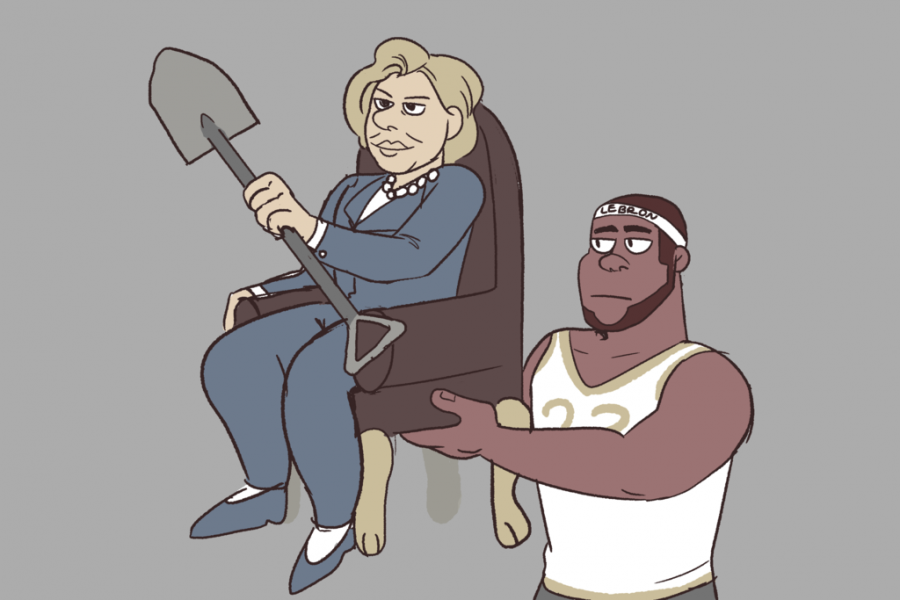 No, if she wants to be president, she should reel them in herself with her ideas, visions, and values. People need to be loyal to her, not to Lebron James, Jay Z, or Beyonce.

Using celebrities to attract people is a common advertising technique, sure, but to advertise the leader of our country?

Filling the holes of our country isn’t as simple as that. In the end, Lebron James isn’t going to be the one with the shovel, filling what’s empty.

If Hillary is the right person for our country, she should prove it by showing voters her blueprint of how her ideal society would be run, and how it will work.

The past 30 years, the political establishment has been unsatisfactory for the American people. Because Hillary has played a part in that, it is clear why she feels the need to bring Jay Z along to attract voters, and it explains why she chose to base her entire campaign on why Trump is worse than her, rather than proving her own personal aptitude.

The main thing she presents for her own ideas is the furthering of the “progress” Barack Obama has made in his 8 years in office. Maybe in Obama’s little perfect (and also make believe) world, he has made significant positive progress that must be preserved. Obama said, in a speech for Hillary, “My legacy [as president] is on the ballot this November.”

Leaders shouldn’t care about legacies and glory. If his “legacy” is that which can be destroyed immediately after he leaves, then he didn’t have any incredible impacts on the American people. If his “progress” is so subtle that it can be wiped away on the first day of a Donald Trump presidency, then there wasn’t much progress at all.

At this point in American history, 45 million people are on food stamps, we are $19.5 trillion in debt, there are massive amounts of unemployment, we are host to over 30 million illegal immigrants, we have poor infrastructure, and we have tension with Russia, China, Iran, and North Korea.

These are holes that must be filled. Whose shovel is capable of filling the holes? Whose political plan is sensible enough to fix the nation’s problems?  I know one thing: the answer to that is definitely not Lebron James, Katy Perry, or Jay Z.

Something I’ve noticed when reading and hearing endorsements for Hillary from celebrities and journalists, is that they state what our country needs the president to do, what they need Hillary to do, but neither they or she explain how she plans on fixing them. So, what resonates for me is that she’s going to repeat the same failed policies of the past. That’s one of the most simple concepts in the world: you can’t keep doing the same things over and over again and expect different results.

So, clearly, I’m not a fan of Hillary. I’m not a fan of Donald Trump, either. Neither candidate has proven themselves fit to be the next president. Trump receives a lot of hate, in the media and in our schools, workplaces, and homes. Some of this hate is deserved, and some not. The problem is that when people see Trump’s many issues as a person, they instantly turn to Hillary as worthy and fit to be president. Neither of them are fit to lead our country.

So, what we do is evaluate our options thoroughly and make the right decision. The right decision isn’t the person who brings out Lebron James and Beyonce; as I said, the celebrities aren’t the ones who are going to carry the shovel.

The question of “What is the right decision,” brings up another topic of discussion. Does voting for a third party candidate mean throwing away your vote?

I believe if you find your primary options a no-go (Trump and Clinton), then voting for a third party candidate may act as a way to make a statement. A statement that says you won’t stand for a Donald Trump or Hillary Clinton presidency.

Your vote is your voice, and combined with the voices of all the American people, it can be loud and bold. This Tuesday night, the person we hand that shovel to will either use it to dig a hole of their own, or to fill the holes. The Presidential shovel (not an official thing, I’m making it up) represents freedom, justice, and security for the People. We’re not giving it to Lebron, Jay Z, Katy Perry, or Beyonce, so don’t let that be the reason why you vote.

Vote by your heart and mind. Nobody knows, at this point, how Donald Trump or Hillary Clinton will use the shovel. In the future, we will know.

So don’t let what happens tomorrow shake your life upside down. Just breathe. Life goes on. We’ll see what becomes of it. For now, we must let the simultaneously beating heart of the American people be the deciding factor.