﻿ Anna-Kate Levesque and her tennis legacy 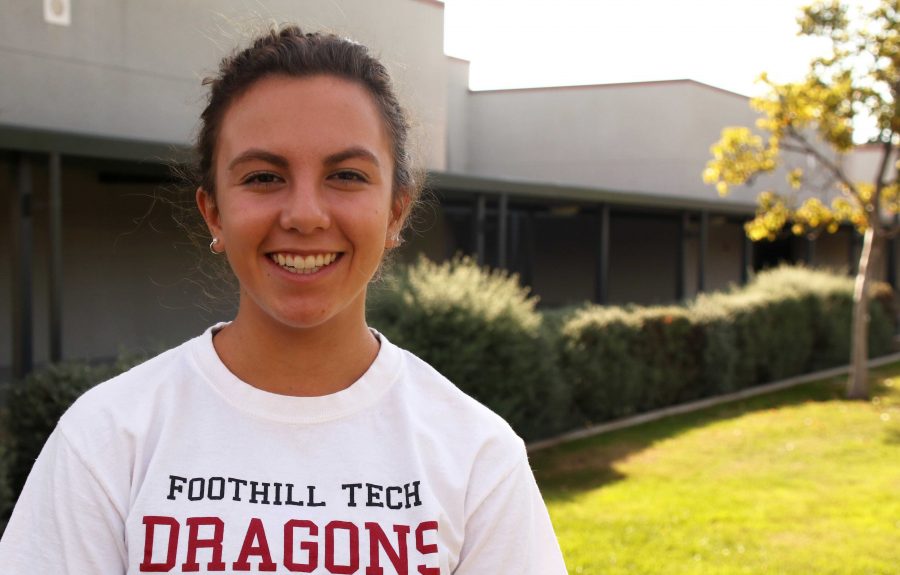 Anna-Kate Levesque ‘17 began playing tennis when she was five years old. Ever since then, she has used the sport as a fun way to relieve stress, and hopes to continue playing as long as she can.

For Levesque, tennis runs in the family. Her whole family has played for generations, so “it’s […] a tradition that I have to play, too,” she says.

Her family isn’t the only reason she plays, though. She describes tennis for her as something to do when she’s bored or as a way to ease her stress. Hitting the ball makes her feel “really powerful.”

It’s no wonder that she hopes to continue playing tennis as long as possible. She says she’ll “keep playing it the rest of [her] life,” even if she doesn’t compete. For the recent future, she aspires to play at the university level.

She has been working to get a scholarship from one of three universities: Point Loma Nazarene University, George Fox University, and University of California Santa Cruz. She is “most confident” in her serve, and hopes this will help her to achieve this goal.

Levesque also focuses on improving her weaknesses. She is “always working out a few kinks” and hopes that once she’s overcome a few of the greater ones, she’ll be ready for university play.

She’s ready to work hard to meet her goal of playing tennis in college; not even an injury will stop her.

She says coming back from her recent concussion was challenging, and she originally felt very “rusty.” Now, she feels that she’s “back where she was” before the injury, but “still improving.”

Ever since she was cleared to play again, Levesque has been steadily improving. She felt she played great tennis with the number one singles play from Thacher.

She described the match as “a really good competition [where] we were both hitting really well. Even though I lost that match, it was the most fun I’ve had [this season].”

According to her teammate, Sherlyn Khouvilay ‘18, that is the type of match that gives Levesque the opportunity to thrive. Khouvilay describes Levesque as “consistent,” with the ability to play “really well in a difficult rally.”

Aside from her play in the matches themselves, Levesque enjoys spending time with her teammates the most.

She says they are the “best part” of playing. She loves how “supportive” and “encouraging” they are and thinks their optimism helps her to be a better player.

“She has this contagious energy within her that spreads to all her teammates,” says Qoshlli. “She’s like the battery of the team, charging everyone up with this energized mindset, and I think that makes her an extraordinary player as well as an amazing friend.”

Levesque has also left a lasting impression on her younger teammates.

Khouvilay says she will “miss everything about Anna-Kate,” from her sociability to her positivity to her “admirable” form of play.

Though one chapter of her life with tennis has come to an end, Levesque looks forward to playing tennis in the future, and is happy to have something to keep her grounded for the rest of her life. For Levesque, tennis is a sport that she “will always come back to.”