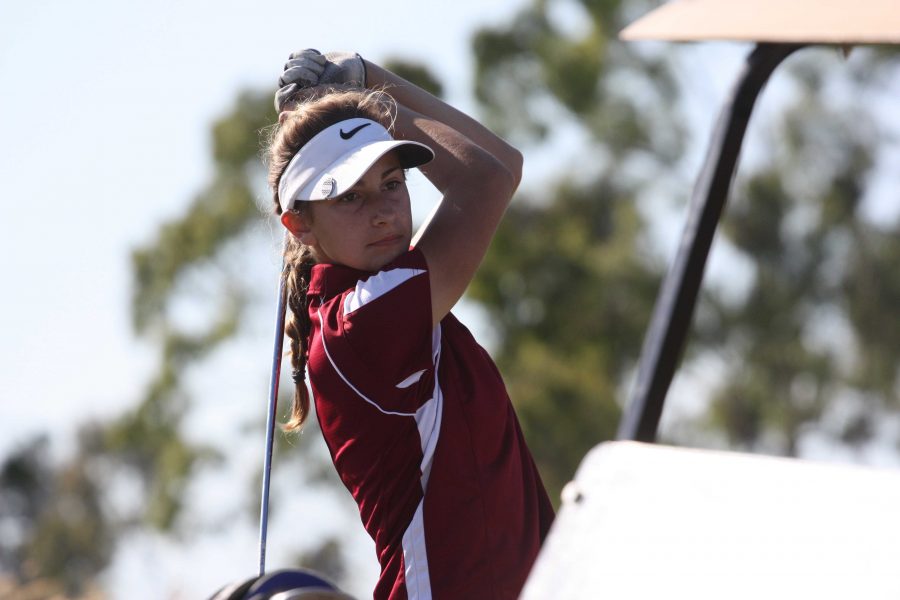 Fenton was first encouraged to play golf by her parents,who both enjoy the sport. While she originally felt “kind of forced” into competing, she is now grateful for her parents’ encouragement because it is has turned out to be “really fun.”

Fenton grew up playing softball as her primary sport but occasionally played golf with her parents. She now competes on both the Foothills girls’ golf team in the fall and girls’ softball team in the spring.

According to Fenton, both sports are fun but very different because golf is more of an individual sport and softball is more of a team sport which has “opposite” types of people competing in each.

“I like both because I meet like a lot of new people in both and they’re like different types of people but […] they both are people that I like to be with,” she said.

Fenton enjoys golf because she is forced to take responsibility for her actions when she makes a mistake during a match. She feels that it is also easier to measure her progress throughout the season. Because she is responsible for her actions, she is able to enjoy her results and scores more when she does well.

“My favorite part is when you hit like a really good shot and then you feel good about yourself,” she said. “And then you make another one after that and you feel even better.”

Although the sport is individual, the team adds up all of their personal scores to get an overall team score. She feels that this brings a sense of teamwork to the game.

Coach Janey Dunn feels that Fenton’s strengths are her “athleticism and raw talent.” She believes that Fenton “supports the team by being a really consistent player” and that the team “can count on her to shoot certain scores.”

Dunn thinks that Fenton is “a quiet leader” because “she leads by example in her attitude and in the way she works during practices.”

“Sammy is a hard worker. She doesn’t spend a lot of time socializing during practices,” she said. “She is focused on her task and is improving because of it.”

Friend and teammate, freshman Hannah Hart, believes that Fenton leads by example on and off the course because she is “really nice and really supportive [of] everyone else.” She feels that Fenton is a positive influence and is able to get the team excited and motivated to do their best.

Dunn believes that Fenton is “coachable” but lacks experience. She believes that experience is key in golf for “your mental toughness, course management, and in understanding your swing tendencies.”

Despite Fenton’s inexperience, Dunn feels that softball has helped Fenton in her new golf career and that her positive attitude and hard work gives her “great potential to go far in this sport.”

“She is a softball player so she knows how to get her weight going through the ball and she has a lot of power doing so,” said Dunn. “She is very consistent and reliable in her play and she’s a hard worker.”

According to Hart, Fenton works “very hard” on the course but also finds school “very important.”

Fenton feels that Foothill is a good school for her because she feels that education is important and that Foothill does a good job of balancing the value of school and sports. She believes that sports are “a close second” but that school is her main priority.

She hopes to go to college and find a job that she “enjoys and that I’m really interested in,” she said. She would possibly like to play golf in college but she is more concerned with just being able to “play and enjoy sports for as long as I can.”