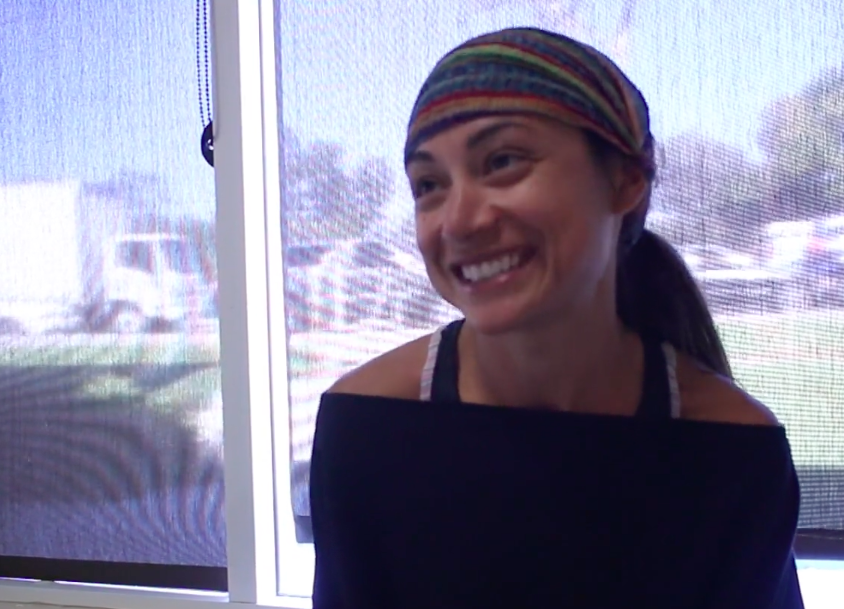 JACKIE MARTENSON: My name is Jackie Martenson, I’m running for City Council member of Ventura. I’m running because I love where I live. I love this city – it’s a great place to have kids, it’s a very family-knit community. I’m running with the intention of keeping it as a family community, and also allowing it to grow in a way that reflects the people of Ventura. In order to do that, I see green-ing Ventura as a big part of my platform.

What’s your background as a Venturan?

MARTENSON: I moved here about 5 years ago, after my daughter was born, my second child, and haven’t looked back. There’s surfing – I probably shouldn’t tell people. Well, that’s okay. Everyone here is from Ventura, but we try to keep it a secret – it’s the best-kept secret.

So, my experience as a Venturan, as I got a little bit older, I wanted to go back to work in production, which is 16-18 hours a day. I was the client of someone in holistic healing and therapy, and she took me under her wing. I’d been working with her and the journey then took me to the schools where now my kids are in preschool and Pierpont Elementary School, so we’re involved there now.

We’ve had some things around the community that we’ve been very involved in. Little things – graffiti that we’ve covered up or situations on the beach that even pertain to open carry for certain people who are not police officers. Not having held an office in Ventura, but being active in my community and continuing to strive to be active.

Which measure on the ballot are you most passionate about and why should students and their families also support it?

MARTENSON: So this one, actually, as I was going into the farmland to talk to some of the farm owners, I want to say the one I’m most passionate about right now might be the one that I know the least about, and that’s what I’m trying to find out: who wrote these measures, why is it next to certain signs, just kind of seeing what’s the backing for everything.

The farmer I talked to yesterday at a stand, for instance, was mentioning yes on something where yes means no and no means yes, so I’m not really sure, but I know that they obviously want to keep their farmlands open, and that’s super important to most people here, and it should be to everyone if it’s not because we can’t be self-sustainable without having our food close by.

So, if that takes maybe using a certain land that is too dry or has had pesticides on it too much and we don’t want to use that land anymore that’s fine. We need to make sure that those farmlands are moved around in a way that obviously the farmers are equated into the equation and compensated, as they should be, or relocated.

It has to do with permaculture, that’s really where my heart is right now, and I don’t know that much about that either, but I know that we have to lay out our farmlands and utilize them in a way that makes sense. There’s a drought, we don’t want to use pesticides, there’s too many bugs, climate change is causing increasing problems and we need to be at the forefront of that, not re-act to it.

Two measures it seems Foothill families care about are Measure R and the measure extending the SOAR initiative. Do you support either, both, or neither of these measures? Why?

MARTENSON: I don’t know if there’s a yes or a no right now for me, because I want to just find out if, for instance, if one says ‘well don’t touch the zoning,’ I don’t know if we can just not move things around, but I don’t want to take away any of the farmland or take away from the farmers, at all. We need those guys and ladies. Their our life, unless we stop eating. So, I would say yes on SOAR, yes save the agriculture, yes.

How do you plan to strengthen the partnership between the school district and the city, and involve more students in local government?

MARTENSON: This kind of ties into my platform. This I can do both at a local and a national level. I am not only trying to green the city, but would like to green the planet. In order to do that, I need everybody’s help. So, if we have the same agenda, then you also need my help. It’s a global issue starting at the local level.

I’m also working with the Green Party, they are a global institution. You can forget about the election and the presidency, no one wants to talk about it. But, I’m working with them as far as raising that consciousness. We’ll be meeting Wednesday for that as well, we’re going to bring a group here, locally, as well. And that directly gets kids involved in greening, no matter what. Kids can’t vote, so they can’t even be biased about it.

So it gets them involved on a green level, and then they take in interest knowing that they can make a change. I’m going to be speaking there, so they can come, they can watch, and they can say ‘Oh! It’s in our hands, we can make a difference! Oh, Jackie’s running for City Council. Oh, maybe someday she’ll be president.’ It’s the Green Party, anybody can do it. So let’s start here, and that will make a difference in government. We are the government. It starts here.

What do you think is the most pressing issue facing our city today and how can it be addressed?

MARTENSON: I want to say homelessness, but then I also want to say climate change. I think they’re all tied together. But going with homelessness, I don’t like seeing people in the streets, it’s heartbreaking. There’s not an easy answer. Some people I’ve talked to have schizophrenia, if they have a violent tendency with a mental illness, that makes them act out.

I’ve heard that there are great programs in place in Ventura addressing the homelessness issue. You won’t see families out, whether they’ve been picked up or brought to a shelter. So that’s something I’ve learned more about, the rehabilitation side. If someone needs medical treatment, mental treatment, therapy, are they down on their luck, they have a substance abuse problem, then let’s make sure those people go in the category of rehabilitation and mental health, and not into the direction of incarceration. Because that doesn’t make much sense to treat disease that way. Again, it’s not a yes or a no. I wish there was world peace but, we’re working on that.

MARTENSON: I think just living as a model, doing whatever you’re doing that makes you feel like a better person. And acknowledging your mistakes, because I’m going to make mistakes – and I should make mistakes.

If I didn’t then someone’s going to be like ‘Ugh, I can’t run for City Council, you have to be…’ what, already in City Council? What are the requirements, really? It’s just talking to people and finding out what they want. Usually it rings true with what the truth is, and what you want for your community as well.

Is there anything else you would like to say?