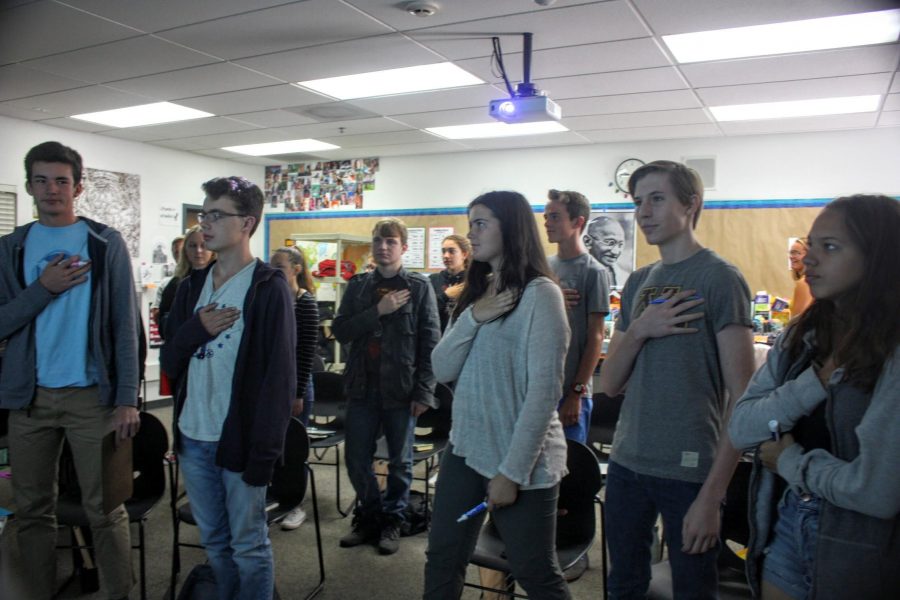 Last Tuesday, students visibly displayed a wide array of emotions when Campus Supervisor Dana Eaton announced that Foothill would now take time every day for a “patriotic observance” session during the daily announcements.

The day the observance was implemented, the school was asked to stand and recite the Pledge of Allegiance. Most students did as they were asked, while other students chose to sit or stand without reciting.

Principal Joe Bova clarified that the school will “probably do the Pledge three days a week” and the other two days, the staff will be “pulling curriculum from ‘This Day in History.’”

As for the reasoning behind the new implementation, Bova said the “education code is pretty clear about it — you should be doing [a patriotic observance] each day.” He also revealed that the staff “had discussions recently about it, and so we’re going to reimplement it again.”

History and government teacher Cherie Eulau isn’t surprised by the recent enforcement of the Education Code’s policy because parents and community members “get upset that schools aren’t doing it” because “someone could potentially sue [Foothill] and the district if we’re not doing it.”

Eulau also explained that the government teacher in her likes the “mild controversy” that comes with the current implementation because “it does this kind of thing where people ask, ‘Why are we doing it? Is it worthwhile?’ […] I like when we discuss why we do things; that’s what we teach you to do, is question authority.”

As time goes on, Eulau is curious to see whether more students choose to sit or stand.

“If they’re not standing, [is it] because they feel like they really don’t want to be pledging allegiance to our flag or they just don’t want to stand up?” she pondered.

Junior Vineta Sondors believes that recent events in the media involving Colin Kaepernick “sparked everybody’s agitation,” so now “Foothill’s authorities are trying to introduce it to us so that we don’t lose our patriotism.”

As for her personal opinions on the Pledge of Allegiance, she’s on the fence between both sides: “Seeing as my parents both emigrated from third world countries into America, […] it is a great country, there’s lots of opportunities, [and] it is important to show patriotism to your country.”

“But, at the same time,” Sondors continued, “our country’s really flawed right now. Whether you stand or sit for the Pledge of Allegiance, I think depends on your personal opinions and views.”

Feeling similarly, junior Joshua Hager has recently chose to sit during the Pledge of Allegiance because he believes the American military “stands for oppression worldwide.”

“Because of the systematic violence, the systematic oppression […] that America enforces through its military and police, […] I can’t bring myself to stand during the Pledge,” Hager said.

Hager feels that the “Iraqi invasion of 2003, the continuing killing of civilians in Syria and Iraq, [and] the secret bases all over the world,” present the American military as a “very aggressive, very deadly force,” which is why he chooses not to stand for the Pledge of Allegiance.

Senior William White believes the “enforcement on the Pledge of Allegiance is kind of absurd.”

If people look uncomfortable when White chooses to sit for the Pledge of Allegiance, he will “stand up for the comfort of others, but [he] will likely sit down when that doesn’t happen [because he] doesn’t deem it as something necessary.”

White said, “I’m very neutral on the [implementation], but I don’t agree with the enforcement of having to do so either. […] I think that’s something that should be changed in the Educational Code, because, bottom line is, patriotism is earned, it’s not enforced.”