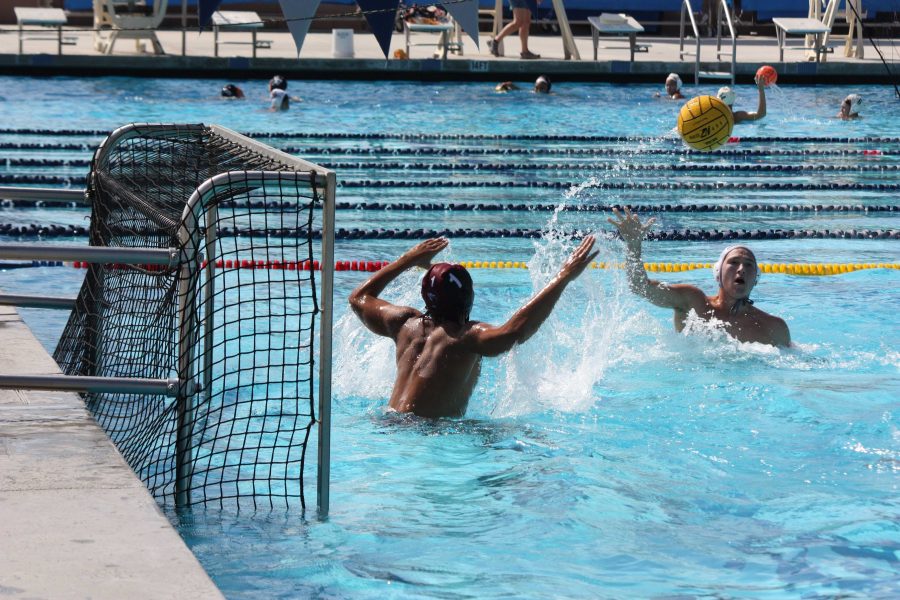 The sun radiated on the Ventura Aquatic Center pool as senior Evan Somma attempted to shoot a goal in Santa Ynez territory. Somma missed, but junior Andres Coppa grabbed the rebound for the Dragons and scored, giving them the first goal of the game.

The boys’ water polo team was competing with the Santa Ynez High School Pirates at Ventura Aquatic Center. The Pirates defeated the Dragons with a final score of 20-8.

After numerous attempts from both teams to score, Coppa finally scored the first goal of the game with four minutes and 23 seconds left in the seven minute quarter.

In retaliation, Santa Ynez shot and scored themselves, tying the score up at 1-1. Foothill wasted no time, as sophomore Tyler Liddell scored his first goal of the game to give the Dragons a 2-1 lead.

Santa Ynez had no problem returning the favor, as they went on to score five more goals in the final two minutes of the quarter, ending it with a 6-2 lead.

Once the second quarter began, Santa Ynez got out to a fast start, scoring another five goals in the first two-and-a-half minutes. Junior Garrett Mann tried to respond to the Pirates’ scoring spree, but missed the shot. Santa Ynez then succeeded in adding to their lead, scoring another three goals with two minutes left to play in the quarter.

The very next play, Somma was given a penalty shot. However, Somma missed and the Pirates scored again, raising the score to 15-2.

Foothill retaliated rapidly, scoring with six seconds left on the clock. The buzzer sounded, signaling the end of the first half, and the Dragons trailed the Pirates with a score of 15-3.

The third quarter started out fast, as both teams were notably aggressive. Coppa broke the ice for Foothill, scoring the first goal of the quarter. Seconds later, Somma followed suit and scored as well, bringing the score up to 15-5. According to Wallace, this was the most exciting play of the game.

As the Dragons retrieved first ball in the fourth quarter, they advanced the ball into Pirates’ territory. However, the ball was stolen and the Pirates promptly scored in the very next play.

Coppa attempted to score once more for Foothill, but he missed the shot. Santa Ynez retrieved the ball and proceeded to score with three minutes left in the game.

As the clock wound down, Santa Ynez kept control of the ball until the game ended. The Pirates defeated the Dragons with a final score of 20-8.

Despite the loss, junior Michael Aguilar felt that the team “played very well.”

“We worked together and we kept our cool,” he said.

Aguilar also described the tone of the game as “relatively aggressive.”

Garrett Mann believed that the Dragons could improve on “coordinat[ing] more as a team.”

“We have a mission to advance the ball into the frontcourt,” he said. “We need to come back with as much energy as [Santa Ynez] did.”

The Dragons are scheduled to play an away game against Newbury Park High School on Sept. 22. They plan to build on their aforementioned qualities of advancing the ball and playing with energy.