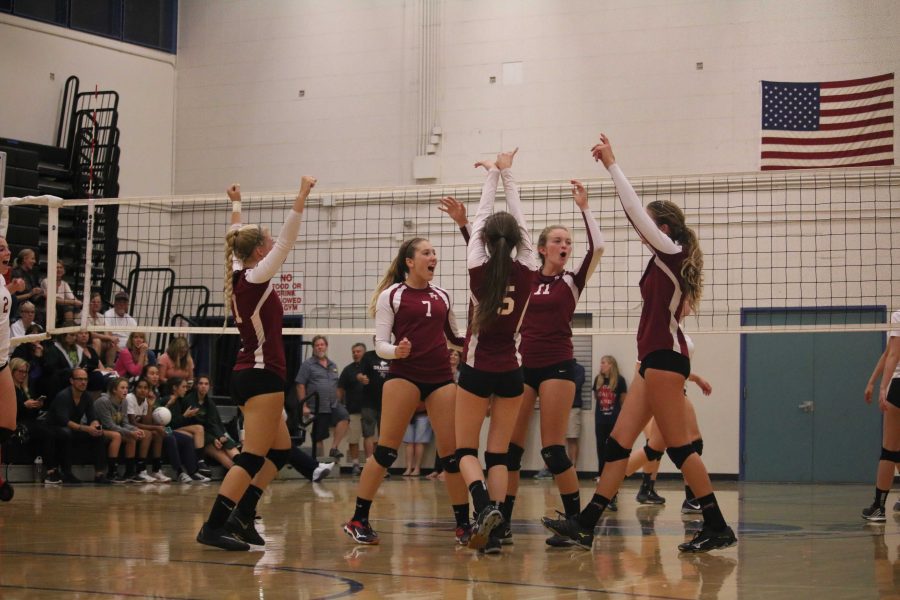 After two intense games by the freshman and junior varsity teams, the varsity girls’ volleyball team took the court. The crowd was packed and full of energy, ready for the Dragons and their first home game of the season.

After two intense games by the freshman and junior varsity teams, the varsity girls’ volleyball team took the court. The crowd was packed and full of energy, ready for the Dragons and their first home game of the season.

The Dragons kicked off the first set with a kill by sophomore Lexi Malone. Foothill was called out of rotation and several passes didn’t meet their targets, costing them a few points in a row. After a long rally and hard fought plays, La Reina came out on top with
a score of 25-14.

Following three points by La Reina to start the second set, junior Morgan Gallagher drilled home a kill off of a pass from junior Setter Taryn Savard, who had 14 assists in the game. The crowd was excited, but the set began to slip away from the Dragons after an ace from La Reina, leaving the score at 2-7.

The score went back and forth for a few possessions, the Dragons fighting to stay in the game, with passing from Junior Libero Faith Mackie and setting from Savard leading to outside hits. The Dragons still found themselves down seven points, with a score of 6-13.

A few plays later sophomore Pearl Esparza hit an ace, bringing the Dragons closer, at 10-16. Malone, Gallagher, and junior Heather Ellison each had a kill towards the end of the set, but the Dragons lost the second set, 15-25.

Senior Payton Grenier had a block to start the third set off, and the Dragons were on top at first, 2-1. However, outside hits and several aces gave La Reina a boost and they went on a run to go up 6-2. Ellison and Malone each had a kill further into the set, and the score landed at 5-10.

Malone felt that the team had room to improve when it came to their serves.

“I think we still need to work on our serves a little more and we’ll get it [soon] because we’ve been working on it a lot in practice,” she said.

Mackie agreed the team should improve their serves, and went on to describe a drill the team runs that re-enforces the skill.

“[The] worse parts [were] missing our serves,” she said. “We do a serving game [at practice] where one person has to serve in a row and if we miss, the whole team has to run so it’s [supposed to be] a motivational thing.”

After the ball ricocheted off the side of the gym wall, the Dragons managed to bring the score to 18-22. They would not get any closer in the set, losing 25-18.

Despite the loss, first-year Coach Kris Gullatt feels proud of the way the girls played against the tough competition.

“It’s my first year but I have to think that’s the best that any Foothill varsity teams played,” he said.

“La Reina’s a really good team. We’re in Division V, but [La Reina] could easily hang with some of the Division I teams, so I’m proud of the girls and the way they played today.”

In order to improve for their next game, Gullatt feels the Dragons need to become more refined and be able to think logically when they have to make split moment decisions.

“I just think ultimately they need to get a little bit more polished,” he said. “In the sense [that] they got put in hard spots where they were required to come up with a big play in a pressure filled moment and I don’t think they’re quite used to being able to do that at this level.”

Even considering the skill and talent of La Reina, Gullatt emphasizes his girls should believe in themselves and believe they can beat any team, and this will give them the power to come out on top.

“Ultimately La Reina played with a little more confidence, consistently than we did,” he said. “I think the girls just [have to] believe more. If they really believe they can hang with these top quality teams they absolutely will.”