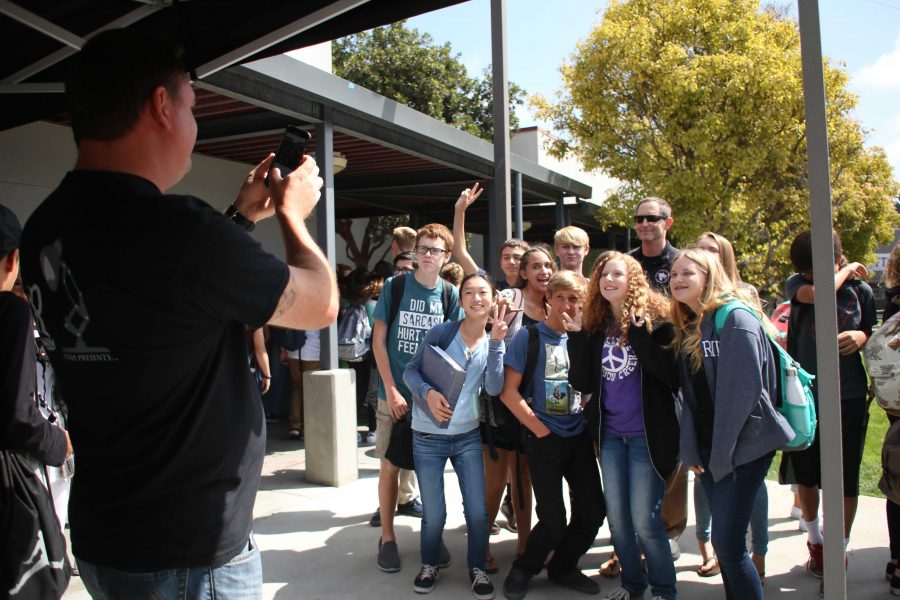 “What’s the importance of graduation?” This question was answered by the staff and freshmen of Foothill as they participated in the annual “Start Strong” Rally on Friday, Sept. 2.

The Class of 2020 was welcomed into Spirito Hall, where the freshmen were separated into their Foothill Intervention, Reinforcement, and Enrichment (FIRE) groups to be given instructions and some words of motivation before they set off on a scavenger hunt around the school.

The hunt required them to visit and answer questions about different areas of the school, take pictures with certain teachers and the Foothill Dragon, and hashtag those pictures with #ss2020. The team who finished first received muffins as their prize.

Once a team had completed all the requirements of the hunt, they went to the Black Box where they took the traditional picture with a Foothill diploma and signed a graduation gown to symbolically ensure their commitment to graduate.

Freshman adviser Kristen Pelfrey began the rally by discussing its purpose, then followed with a few inspiring words. Self-dubbed “Mothership,” Pelfrey explained that the rally was “about getting more comfortable with Foothill, and its environs.”

She then stated that the goal of all the staff on campus was to make sure that the students have “all options open.” After, Pelfrey gave some brief instruction, and the freshman were on their way to explore the campus and its staff.

Another freshman adviser, Conni Carr, commented on the interactive aspect of the rally this year. “[The students] got the chance to meet and chat with admin and different teachers on campus,” which “gave them exposure and a chance to wander around campus and go some place other than their normal classes,” she said.

Joe Bova, principal of Foothill, had students swarming around him, eager to take a picture with him to advance in the scavenger hunt.

Bova also believed that this rally gave a great opportunity to familiarize with the campus.

“A big goal of the rally is for freshmen to have fun, and secondarily to meet new people and to not only interact with the teachers and staff, but also to interact with their fellow FIRE students so they can bond as a group as well,” he said.

Freshman Sophia Parker felt that the rally made “everyone more comfortable with their FIRE group, and have a lot of fun, and made them feel like [Foothill] is their home.”

Freshmen Eugene Murphy confirmed that he definitely felt closer to his FIRE group after this event, and “got to know the school.”

Ryan Duston, who is a biology teacher at Foothill, was the creator of this event and previously served as the event coordinator.

“Freshman orientation and the scavenger hunt are the two events that I think really hook freshmen into understanding the culture of Foothill, and start creating that culture for their own class,” he explained. “It’s a great event because the freshman really get to learn the history [of Foothill], and who some of the people are who are running the show.”

By the conclusion of the rally, every FIRE group had taken a picture and had committed to graduate, and were all rewarded with some edible treats.

As many of the freshmen and staff at the rally agreed, the essential goal of this event was to allow students to have fun with their peers and get to know their campus, and also understand the importance of keeping all of their options open