The EpiPen price raise is immoral 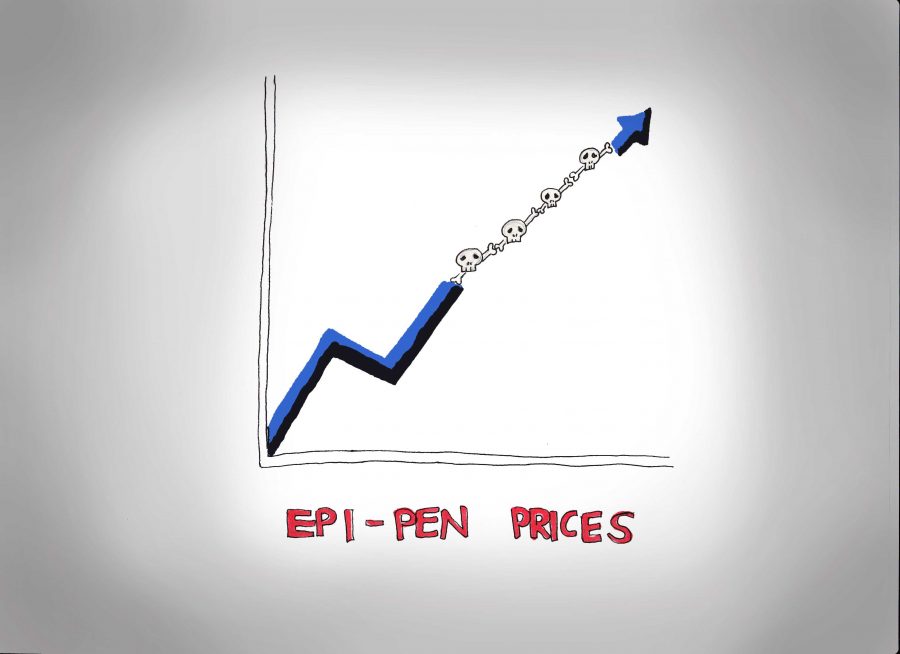 I am just a high school student with the fears and hopes and ambitions that every teenager has. I know nothing of what goes in the minds of, say, CEOs, those materially successful people who are the monarchs of our economy.

I do know this, though: a company, whether for profit or not, should not overstep the bounds of morality.

You may have heard the ruckus going on lately about the increase in cost for the EpiPen. Why is this such a big deal? Epinephrine is a form of adrenaline, which can be administered in shot form as the product EpiPen.

It is used for people with life-threatening allergies, buying them a few life-saving minutes by delaying the effects long enough for emergency services to arrive and continue medical care.

It is not enough to simply emphasize that it saves lives. If EpiPen is inaccessible to certain people, one encounter with peanuts, for example, can be deadly.

Mylan, a pharmaceutical company who bought the company that originally sold EpiPens largely dominates the market for epinephrine. In short it has a monopoly on the medicine. In the past nine years its annual revenue has increased from $200 million in 2007, to $1.1 billion in 2016.

The price of a two-package EpiPen has soared rapidly in the past years, from around $100 to the $600 mark right now: a 500 percent increase.

The most unfair thing is that parents are forced into making certain decisions that could fatally affect their children. The price plants insidious doubt that can cause huge repercussions. Is it really necessary to spend so much money on a precaution? What if this incident I’m dreading never happens? What about my other children?

The cost of EpiPen, combined with the fact that the drug expires every 8-12 months and must be replaced, is astronomical. Considering the amount of epinephrine inside each shot is only worth about $1, Mylan’s decision to raise the cost even more outrageous.

Epinephrine is a safety net, a precaution in the event that an allergen contaminates the food of people with severe allergies. Without it, they die. Is it too much to ask for EpiPen to be affordable?

That is not to say there aren’t logical reasons for raising the price. Business is business after all, and we have a capitalistic economy. Not every company that raises the price of its merchandise is cutthroat with unethical practices. Not everything can be charity; the company needs to survive as well.

However, does it justify raising the price of a life saving drug that equips homes and schools by 500 percent? No. There are people with severe allergies, people who are in danger, people whose lives matter far more than an atrocious marketing strategy.

It’s a grim situation. Do you have a friend with an allergy? When we think of allergies, what usually comes to mind are hives or a sniffly nose, a little redness in the face for a few hours, no big deal. To others, it means pain, panic, suffocation, and even death.

The fact that Mylan is taking advantage of being the only major seller of epinephrine, and then jacking up the cost of a device until it is unaffordable shows a total disregard for the means of people with allergies and their families. Mylan is toying with people’s’ lives, and no one gave them the right to do so. No one should have that right.

Like I said, I’m only a teenager who thinks she’s looking at something wrong. Yet I know my logic and my gut feeling are in agreement with each other on this. It isn’t good. It isn’t right. It’s despicable.