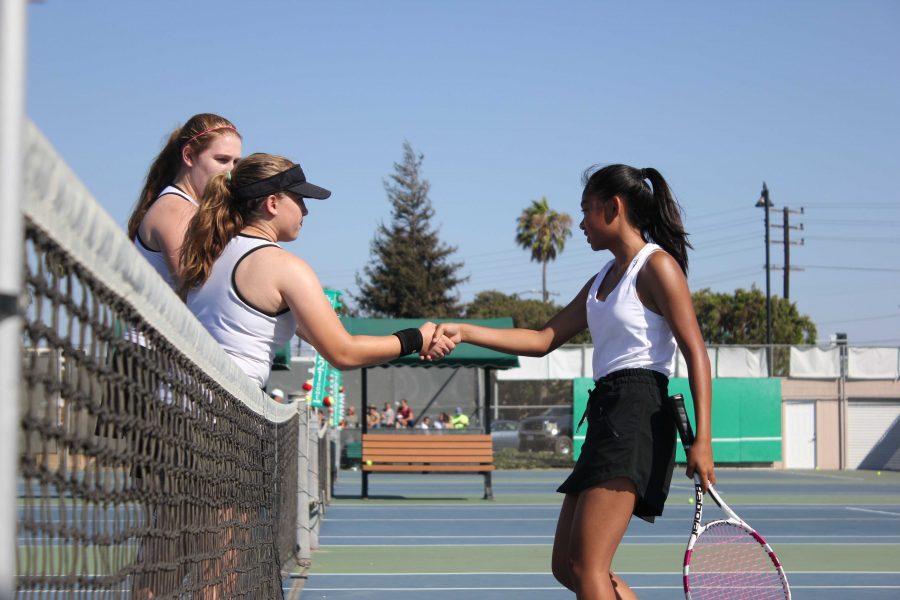 The sun beat down on the Foothill girls’ tennis team as they competed against Saint Bonaventure High School in their first home match, held at Ventura College. The Dragons crushed the Seraphs 17-1 during their first home game, sparking high hopes for the rest of the season.

Sophomore Erin Gaynor started strong, sweeping her opponent win after win. She defeated her opponent with individual set scores of 6-0, 6-1, and 6-0.

Gaynor felt that she played “pretty well” during the game because she “worked really hard” at playing the “mental” part of the game.

“I visualized myself playing the game, and taking the steps required to win. I think that that’s a huge part of being able to win,”she said.

“It’s seeing yourself with […] the win and making that shot to win it all, being able to visualize it and then execute it.”

Junior Enkela Qoshilli was trying to “get some of the rust off” after having been in Europe for the summer. Despite her recent absences at practices, she felt that she “got some good serves in” and came out on top with three 6-0 wins.

Qoshilli believes that she has a lot of areas to improve on, but is hopeful that gathering experience throughout the season will help her to better her skills, specifically in the area of strategy.

“The more you play, the more experience you get,” she said. “Tennis is very strategic. It’s more like a chess game in your head rather than just like hitting the ball randomly and sporadically and [that’s what] differentiates a good tennis player versus a mediocre one. So, that’s what I would like to achieve. I would like to be more than mediocre.”

Similar to Qoshilli’s value of strategy, Coach Brad McClain engrains the importance of the fundamental skills of tennis into the team.

“We work hard on the serve, and the return of serve,” McClain said. “If you can’t put the ball in play, it doesn’t matter how good your volleys and overheads are, you never get to hit them.”

Senior Alysa Elliott continued the Dragon’s win streak with another sweep during her first Foothill home game ever. Elliot transferred from Ventura High School tennis to the Foothill team this year. She defeated her opponent with set scores of 6-2, 6-2, and 6-0.

Senior Summer Khouvilay and her sister, junior Sherlyn Khouvilay, triumphed over Bonnie in their first set with a score of 6-0. Freshman Leah Sehati and freshman Astrid Dalton subbed in for the sisters and ended in a 6-0 victory as well. The Khouvilay sisters came back for the third set and gained another win for the Dragons.

Freshman Leah Sehati and freshman Astrid Dalton subbed in for the sisters and ended in a 6-0 victory as well. The Khouvilay sisters came back for the third set and gained another win for the Dragons.

Sherlyn Khouvilay “really enjoys” competing alongside her older sister because they get to spend more time together. She believes that their close relationship helps them play “better” on the court.

“It’s really fun, I think it’s a lot better than singles […] because you have a partner there and it just lifts the whole like spirit of the game [because] it’s not as serious,” she said.

McClain feels that the team consists of a “very good” and “tight-knit” group of girls who support each other. According to him, “it’s not about me, it’s about we.”

Senior Laina Feath and freshman Alyssa McClain competed and won in three doubles matches. The pair won with individual set scores of 6-1, 6-0, and 6-0.

Teammates cheered as senior Emma Kolesnik and freshman Ella Duganne won their first two sets 6-0 and 6-0. The duo then competed in a tiebreaker set but eventually fell to the Seraphs 6-7.

Coach McClain believes that the team “played great” and is the “strongest” team Foothill has ever had. He hopes the team will continue to improve, prepare for their league matches, and eventually be able to compete in the playoffs.

“I would love to be able to make the playoffs in this higher bracketed league,” he said. “Time will tell.”