Answers begin to emerge at hearing on Ventura oil spill 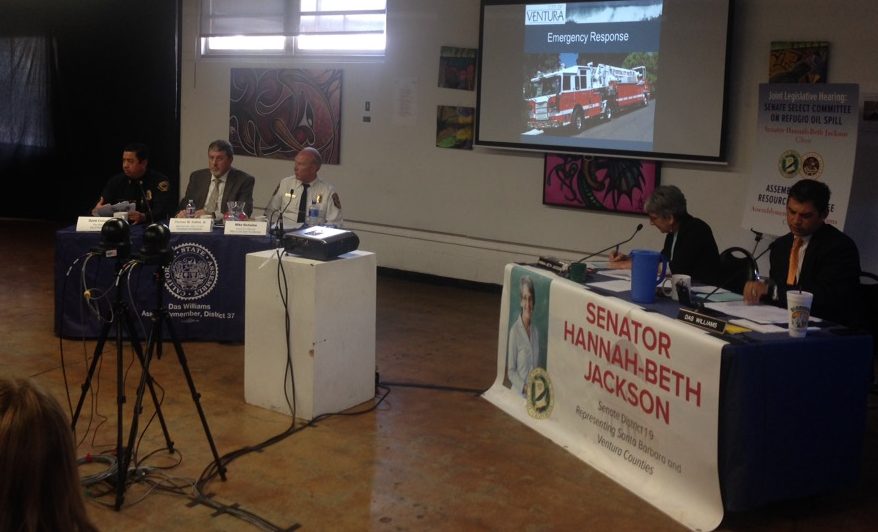 A public hearing was held yesterday afternoon concerning the oil spill on June 23rd, which ran down Hall Canyon until it was stopped short of reaching the ocean. The spill, referred to as the “Grove Incident,” has raised questions about pipeline safety and inadequate communication with the public.

The main purpose of the hearing was to listen to community concerns and gain more information about the cause of the spill and how similar spills could be prevented in the future.

The hearing, hosted by Assemblymember Das Williams and Senator Hannah-Beth Jackson, was held in the Bell Arts Factory community room, which serves as a gallery space as well as a venue for events. Jackson said she wishes the community were gathering to admire the art in the gallery “and not to deal with a problem that shouldn’t have happened in the first place.”

Both Jackson and Williams would like to see California move towards renewable energy and not depend on fossil fuels, although they agree that for the time being, pipelines are the safest way to transport oil.

“If we’re going to ask a lot of nitpicky questions, it’s going to be because we want to find out all the ways that this can be done better, not just as a ‘gotcha’,” Williams said.

The two asked questions of four others on the panel: Mike Richwine, Acting State Fire Marshal, Thomas Cullen, Administrator of the California Office of Spill Prevention and Response (OSPR), David Endaya, Fire Chief for the City of Ventura, and Larry Alexander, president of Crimson Pipeline, the pipeline that the spill originated from.

The spill was first reported around 5 a.m. on June 23rd by a resident who smelled oil. First responders from the city fire department arrived at the scene shortly afterwards and realized the scope of the problem, calling in help in an attempt to block the oil from reaching the ocean.

The oil was indeed blocked, and in the evening the Fire Chief transferred command to state departments and Crimson Pipeline. After repairs and cleanup, the pipeline was returned to use on July 1.

The quantity of oil spilled in the Grove Incident is estimated to be 45,000 gallons (1,074 barrels). Of that, 19,992 gallons of pure liquid oil have been removed, as well as 40 twenty-yard bins of contaminated soil, according to Cullen.

Several community members asked the same question during the public comment period: Where are the other approximately 25,000 gallons of oil that have yet to be retrieved?

Cullen said that although “we’re not finding big pools,” it is possible that some has evaporated or sunken deep into the soil. In addition, some of the “missing” gallons may be accounted for once the oil content of the soil removed from the site has been determined. Air quality tests have indicated no harm to the public.

The leaked oil was detected the day after a new valve had been installed, which some suspect caused the problem.

“Do you believe this would have happened if the valve had been installed properly?” Williams said. Crimson’s representative said “it would be inappropriate” to pin down the valve as the cause of the leak, as the investigation is still underway.

Several community members at the hearing expressed the opinion that the pipeline should not be in use while the investigation continues. To return the pipeline to service after the leak was repaired, Crimson was required to pass a pressure test, witnessed by the State Fire Marshal’s office.

One issue discussed at length during the hearing was that the leak was reported by a citizen and not by Crimson’s leak detection technology, which does not work optimally during repairs.

Another point of interest was the method by which the public was notified of the pipeline’s return to use. The notification came as a call to the city fire department by the State Fire Marshal’s office. Residents asked for clearer communication in the future.

According to Alexander, Crimson has spent almost $2 million on cleanup, and will continue cleanup efforts.