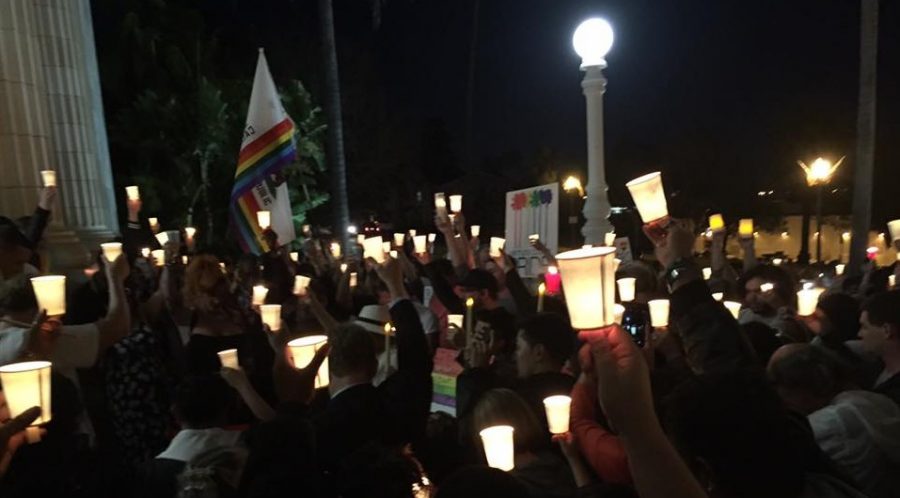 Candles lit up the steps of City Hall last night, however, this was no celebration. More than 225 supporters of the LGBTQ+ community marched from Paddy’s Bar & Lounge to City Hall to mourn, pray for, and remember victims of the Orlando nightclub shooting.

Pride flags, posters, and lights accompanied the mourners on their procession through downtown Ventura. Attendees varied in age and background, some were even Foothill students.

The mass shooting, now considered the most severe in United States history, targeted a LGBTQ+ nightclub and resulted in 49 deaths and 53 more wounded. The shooting, also the deadliest act of violence against the LGBTQ+ community, marks another Pride Month with hate and bigotry.

Ventura mayor Erik Nasarenko and City Council member Cheryl Heitmann were present at the event and shared some words after a brief moment of silence for the victims.

“What I see today is light,” Nasarenko said. “The light of hope, the light of love, and the light of compassion, and the darkness will fade and this light will triumph.” He, as well as Heitmann, spoke about Ventura’s commitment to protecting the rights and equality of LGBTQ+ individuals.

Steve Somann, president of Diversity Collective, shared a statement on the shooting.

“Now more than ever we need to come together as a nation, as a state, and most of all, as a community, to affirm that above all else love really does win,” Somann said. Representatives of Jacqui Irwin and senator Hannah-Beth Jackson also spoke to the crowd, expressing similar sentiments.

At approximately 9:30pm, after a prayer for the victims, the crowd put out their candles and dispersed.

“The best thing that honestly we can do is we can stay active and stay engaged, we can engage our elected officials, we can keep the conversation going,” MacDonald said. “We have to let the community know that we’re here, we’re queer, and we’re not going anywhere.”

Gabby Sones contributed to the reporting of this article