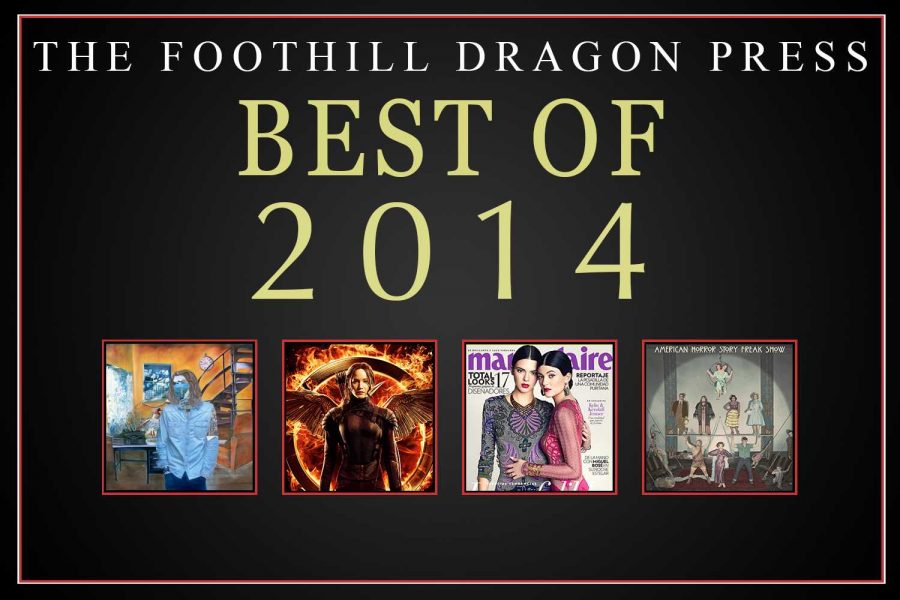 Mockingjay, the third movie of the Hunger Games series, written by Suzanne Collins, continues to follow the clever protagonist Katniss Everdeen (Jennifer Lawrence)  who has managed to survive the Hunger Games twice and unexpectedly finds herself in District 13.  Unwillingly, Katniss becomes symbolic of the mass rebellion and earns herself the representation of a mockingjay. This enthralling film will keep you wondering and guessing what will happen next in Mockingjay  – Part 2. Mockingjay – Part 1 received raving reviews from critics and landed itself as one of the most anticipated films of 2014. By: Brooklyne Shepherd

“Guardians of the Galaxy” is based off the Marvel comic book series, which follows a team of heroes by the same name. Peter Quill(better known as Star-Lord) was abducted shortly after his mother’s death in 1988 by a group of space pirates. 26 years later, while working for the pirates he steals an orb, which takes him on an intergalactic adventure. This movie does a great job of balancing out the tone of the film, by not letting it get too serious. There are times when you will want to cry and there are times when you won’t stop laughing. The great acting, visuals, and Groot made this movie a must see for 2014. By: Sunset Flores

The well known cinematography of producer Wes Anderson appeared as brilliant as ever this year in “The Grand Budapest Hotel.” Known for his quirky productions such as “Fantastic Mr. Fox,” and “Moonrise Kingdom,” Anderson’s “The Grand Budapest Hotel” was not short of delivering odd, yet compelling, storylines and characters. The film follows the mishap-filled events of a concierge and his lobby boy in their quest to prove the concierge’s innocence after he is framed for murder. Winning forty-three awards, and receiving seventy-two nominations, including four Golden Globes, “The Grand Budapest Hotel,” is a charismatic addition to the variety of movies released in 2014. By Meghan Schuyler

Despite the power trouble Sony Pictures experienced when the movie first aired, “The Interview” was a hilarious juxtaposition of two unsuspecting men, James Skylark and producer Aaron Rapoport, turned CIA assassins. Actor James Franco, who played Skylark, did an incredible job at maintaining the ridiculousness of the situation by matching it with equally ridiculous facial expressions. While Franco was being “honey trapped” by North Korean dictator Kim Jong-un, Seth Rogen’s character (Rapoport) focused on completing the mission. The ludicrous nature of this film is what makes it so entertaining to watch and a must see film of 2014. By Paris Shepherd

Irish singer-songwriter Hozier released his first full-length album, “Hozier,” in the United States on Oct. 14, after it’s release in two other countries. The album received great reception. Containing songs from his previous EP’s, Hozier reached the top ten charts in many countries, including Ireland, the United Kingdom, and the United States, among others. His widely-popular single “Take Me to Church,” has been nominated for “Song of the Year,” for the 57th annual Grammy awards, and was noted as the “Most Viral Song,” in Spotify’s “Year in Review.” Hozier’s use of meaningful lyricism, mixed with rich and soulful vocals results in an exceptional bluesy-soulful debut album that is compulsively listenable. By Meghan Schuyler

Walk the Moon released their single “Shut Up and Dance” in advance of their newest album, “Talking is Hard”. The full album was released on Dec. 2, 2014 and quickly claimed the number four spot on iTunes on the same day. The pairing of fun lyrics with killer vocals makes this indie pop album one of the best in its genre. This album also features loud, catchy choruses that reflect the kind of energy that Walk the Moon produces in their live shows. By Paris Shepherd

Ed Sheeran released his second studio album “X” or “Multiply” which went worldwide on Jun. 23, 2014. “X” was an international success in its first week on sale, charting at number one in twelve different countries, topping both the UK Albums Chart and the US Billboard 200, and reached the top five in eleven other countries. The album was praised and received numerous positive reviews from music critics. By Brooklyne Shepherd

“The New Classic” is Iggy Azalea’s debut studio album that largely popularized her name. Her song “Fancy” which features Charli XCX, made it to number one on the Billboard’s charts and has stayed on it for 39 consecutive weeks. This album has a lot of hip hop and pop influences, and also features artists like T.I. and Rita Ora. The catchy nature and Iggy Azalea’s unique voice made for a great album. By Sunset Flores

Created by Brad Falchuk and Ryan Murphy, American Horror Story: Freak Show will have chills running up your back and keep you on the edge of your seat. American horror Story is an anthology that sets its focus around different quirky characters and eerie locations, including a haunted house, an insane asylum, a witch coven, and a freak show. Although the first season of American Horror Story aired in 2011, it still has the ability to captivate its audience since each of the show’s storylines have their own beginning, middle, and end. By Brooklyne Shepherd

Based on the comic book series written by Robert Kirkman, this graphic drama portrays life in the weeks and months following a zombie apocalypse. Although “The Walking Dead” first aired in 2010, this gritty drama is half way through its fifth season; the second half of season five is said to air Feb. 8, 2015. This zombie-filled drama keeps viewers invested in the lives of its human characters, making it a great show that you won’t want to miss. By Paris Shepherd

Parks and Recreation is set in the rural town of Pawnee, Indiana. The show follows the lives of local government workers, which doesn’t sound all that funny, but Parks and Rec never fails to make me laugh. The show first aired in 2009, but Parks and Rec started its sixth season during 2014. Season six was kicked off with a bang when a pregnancy was announced and an overseas trip went wrong. If you need a quick laugh, hop on Netflix and watch Parks and Rec. By Sunset Flores

“Girls,” Lena Dunham’s relatable comedy returned even more entertaining than before with the third season of the show. A more honest version of “Sex and the City,” “Girls” follows a ragtag group of friends in their twenties dealing with day-to-day life in New York City. Although the plot sounds extremely cliche, the show is not over-romanticized, and depicts the realities of this lifestyle in a humorous and relatable way. Dunham’s show has won 2 Golden Globes, among many other awards and nominations, and is refreshing take on a hackneyed plot. By Meghan Schuyler

It’s fair to say that both Kendall and Kylie Jenner have majorly influenced the fashion world over 2014. First, Kendall made waves in the modeling industry by appearing on the Fashion Week runway in New York, London and Paris. However, younger sister Kylie Jenner managed to keep up with her dynamic hairstyles and lipstick trends. These trendy sisters dressed to impress all of 2014 and that’s why they are two of fashion’s biggest icons. By Paris Shepherd

Over the course of 2014, Lupita Nyong’o has captivated the fashion world with her incredible style. Much of this recognition comes from her impeccable red-carpet appearances. Lupita’s signature looks are built around clean line and bold colors, featuring brands like Miu Miu, Prada,and Chanel. Her unique style makes her a definite fashion icon of the year. By Paris Shepherd

Throughout the previous year, black and white was a major trend. Whether seen strutting down the runway or walking the streets, black and white inspired clothing dominated this year’s fashion industry. Various fashion industries were competing with each other for the hottest designs and incorporation of these two pivotal colors. This past year, fashion icons like Kendall Jenner, Solange-Knowles, and Ashley Greene have popularized this trend with their personal takes on black and white.  By Brookylne Shepherd

It is said that history repeats itself and this is definitely true for fashion. For example, the 80’s have made a comeback with grunge fashion. The grunge movement started in the mid 1980s and is still heavily influenced by punk bands. Grunge fashion has been seen on runways such as Marc Jacobs and Saint Laurent. It seemed like everyone was wearing oversized sweaters, flannels, and vintage floral for 2014. By Sunset Flores