The Foothill Dragon Press • May 28, 2016 • https://foothilldragonpress.org/246919/news/seniors-revel-in-their-time-at-foothill-14th-annual-seniors-awards-night/ 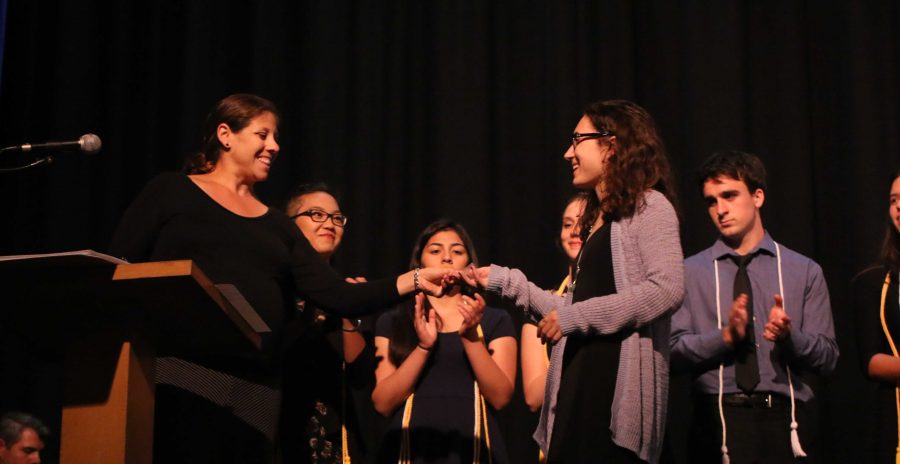 The applause of the crowd was deafening in the Buena auditorium Wednesday night when seniors strode up to receive their cords, awards and scholarships.……………

The applause of the crowd was deafening in the Buena auditorium Wednesday night when seniors strode up to receive their cords, awards and scholarships.

The ceremony was opened with teachers Justin Frazier and Melanie Lindsey wearing sequin vests and bow ties, provoking laughter from the audience throughout the night. The night was themed sequins and bow ties hence the comedic duo’s apparel.

First to be awarded to the seniors were scholarships. Some students got scholarships due to dedication and others for academic excellence.

The scholarships for seniors came from a variety of organizations such as Ventura Unified Educators Association (VUEA), the US Figure Skating Program, and Philanthropic and Educational Organization for Women (PEO international).

Along with the scholarships, seniors were honored with awards and recognition given for involvement in school programs.

Students who participated in the Associated Student Body (ASB), National Honors Society (NHS), Speech and Debate (NFL), California Scholarship Federation (CSF), Fire Crew, BioScience or Journalism were recognized for their service to the group and were given cords and certificates accordingly.

After recognition was given to the school groups’ members, BioScience gave out four special awards honoring top students.

Andrew Jespersen was given the BioTechnology Award, Casey O’Neill was given the Leadership Award and Lauren Dalmatoff and Evelyn Selby both won the Medical Technology for Microbiology award.

Then, Spanish teacher Adrian Sanchez announced the Multilingual Seal awards in Spanish to make a point.

“If you do not understand me, you are obviously not the one getting a seal,” Sanchez said jokingly in Spanish.

The Spanish Multilingual Seal is awarded only to students who take four years of Spanish and pass all the classes. Over 75 students were given this honor.

Linda Kapala then announced the awards for community service. Community service is a graduation requirement at Foothill, in total students need 75 hours. Yet awards are given for students who can go beyond the requirements and are divided into three categories.

Finally, Platinum Award is for students who get 225 hours or more during high school and, together, have over 9,675 hours serving the community.

Although the school gives out three levels of awards for community service, three seniors, Asia Moore, Casey O’Neill and Bryn Treloar-Ballard, additionally got the president’s volunteer service award. This award is part of a separate organization working to help the United States citizens get involved in community service.

The last awards that were accorded to the seniors were the Dragon Hall of Fame Awards. These awards are given to a student, who is chosen by the teachers, and who have excelled academically from their years at Foothill in one particular subject.

The subject-specific awards lead up to the Best All Around Male and Female. The awards were given to Andrew Jespersen and Fidelity Ballmer.

Not only do these students exceed at academics but additionally they are involved in clubs, community service, sports and many extracurriculars.

“It’s about the classroom, so always be attentive, be asking those questions, be understanding. It’s not just about the grade, it’s about the love of learning,” Jespersen said.

Additionally, he said, “it’s also about outside the classroom, so all those extracurriculars, like I participated in sports and I am also in band and clubs. It’s about everything, you’re supposed to be well rounded.”

Ballmer’s advice for students would be to “focus on things you’re passionate about. Find an organization or group that really drives you and something that you want to spend four years working towards.”

With this event seniors now have all their cords, ready to tackle graduation.