The Foothill Dragon Press • May 26, 2016 • https://foothilldragonpress.org/246909/news/bernie-sanders-makes-once-in-a-lifetime-ventura-appearance/

Bernie Sanders makes “once in a lifetime” Ventura appearance

Only two days ago, it was announced that one of the top three presidential candidates, Vermont Senator Bernie Sanders, would be visiting Ventura. Today, enthusiastic Foothill students joined members of the community in the historic campaign rally, just across the street at Ventura College.

Only two days ago, it was announced that one of the top three presidential candidates, Vermont Senator Bernie Sanders, would be visiting Ventura on his California tour. Today, enthusiastic Foothill students joined members of the community in the historic campaign rally, just across the street at Ventura College.

“I feel increasingly confident that here in California we will win, and win big, on June 7,” Sanders cried as he stood against the backdrop of a California state flag, cheered on by almost 10,000 supporters.

“I believe that we will be marching out of that [Democratic] Convention as the Democratic nominee,” Sanders said. “And if I am the nominee, Donald Trump is toast.”

Sanders began his speech by accepting Donald Trump’s invitation for a debate and directly criticizing the Republican frontrunner’s speech towards minorities.

“Mostly we’re going to be asking him why he thinks that, in a nation in which our diversity is our strength, why he thinks it is appropriate to be insulting Mexicans and Latinos,” as well as Muslims, women, and “veterans like John McCain,” Sanders said.

“And maybe he can tell us why he was one of the leaders of the so-called birther movement designed to delegitimize the presidency of the first African-American president we have ever had,” Sanders said.

His fiery speech kick-started the rally and energized the masses. The crowd fed off of Sanders’ enthusiasm, cheering and even chanting “Bernie, Bernie!” when he struck a point.

Sanders addressed topics such as high incarceration rates, raising the minimum wage, student debt, pay equality for women, the decriminalization of marijuana and countless others. Each time he brought in a new point, the crowd of people cheered.

Much of what he spoke about was directed towards the youth, statistically some of his strongest supporters. The stop in Ventura was part of his “A Future to Believe In” tour. Officially, exactly 9,856 people attended the rally, according to Jimmy Walker of Ventura College Athletics.

The sun beat down on the Ventura College West Field, causing several people near the center of the crowd to faint. Cries of “Feel the Bern” turned into “Feel the sun-Bern.” Although it may not have been the most comfortable experience, for many it was worth it.

Most people began lining up early in the morning around 7 a.m., although some arrived as early as 2:30 a.m., and security check in commenced at 9:15 a.m. While people claimed their spots and waited for Sanders to speak, songs like “Disco Inferno” and “Uprising” played to set the mood.

Can’t get enough? Click here to find more video coverage of the event.

Sanders was preceded by Yesenia Mata, regional field officer for Congressional District 16 and part of the National Latino Outreach Team.

She spoke about her experience having to drop out of law school because of student debt. She urged supporters to walk, knock on doors and phone bank for Sanders’ campaign at an event later in the day. “Let’s tell everyone that Ventura is not for sale,” she said. 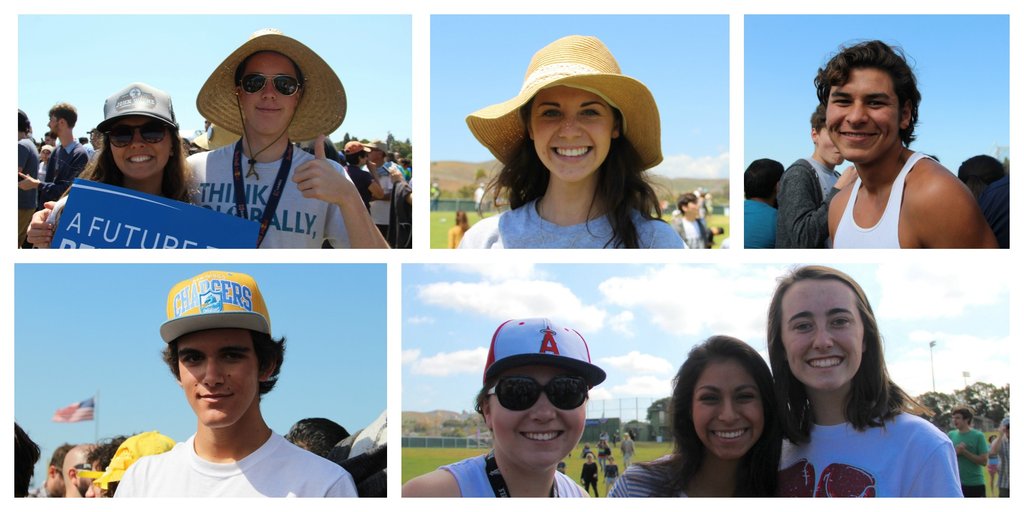 After Mata, but also before Sanders, Maricela Morales rallied supporters also also asked them to volunteer for the campaign. “We need to make noise so that it can be heard all the way at the Ronald Reagan Library in Simi Valley,” Morales said, to which the crowd cheered.

Having known she was gay from the age of seven and experiencing discrimination her whole life, Bernie’s ideas and policies seemed almost too good to be true. “He almost seems like a unicorn,” she said.

However, as she became involved with his campaign, she gained confidence in his ability to win. “Here is the thing about underdogs: they always make it,” Mazarrato said.

Erica Hallahan, a Ventura Unified School District teacher, pulled her daughter Sophie out of school and hired a substitute teacher so they could both attend the rally. “I think is a once in a lifetime cultural, social, political event,” she said. “I mean, you can read about it in the history books, we literally teach civic action, but why not be a part of it?”

“If I could have brought my whole class,” she added, “I would have.”

Not all who attended were supportive of Sanders. Several, including a few Foothill students, attended the rally in support of Trump, holding signs and chanting outside.

Many Foothill students decided to attend despite having to miss school for it. The Foothill attendance office reported 305 unexcused absences today, up from the average of five.

Talaugon thought that attending the rally was worth skipping school, especially given that “a lot of teachers talked about how they’ve had their own experiences with skipping school for seeing presidential candidates speak in different places.”

For sophomores Anson Tan and Eden Hoover, skipping school didn’t affect their decision of whether or not to go because it is “a learning experience.”

Is it ok to skip school for events like this? Click here to read CJ Haberbush’s opinion on why it is.

The rally altered some students’ views on the senator. “It changed my view of how I saw Bernie because before, I didn’t really know about him as much as I do now because he really gave what his ideals were,” Tan said.

“I just kinda knew him as the underdog candidate, like under Hillary and now I think he actually can do it,” Hoover said. “I think he can win over California.”