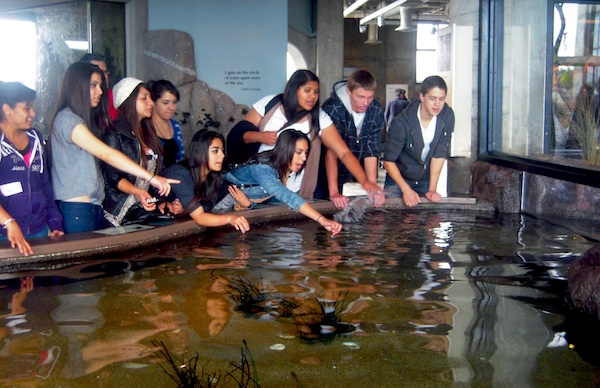 On a rainy day, 321 miles from home, the junior and senior AVID class found themselves stranded due to challenging weather conditions. Despite a few setbacks on their trip from March 25-26, the AVID students kept their spirits up.

The overnight field trip was composed of a visit to San Jose State University, Santa Clara, and a drive-by tour of CSU Monterey Bay. The  conclusion of the excursion was a trip to the Monterey Bay Aquarium, by far the most anticipated leg of the journey amongst the students.

On the first day of the trip, the AVID students boarded a charter bus at 5:50 a.m. and in between yawns on the drive up, the students were able to appreciate the views of San Luis Obispo and Pismo Beach as the sun rose. Six hours and two stops later, the students arrived on the rainy campus of San Jose State University.

The students were led on a tour by a senior psychology major to showcase the school’s many attributes. The most significant part of the school was the library, which was built around a tree in an Alice in Wonderland theme, meaning it was full of optical illusions and trick bookcases.

The idea of the trip came from Francisco Jimenez’s novel, “Reaching Out,” which is about his inspirational life story of going from life as a field worker to an English professor, at the university which he attended at Santa Clara.

“It was interesting to step on the campus that Jimenez described so vividly in his book,” senior Joseph Corral said as he walked on a self-guided tour of the school grounds.

The first night ended with a family style pizza dinner at a sports bar. Awakening bright and early the next day, the students learned that the bus had broken down and had to wait approximately two hours for a new one to arrive.

On top of the delay in the morning, the bus arrived to a busy highway which was closed due to mudslides and floods caused the day before. However, the students kept their hopes up and while the bus driver played the guitar, everyone sung along to “Cielito Lindo,” to brighten their day. The bus driver caught everyone by surprise when he offered to play guitar in order to pass the time they waited. He strummed familiar tunes to many of the Hispanic students on the trip.

Due to the large size of the bus, police escorted it away from the traffic so that the group could continue its route to UC Santa Cruz. However, time restraints caused the entire day to be rescheduled, and the tour of UCSC was canceled. Instead, the students took a quick bus tour of CSU Monterey Bay.

“I am planning on applying to UC Santa Cruz, and was really bummed when we couldn’t stop to visit it. I really wanted to get a feel of the atmosphere on campus,” said junior Celeste Lopez.

However, the students were given two hours to explore the Monterey Bay Aquarium, where they learned about the diminishing sea life due to pollution and other factors that are causing drastic changes in weather conditions.

Jessica Alcantar said, “It really makes you think about your life. I mean we’re all stressed out about going to college that we sometimes forget there’s other things to care about,” said senior Jessica Alcantar.

Finally, after two days of damp, rainy weather, the AVID class was ready to return home and board the bus.

“It was a lot of fun, but at the end I just wanted to go back home and rest,” said senior Yesenia Rubalcava.

As heads tilted sideways and mouths began to yawn, students entertained themselves by singing along to their iPods or watching Disney movies to pass the time, afraid that if they slept embarrassing photos would be taken of them. At around 10 p.m. last Saturday night, the bus drove up Day Road and the AVID class rejoiced at the sight of Foothill.