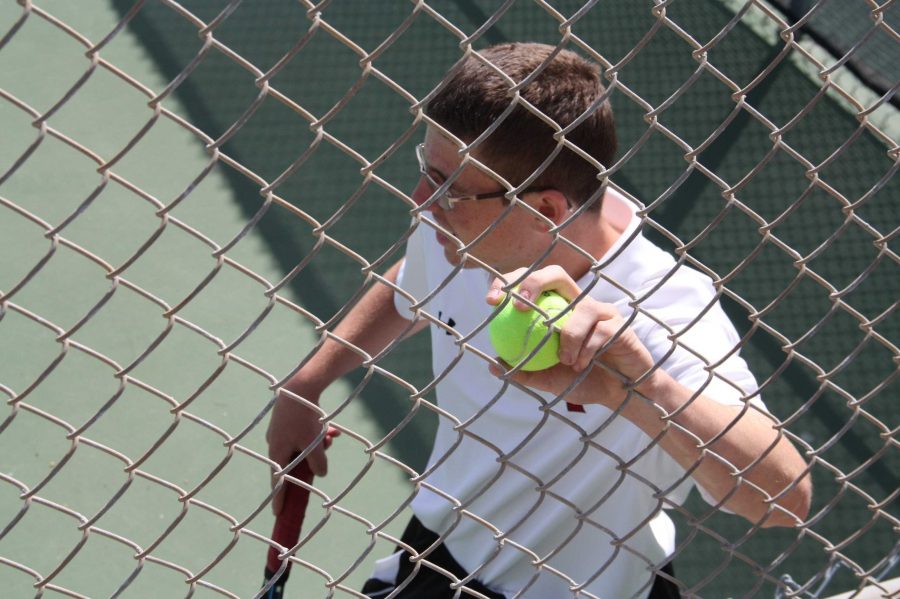 As the afternoon sun beat down on the Ventura College tennis courts on Tuesday, sophomores Jadon Carlson and Martin Gama were fighting for their first set.

An hour and a half later, the doubles pair lost in a tiebreaker.

“For me and my partner, today was a little rough,” Carlson said. “We lost on a tiebreaker in our first match which is kind of disappointing, but that drained all of our energy and we lost the next two matches.”

This loss of energy was witnessed throughout the match as the Dragons lost to Villanova Preparatory School 6-12 in the last home match of the season.

All three singles players, junior CJ Haberbush, sophomore Peter Jesperson, and junior Gabriel Linnehan, each won one set out of three, with scores of 6-1, 6-2, and 6-0, respectively.

Number one doubles team, juniors Dominic DuMont and Noah Colby, ended their undefeated league title with a score of 2-1 and individual set scores of 4-6, 6-3, and 6-1.

DuMont credits the “off day” to lack of practice, but feels that “we overall did well and that’s the best we can do.”

“We did well at the net, just gotta finish with our slams,” DuMont added.

Despite the loss, Coach Brad McClain is “pleased” to see the improvement amongst his players against Villanova as they “played better against them the second time than the first time.”

“Our singles players won the matches they were expecting to win. Villanova has two very good singles players, they’re two of the top three players in the league,” he said. “Even though they lost, they still played stronger points and so they’re obviously learning as they go so I’m pleased about that.”

Sophomore Peter Jespersen sees this growth in experience from the previous season as well.

“Just in general, we’ve gotten more experienced,” Jespersen said. “Last year was our first year ever playing as a team so as we keep playing these same schools from our league, we can get more experience and play better.”

The team lost five seniors this season, a factor that Carlson sees as a reason behind the team’s struggle, but also feels that the team “had a lot of good rookies come out.”

McClain sees this loss of players as an opportunity for the older players to lead by example for the younger ones and “develop their games.”

“As the season has gone, they’re understanding how to compete a little better. They’re still getting beat by better players, which is okay, it is what it is, but it’s nice to see them develop their games,” he said.

Seen more as an individual sport than a team sport, tennis can be dubbed as a lonely game but Jespersen still admires the familial atmosphere that comes with playing on a team.

“Well, [tennis] is pretty individual. In singles, on the court, you’re all by yourself but it really helps to have a teammate come by just to cheer you on and keep you in a more positive state of mind because it can get really easy just to slip into negative when you’re out there by yourself,”  Jespersen said.

DuMont feels similarly and believes the team “support” is what gets the team through their ups and downs.

“This past season we’ve just grown as a family more,” he said. “We’ve been there for each other and just been able to support each other through the wins and losses.”

Before each match, a player reads out an inspirational quote to the team.

This match, a famous saying by Theodore Roosevelt was quoted.

“I believe today’s quote was: ‘If you believe that you’re gonna win, you’re halfway there,’” Carlson recalls.

McClain also puts in a few words before each match, encouraging the players to play their bests.

“Play hard from the first point to the last, keep cool, take your time, hydrate on your changeovers, and remember that you’re not only representing yourself, you’re representing your school,” he said. “Try not to act like a fool out there.”