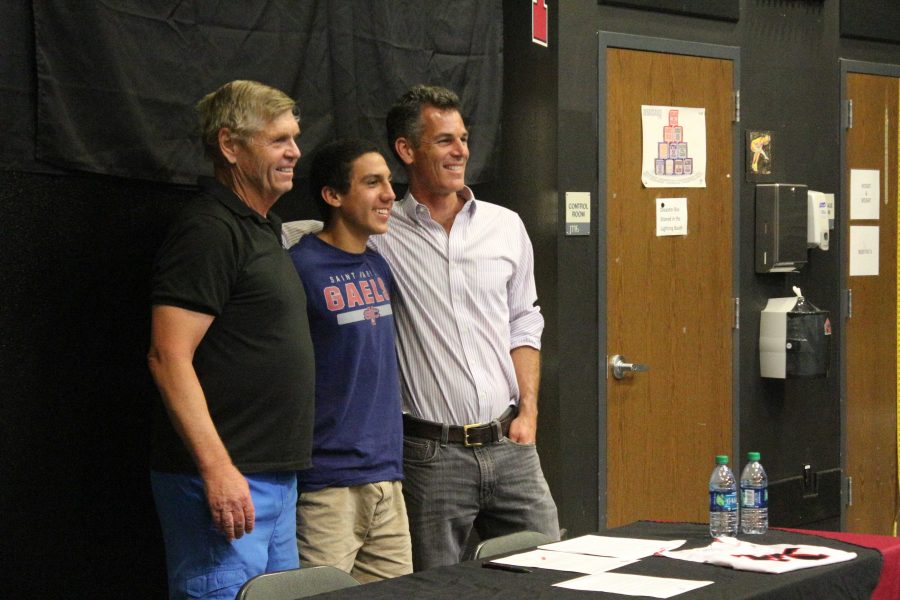 It has been over a year since the Foothill athletics program’s beginning, yet it is already able to congratulate its first student athlete, senior Moses Bojorquez, who received a full-ride athletic scholarship from Saint Mary’s College, which has a Division I athletics program.

While running for Saint Mary’s track and field team, he will be majoring in kinesiology, which is the study of human or non-body movement. He aspires to become a physical therapist, and intends to go to physical therapy school after receiving his degree.

“I chose [Saint Mary’s] because of the team there and the culture they had. When I went on the recruiting visit, it was just like one big family, and I felt that I fit right in with them,” said Bojorquez. “Just like Foothill, they’re trying to build [an athletic] program and I love being a part of Foothill’s program and building it up.”

Coach Ken Reeves, coach of the track and cross-country teams, and Athletics Director Emily Stevens both agree that this will further open up athletic scholarship opportunities to other student athletes at Foothill.

“I think that this opens up the eyes of our athletes to see what is possible through very hard work and perseverance,” Stevens said. ”With the combination of top academic programs at FTHS and excellent athletic programs, students can achieve in both areas and earn scholarship money toward a college education.”

Reeves feels that Bojorquez deserves the scholarship and will do well when he moves up to the collegiate level.

“He works hard, he’s talented and does great leadership,”said Reeves. “I think he’s going to be more competitive at the college level than the high school level. Hard work occasionally gets rewarded and he’s worked real hard.”

Stevens agrees with Reeves in the fact that Bojorquez is a great runner and deserves the scholarship for all of his hard work not only on the field, but also in the classroom.

“Moses earned the scholarship through rigorous training and top performances in cross country meets,” she said. “[But] he has also excelled in the classroom which allowed him to be eligible for this scholarship.”

Another reason this scholarship is so important is because it’s very difficult to receive any full ride scholarships for track and field because of the competitiveness.

“Full-ride for distance is very unusual for a guy,” said Reeves. “Because of Title IX, there’s more scholarships on the girl’s side than the guy’s side, and they combine track and field and cross-country for scholarships.”

The first step for Bojorquez in achieving this scholarship was switching to compete for Foothill’s athletics program and getting support from his teammates and coaches.

Bojorquez began his high school running career with Buena High School. He never really felt a connection with the athletes or staff there and he feels that moving to Foothill Athletics was probably “one of the best decisions he’s ever made in his life.”

“Foothill is just super supportive and Buena wasn’t so much” in comparison to Foothill, he said. “So here, it’s just like family.”

What Bojorquez enjoys about Saint Mary’s is the campus and the culture of the school. He really appreciates the small class sizes and feels as if he can relate to the similar atmosphere of Foothill.

“Also, [I like] the small school environment where they get one-on-one with teachers,” he said. “I think the biggest class is like 45 students compared to a [University of California] where the classes are like 300 students.”

Bojorquez officially accepted the offer and signed with the school on April 13 at Foothill, surrounded by teammates and family.

He feels that the encouragement from his peers and the rigor of Foothill’s athletics has prepared him for Division I athletics, which he wants to carry over to Saint Mary’s College.

“Your teammates are there to support you, but the things you do to push yourself are all [on] you,” he said.

Bojorquez’ advice for the current cross-country team would be to take every day one step at a time, and not stress about everything at once.

“Just work hard and each day just get a little bit better, and just take one day at a time,” he said. “If you just focus on one thing at a time and break it down, you can do it.”