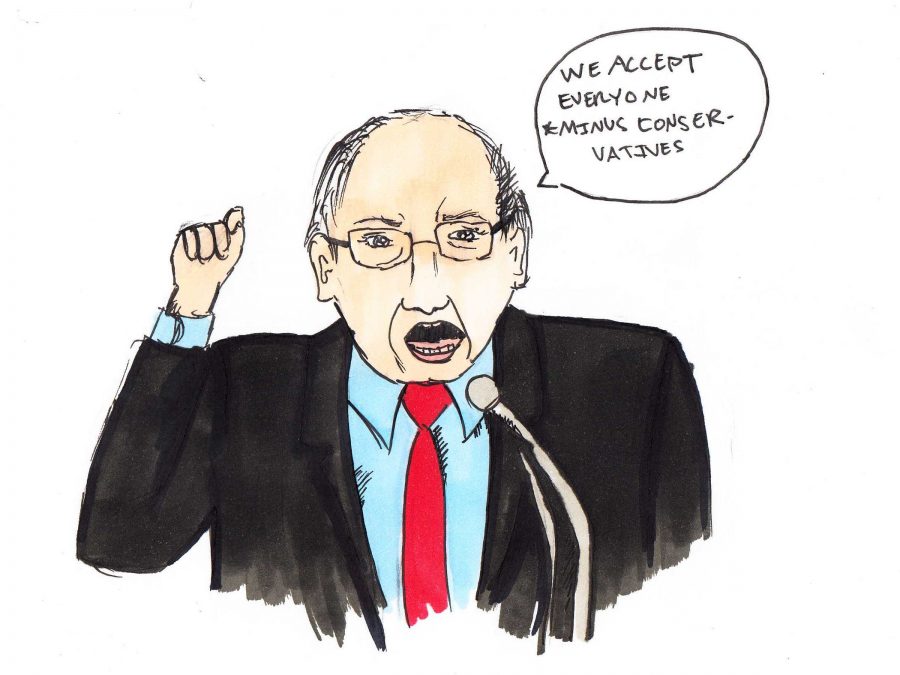 The climate of my high school is intensely liberal, and anti-conservative sentiments are the popular normal. Ironically, liberals as a group claim a “higher moral ground” by being accepting and open, but in truth are more discriminatory than they appear.

Liberals that choose not to accept the right of conservatives to hold their viewpoints are incredibly hypocritical. How can the group that wishes to expand acceptance of all people expect to be taken remotely seriously when they refuse to accept the opinions of conservatives, and even go so far as to shun them?

Many times liberals pick and choose the parts of the constitution and the Bill of Rights that they find useful when championing social issues, while ignoring others. Not that any situation where a person or group of persons is being harmed should be ignored, but the Constitution is the supreme law of the United States and ought to be used when governing and making political decisions.

For example, liberals might tell you that firearms are unnecessary and are causes of catastrophic violence, and in some instances this is indeed true. However, the right to bear arms that is protected under the Second Amendment, cannot, and should not, be discarded.

I’m not advocating for the ignorant use of weapons, and deplore tragedies such as the Sandy Hook shooting, but our attention must be drawn to the fact that many lifestyles rely heavily on hunting and the use of firearms. Simply banning a citizen’s rights completely contradicts the “accepting nature” of the liberal camp. Liberals accept “all” lifestyles except ones that go against their values.

Most infuriating is the anti-Trump vitriol that is slung about. Do not be confused, I am not advocating in the least that Trump ought to be taken seriously, but he has just as much right as any of the other candidates to run for the presidency. Especially against the hypocritical backdrop of Hillary Clinton’s candidacy that is currently under federal investigation.

While each citizen has more than ample right to question the morals (and dare I say sanity?) of Trump and his supporters, it is not only hypocritical but also simply rude and unnecessary to defame him or anyone that happens to support him due to the fact that he holds a belief set contrary to their own. They are doing exactly the same action that they claim to dislike about Trump.

Rather than ceaselessly bashing him, liberals ought to take the moral high road and decide that, while they may not agree with his values or policy, it is not acceptable to stoop to the same level as a man like Trump.

Moreover, the liberal camp is perfectly content with the democratic system of our country until the possibility arises that it won’t work in their favor. When President Obama was elected liberals rejoiced, and should another Democrat president be elected they would do so again.

But since gaining the White House in 2008, liberals fail to grasp that a very large portion of the U.S. population has been incredibly discontent for the last eight years. That is the beauty of democracy. It is assured that no leader is permanent.

Liberals hypocritically exploit the system we have in place by ignoring another almost 50% of our population with asinine and ignorant statements such as threatening to move to Canada. Instead they ought to have faith that when a majority of people again want a left leaning president, then he or she will be elected as has been the precedent.

The liberal camp seems to have no faith in our government and our system of checks and balances. Should Trump be elected in the first place, we cannot expect any rash acts or questionable legislation he signs into law to go uncontested by the Supreme Court.

The election of President Obama was not the end of the conservative world, nor would the election of Trump be the end of the liberal world. Through incredible wisdom our founding fathers devised a system that has worked beautifully, and has insured that power among the federal government has not been abused. It is true our system is not perfect, but it is unequivocally the best system for protecting its citizen’s rights.

Despite both camps being equally hypocritical, at least conservatives are open about their dislike and bigotry. Liberals would rather hide it and have you think that it does not exist at all.

Do not be confused, the fact that conservatives might be worse in some aspects is no argument to refute the fact that liberals are hypocritical and often contradict morals that they claim to uphold.

I implore you to please examine carefully everything that you say and do, and those of the people around you. Do not fall into the trap of dogma and hypocrisy. Those who remain true to their morals, regardless of political affiliation, are far more respectable than those who do not.