Music is being stripped of its value 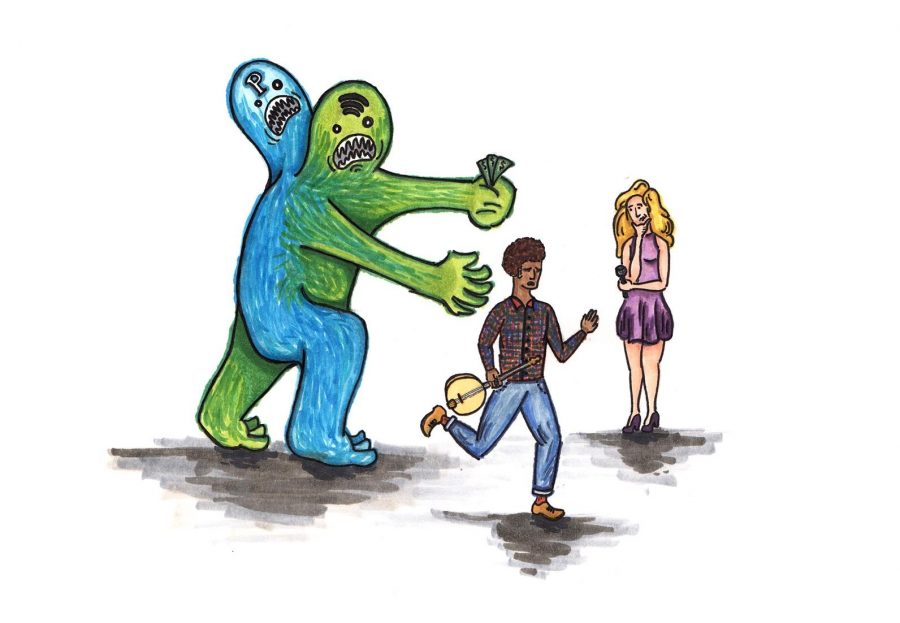 Singer and songwriter Taylor Swift recently took her music off of Spotify, a music streaming platform on which you can listen to music for free. She’s received much undeserved backlash for her decision.

“I think there should be an inherent value placed on art. I didn’t see that happening, perception-wise, when I put my music on Spotify,” Swift said in an interview with Time, regarding her unpopular choice to put a price on her work.

“Everybody’s complaining about how music sales are shrinking, but nobody’s changing the way they’re doing things.”

The reason so many oppose her decision is because it’s clear that she’s successful enough to have already obtained more capital than she could ever need.

But this article isn’t about how capitalistic Taylor Swift is.

It’s about the victims.

The real victims of today’s digital music industry are the smaller, independent bands who are clawing for exposure to the public.

These artists put their songs on music streaming services like Spotify and Pandora for the purpose of getting their music heard, but they receive little to no pay for their art.

Music on the internet tends to get re-downloaded from the same file sharing websites over and over: a practice that’s illegal but highly unregulated. Though many sites find ways to program their media distribution around the laws.

With illegal downloading, artists are receiving zero payment for their work. It seems so easy to just click and have an entire album in your library, but this is ripping the value off of a piece of art.

Musician Damon Krukowski spoke to NPR about the earnings his 80’s band made for their song “Tugboat” through Spotify and Pandora:

“21 cents — the band had earned that. There are three of us who were in that band and wrote that song together, so we had each earned 7 cents for the quarter for those 7,000-plus plays,” he says. “Spotify pays marginally more. Spotify had played Tugboat 5,960 times, almost 6,000. And for that, we as a band earned $1.05. So that was a whole 35 cents a piece. So we tripled our earnings from Pandora.”

The band received less than two dollars for what would have been hundreds of dollars worth of hard copies in the past.

People used to buy a CD, a cassette tape, or a record if they liked an artist enough to want to listen to them on repeat. Now, the music is at their fingertips: portable, cheap, and immediate.

Obviously it’s more efficient for the listener, the one the music was created for in the first place, but this is someone’s job. This is paying someone’s bills. Someone puts work into creating this piece: scrounging for inspiration, puzzling together songs, and finding the support to produce it.

Perhaps Taylor Swift isn’t one of these financially struggling musicians, but her decision to put a price on her music should be supported regardless.

Musicians are artists, and the music they create is art. You wouldn’t walk into an art gallery and take a painting off the wall, would you? The fact that music can be distributed on the internet doesn’t give us the right to strip it of it’s value.

Taylor Swift mentioned that “music is art, and art is important and rare. Important, rare things are valuable. Valuable things should be paid for.”

Music should have a price, and you don’t have to be a fan of “1989” to understand this.