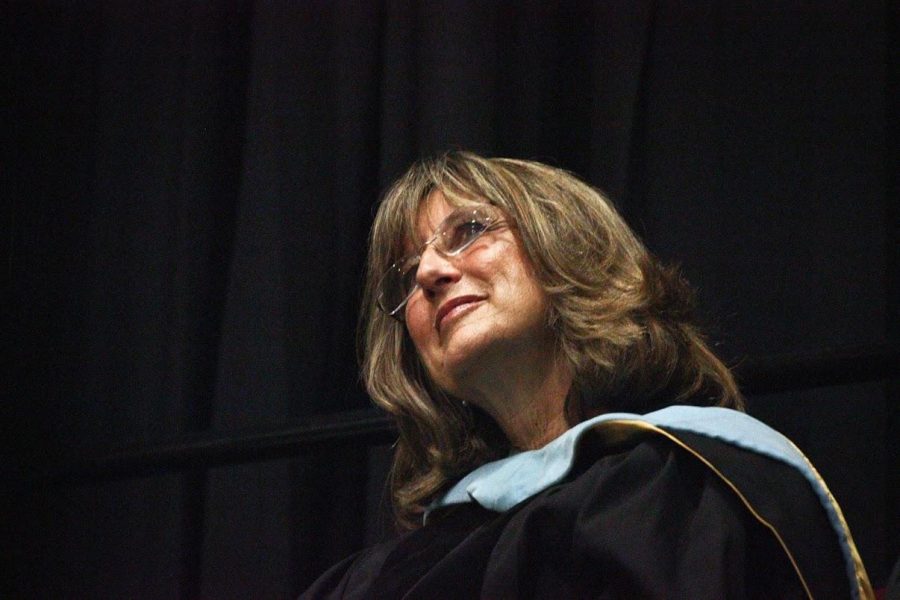 Superintendent Trudy Arriaga will be retiring after 35 years of service in the Ventura Unified School District at the end of the 2014-2015 school year.

Arriaga will be retiring to take on a teaching position at California Lutheran University and begin writing a book. She also wants to spend more time with family.

“I am going to be turning 60, my mother is 92, my grandchild is three, so I was looking for an opportunity to just pull back a little in terms of the intensity and the time that is required of me,” Arriaga said.

Although Arriaga is looking forward to the next chapter in her life, she said she will miss Ventura Unified deeply.

“I will miss Ventura Unified terribly. I will miss the people and the opportunity to serve and regardless of when I left, that could never be minimized,”  Arriaga said.

Next year,  Arriaga will be working as a full time instructor at Cal Lutheran University (CLU).

At CLU, she will be instructing in the Educational Leadership and Masters program, and will also be leading the Ed Leadership Master’s program.

She has also received a contract from Corwin Press Publications, and will be writing a book about leadership and cultural proficiency with author Dr. Randall Lindsey.

“When I put all those together, the stars aligned,” Arriaga said.

Arriaga was born in and raised in Ventura, and attended kindergarten at Will Rogers Elementary in 1960.

After that, her family moved and she attended Loma Vista, then Anacapa, and graduated from Ventura High School in 1973.

She then got married and started working as a paraeducator at Ventura Unified in 1974.

She worked for two years as a paraeducator, then returned to Ventura Unified in 1981 to start her teaching career.

She then taught special education at Mound Elementary School, and then transferred to Balboa Middle School, where she taught general education and the deaf/hard of hearing program.

After that, she became an itinerant teacher specialist and taught at Elmhurst and Loma Vista.

Throughout this time, Arriaga also continued on to higher education. She earned baccalaureate and masters degrees and teaching credentials.  She graduated from the University of Southern California (USC) with a doctorate in 1993.

She then became the Director of Student Support Services, and became Superintendent on July 1, 2001.

“The day that I was selected Superintendent was a day that I will never forget, because I knew that I was given a role that was a privilege. And it was an honor to serve our district,” Arriaga said.

Board of Education member John Walker, who has known Arriaga for around 20 years, said that his favorite memory of Arriaga was when she was selected as the Superintendent.

“I am very involved with other districts that have hired Superintendents. Nobody gets as excited as Trudy Arriaga was that night she was selected. You would have thought she won the lottery.

Arriaga expressed how she felt about the staff in Ventura Unified.

“We have the best staff in the state of California. They’re extremely, extremely dedicated and they are professional and they are caring, and kind, and care deeply about the children in our district,” she said.

“I think she is truly the most exceptional leader and relentless advocate for children that I’ve ever met,” Board member Debbie Golden said.

“She finds great joy in her work, and I think that rubs off on all of us that work with her. She is great at team building […] she just has exceptional intuition,  integrity, and intelligence.”

Board member Velma Lomax explained what she thought was Arriaga’s best quality.

“I think one of the best qualities that [Dr. Arriaga] has is that she always looks at the whole picture, at every angle, and tries to figure out the best resolution so that everyone wins.”

“She’s a very passionate person about children, and she doesn’t just talk the game, she really truly cares about every kid and making them successful,” Bova said.

Arriaga talked about the impact that being Superintendent had in her life.

“I am very, very fortunate to have had this opportunity. It’s a position that is so incredibly important,” Arriaga said.

“It’s also a position that I have been so honored to be able to hold because I represent the outstanding staff and students of our district.”

Arriaga explained that, although being Superintendent is a very honorable job, it also requires a lot of time and effort.

“[Being Superintendent] is a position that requires an incredible amount of time. For example, I had four events this weekend and all of them were five hour events. So, it requires time and energy and ability to be in many places and spend the time that the district deserves,” Arriaga said.

Golden also agreed that being Superintendent took up a lot of time and effort, and expressed how hard Arriaga worked.

“The Superintendency is a huge commitment of time, and [Dr. Arriaga] can usually be found at her desk on Sunday afternoons and late into the night.”

Walker talked about the accomplishments achieved by Arriaga in Ventura Unified.

He said that Arriaga had brought a focus of art and music to the district, which the district never had prior to her time.

She had also brought  a focus on schools of choice and helped new elementary and middle schools have a focus on Science Technology Engineering and Mathematics (STEM), leadership and the arts.

“That’s because we have a wonderful family feeling here that she has fostered over the years. You can leave a legacy, or you can leave a mess. And Dr. Arriaga is leaving a legacy,” said Ventura Unified School Board member Velma Lomax.

Walker also mentioned that Arriaga is very well known for her achievements in dual language and brought the dual language program to the district and really pushed it through.

As a result, elementary students are now learning new languages and continuing learning language in middle and high school, and graduating with a multilingual seal, Walker said.

Walker also said that test scores have increased by 20 to 25 percent since Arriaga became Superintendent.

Arriaga is also good at picking good employees and making them an excellent part of the district, Walker said.

Staff members expressed how they felt, knowing that Arriaga will be leaving the district at the end of the school year.

“The idea that she won’t be in that leadership position is hard. But, I also know that it’s time for her to start a new phase in her life too, and I’m excited for her,” Golden said.

“I’m positive that the stability and the incredibly inclusive positive culture that the Ventura Unified enjoys because of Dr. Arriaga’s leadership will carry on into the future.”

Arriaga expressed her feelings on leaving the district.

“No matter when I left, if I was 90 years old, I would have the same feeling and the feeling is deep, deep sadness, because I’m going to miss the people and deep emotion,” Arriaga said.

“But, at the same time, I’m looking forward to my next chapter in the future.”

Lomax said that she thinks Arriaga is leaving the district stronger than when she came.

“That’s because we have a wonderful family feeling here that she has fostered over the years. You can leave a legacy, or you can leave a mess. And Dr. Arriaga is leaving a legacy.”