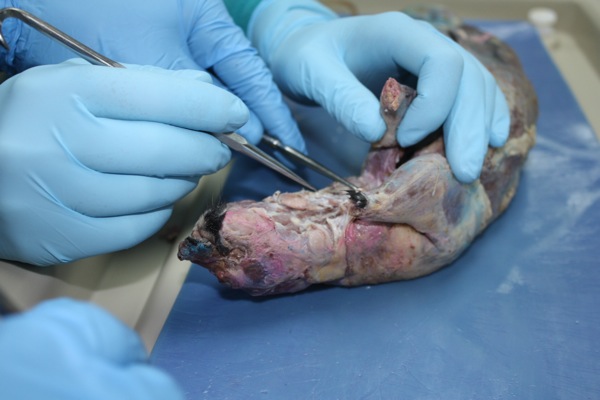 Exclamations of “Gross!” “Cool!” and “Ew!” echoed across the room as students in Butler’s first period class began their endeavor on Jan. 5.

Butler, also an AP Biology and Medical Technology teacher at Foothill, as well as the director of Foothill’s BioScience Academy, flitted from table to table, answering questions, demonstrating technique, and instructing students about where to make incisions.

“I believe in kinesthetic learning,” she said. “There is no better way to appreciate the complicated muscular structures of our bodies than to look at it this closely.”

According to Butler, the purpose of the dissection is to develop hand skills and confidence so that students are trained to perform dissections correctly before they have to do it in college.

Some students, however, were wary about the dissection.

“It’s a struggle for me, because I’ve never dissected anything,” Foothill junior Riki Schmitt said about beginning the dissection. “I felt a little nauseous.”

She does, however, understand the important learning environment that dissection creates.

“I don’t necessarily want to, but I understand the value it has for my education,” she said.

“I think that since it is going towards the advancement of science, it is justifiable,” Egelko said. “I agree with Mrs. Butler that if we kill an animal, we need to use it in a beneficial way.”

Butler acknowledged that students became better at finding muscles as they went on. Her favorite part of the dissection was the final day, when students worked on the minks’ legs. Even though this section of the lab was the most difficult, Butler said that student’s didn’t need as much help as on the other days.

“They discover that they can finally do it on their own,” she said.