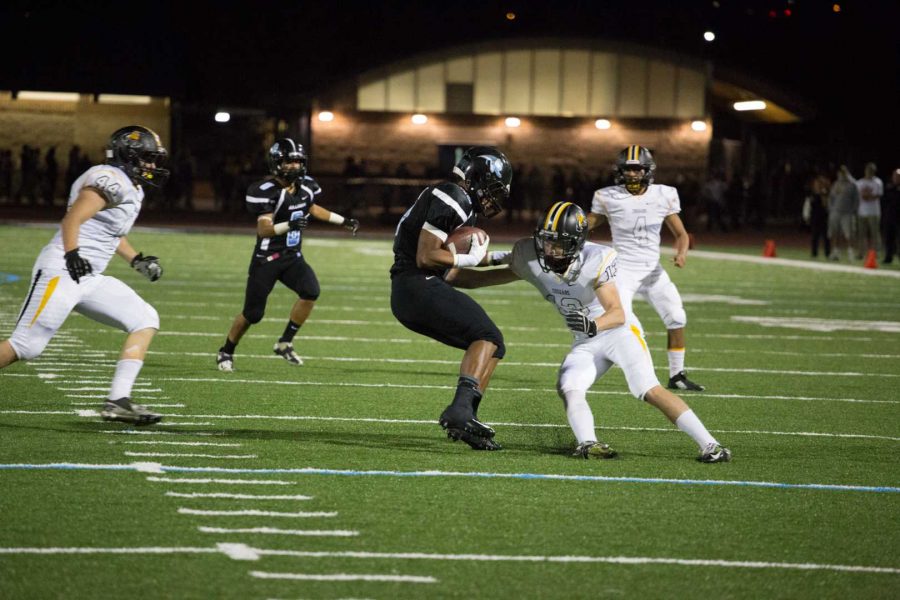 [dropcap size=dropcap]C[/dropcap]hants and colored powder filled the air as the full moon shone down upon the thousands of spectators gathered at Buena High School on Friday night to watch the rivalry football game between Buena and Ventura high schools. The Ventura Cougars defeated the Buena Bulldogs 52-13 at the championship game, continuing their five-year winning streak.

The night began as Buena honored its football, band, and color guard seniors. The game started an hour later with Buena senior Hannah Martin performing the national anthem for the packed stadium.

Buena won the coin toss and chose to kick off first. With eight minutes and 21 seconds left in the 12-minute quarter, Ventura put the first points on the board, with a touchdown from senior Tommy Grossman. However, Buena answered seven minutes later, when senior Connor MacArthur scored a touchdown. At the end of the first quarter, the score was tied, 7-7.

Ventura kicked off the second quarter, but recovered the ball by grabbing it out of a Buena player’s hands as he fell, enabling Ventura to start on Buena’s 24-yard line. With nine minutes and 22 seconds left in the quarter, Ventura scored a touchdown with a run up the right side, breaking the tie, 7-14. Ventura senior Josh Januska then had a 30-yard run with seven minutes, eight seconds left, and a field goal for Ventura left a score of 7-17 with almost five minutes remaining.

Ventura scored a touchdown with two minutes and 25 seconds left in the second quarter after senior Tyler Peralta made a 22-yard run up the middle, changing the score to 7-24 in Ventura’s favor. Buena made an interception at the very end of the half and ran the ball from its own goal line to the Buena 18-yard line.

Buena’s varsity cheer squad performed first during halftime. They were followed by a performance by the Buena marching band, color guard, and drumline.

Ventura kicked off again in the third quarter, but a flag, or foul, on the play forced the kickoff to be redone. Buena fumbled the return, and Ventura recovered the ball on the Buena 7-yard line. Peralta converted the play into a touchdown with 10 minutes and 35 seconds left in the quarter. Another touchdown by Janasuka with a 27-yard run up the right side made the score 7-38 in Ventura’s favor.

With just over three minutes left in the quarter, Buena senior Josh Cookson ran an 11-yard touchdown; however, Buena missed the field goal for the extra point. An 80-yard touchdown run by Ventura senior Chase Gardner ended the third quarter with a score of 13-45, Ventura leading.

In the fourth quarter, the Cougars’ quarterback was sacked, but Ventura answered with a 24-yard run on the next down. In the seventh minute of the quarter, Peralta scored the final touchdown of the game with a run from the Buena 1-yard line, bringing the final score to 13-52. With their win, Ventura received both the Suzanne Brown Memorial Trophy and the league championship title.

For Ventura football coach Tim Garcia, the win is a personal one.

“This is everything. There’s a lot of emotions that go through this game,” said Garcia. “I graduated from Ventura High and so I was a player in this game and I’ve coached a lot of years in this game […] It’s really an emotional week and an emotional game.”

Foothill senior and Ventura player, Jared May, believes the victory is well-earned.

Foothill junior and Buena varsity linebacker Andrew Conchas, though disappointed by the loss, was proud of his teammates’ fighting spirit.

“[The game] means a whole lot. It’s a rivalry game. We lost it, but I’m just really proud of my guys,” said Conchas. “I felt like our squad, we played our hearts out, and just worked to the end, to the last whistle.”

Tim Gutierrez, Buena’s coach, was also let down by the game’s ending.

“Obviously we had a vision of a different outcome, and when you come out to a football game [and] you don’t execute like you were hoping to, it’s very disappointing,” said Gutierrez.

Gutierrez acknowledged that some more “drills and skills” would be needed to help his team fix their mistakes.

“I think we need to just correct our errors. Just almost fundamental mistakes that we made tonight, we need to correct those,” said Gutierrez. “We’ll practice. We’ll watch video and evaluate and make some corrections.”

“It’s heartbreaking, it is,” said Johnson. “[But] we’ll come out next week ready.”

Garcia was inspired by “watching these guys bond” over the course of the season and by experiencing the close relationships the team developed with one another.

“Watching these guys come together and call each other brothers and go through some ups and downs and adversity and how they deal with those types of situations,” said Garcia. “To me, the wins and losses will take care of itself, but it’s this other stuff behind the scenes that people don’t see that really makes coaching worthwhile.”