Sasha Seymour wants to hold on to her Russian heritage 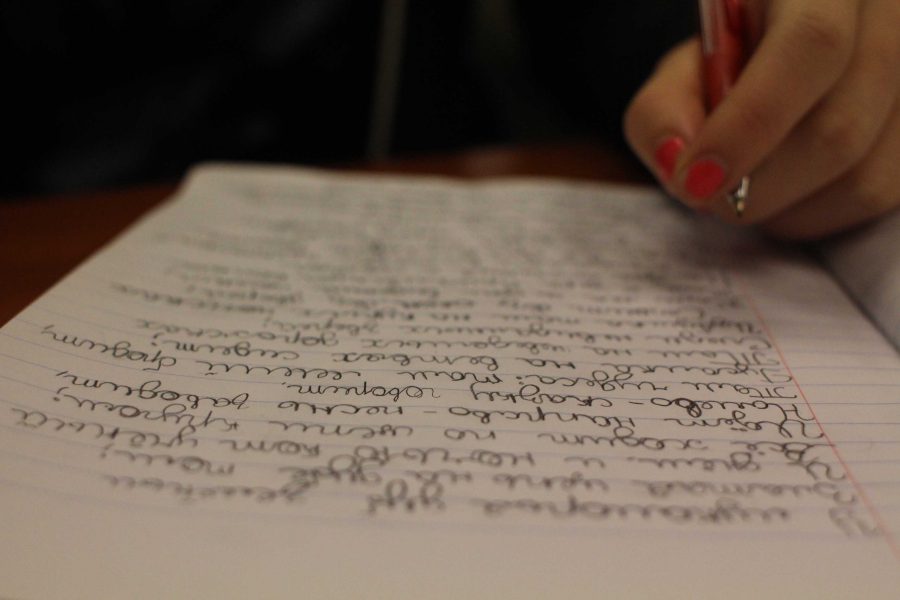 Sophomore Sasha Seymour’s enthusiastic personality and her tendency to bust out dance moves during upbeat Spanish songs constantly brightens the back of the Spanish 3 classroom. What students don’t know aside from her energetic attitude is Seymour is trilingual. She is a fluent speaker of English, Russian, and another dialect in Russia called Ossetian.

Seymour’s ability to speak Russian and Ossetian is credited to her grandmother Zarema Zakharova, who is a native Russian. Her grandmother immigrated to America 17 years ago and worked as a house cleaner. A year later, she saved enough money to fly Seymour’s mother Zarema Seymour to the United States as well. After arriving in America, her mother met and fell in love with Seymour’s father Don Seymour.

“In order for her to stay here, she had to marry because her [visa] was expiring, but she already met my dad before so they were already dating,” said Seymour.

“Language is more than just grammar; it’s understanding people through their language and so, she has many advantages from being trilingual,” said Spanish 3 teacher Steven Perfect.

“I try to speak it as much as I can [so] it stays in our family because it was in our family 10 years ago and we want to keep it in our family. It’s a hard language to learn, but it’s very rewarding because you know more than one language,” she said.

“I think it’s an amazing ability,” said Spanish 3 teacher Steven Perfect. “The cognitive flexibility and the long term benefits of being multilingual […] are long lasting. Everything from the ability to get jobs, interact with different people and get along with people of different cultures. Language is more than just grammar; it’s understanding people through their language and so, she has many advantages from being trilingual.”

Seymour traveled to Russia last year and three years before that. She has relatives living in Russia, so she visits them periodically. Her favorite aspects of Russia are the foods, beautiful buildings and the atmosphere.

“If you go sightseeing, there’s lots of buildings that are really pretty and they’ve got different colored stained glass and it’s really, not exactly church-ish, but really beautiful. […] But the best thing about Russia is experiencing the spirit of the people around you,” she said.

Various Russian dishes can also be found in Seymour’s household such as potato latkes, also known as potato pancakes, and borsch. Borsch is a beet soup that is flavored with different fruits and vegetables.

Potato latkes are fried pancakes made from grated potato, flour and egg and are often seasoned with grated onion or garlic. It’s a dish popular among several European and Middle Eastern countries such as Czech, Germany, and Russia, to name a few.

“Borsch and coleslaw and potato latkes are more everyday foods. During celebrations, that’s when you make pilaf, […] Pilaf is a [dish] where you have lot’s of rice and carrots and pinto beans and also some traditional dressing. It’s really good and sometimes you add chicken or beets in there,” Seymour said.

According to Seymour, popular holidays observed in America are celebrated a bit differently in Russia such as Christmas and Mother’s Day.

Although in both America and Russia, Mother’s Day has the same concept, it is celebrated greater in Russia than it is in America. Typically in America, mothers are given flowers and/or cards. In Russia, mothers are honored more profoundly for the household chores they do.

“Mother day [is] celebrated really greatly because in Russia, the customs are that the mother stays home and cleans and cooks and everything else. The dad goes out to work, so the mothers get more than one day to celebrate and have their own time because 365 days in a year, they’re at home cooking and cleaning,” she said.

In America, Christmas is associated with Santa Claus and the idea that he will bring you presents if you are good. In Russia, it is less centered on Santa Claus and presents and more focused on the religious aspect of it.

“Christmas Eve, day of Christmas and the day after Christmas [is] when they have the biggest celebration. They cook and do presents and sing songs,” Seymour said.

In Russia it snows for over half of the year. Due to freezing temperatures, citizens often times ice skate indoors to pass time, which is why Russians tend to dominates in the Olympics ice skating portion “because that’s mostly all you can do in Russia,” according to Seymour.

As to those interested in learning Russian, Seymour advises students to take their time learning nouns and verbs, so that it’s easier to transition into sentences.

“It’s also good to listen to audio, even though you might not understand it. You’ll still get some of the words. It’s just good to listen because they speak really fast,” she said.

Seymour is currently learning Spanish and aims to pass her Spanish AP test in May of her junior year. After she finishes her Spanish studies, Seymour plans on learning another language, either French or Chinese.