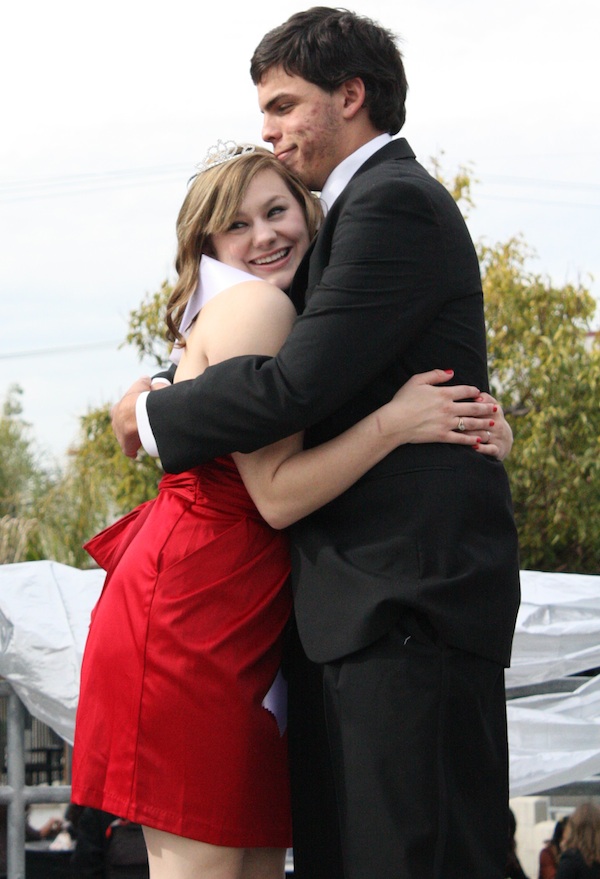 With Winter Formal only a week away, ASB put on the annual Winter Formal Expo today. Crowds of students gathered around the stage area during lunch to watch the classmates they had nominated as princess, prince, queen and king strut in their dresses and tuxedos.

The show began with the court playing Telephone as David White tried to pass messages to Alexandra Zinik, which lost their meaning when they finally reached her.

The Winter Court then appeared on stage in couples based on their year in school. Finally, the coronation of the princesses began and each girl received a sash and crown to signify their title.

The school erupted in applause as the princes were called and the couples headed off together for a walk down the quad as the event came to an end.

Of course the event received both positive and negative comments once it was over. Since it was the most recent event at school, everyone was talking about it.

Many girls commented on the dresses they saw, which gave them ideas for possible dresses they would like to wear to Winter Formal. Senior Lizet Ruvalcaba said, “I liked Karmen’s dress it was very pretty. It turned colors in the light!”

Freshman were also very excited to see one of Foothill’s traditions for the first time, unsure of what was going on exactly. Paulo Aguilar, freshman said, “That was so cool; it inspired me to try to get nominated next year.”

However, many students were actually unhappy with the expo this year and felt as if ASB had not put much consideration into it.

Junior, Sandra Teran said, “Winter formal court and the whole presentation was disorganized, and it seemed like they didn’t know what to do. Last year’s was more creative and it was more alive, people had more spirit and were much more into it.”

Many students also didn’t like that there was lack of music and they noticed that few decorations had been set up this year. Though the goal of the expo is to get students excited for the dance, some weren’t convinced that they would like the event.

“It wasn’t that interesting. It didn’t make me want to go to Winter Formal,” junior Jessica Ruiz said.

The dance will be held at EPIC Ventura on Dec. 11 and tickets can be purchased from the student store at $45 per couple and $25 for a single ticket. Dance contracts can be found here.