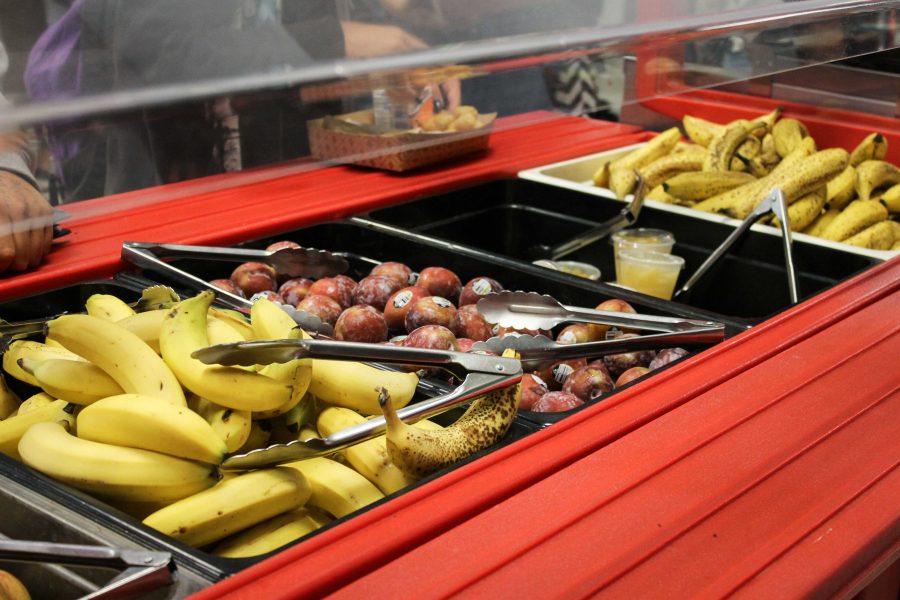 [dropcap size=dropcap]T[/dropcap]his summer, new federal regulations for food in school were enacted nationwide. The regulations apply to cafeteria food and vending machine snacks sold at school. They also affect items given away at schools, such as Gatorade products during “G-Week.”

These changes were due to the new Smart Snacks in Schools Rule, which outlines the required nutritional content for various types of food sold in schools.

This new set of federal guidelines was enacted on July 1 of this year in all United States school districts. Created by the United States Department of Agriculture (USDA), the guidelines aim to promote healthy eating in public schools.

The standards specified requirements for snacks (such as chips, nuts, or granola bars), beverages, sides (items served with an entree, such as mashed potatoes, french fries, or steamed vegetables), and entrees.

Foothill applied for and was selected for what is known as “G-Week,” which occurred the second week of school.

As part of G-Week, Gatorade gave Foothill different types of sports coolers for drinks, along with samples of their products to distribute to student athletes. These products were energy chews, whey protein bars, and protein shakes. Some students voluntarily chose to sample the products.

Of the three items Gatorade distributed to students, none pass the new federal guidelines, according to the information from the Smart Snacks calculator.

“[The nutritional content] is something we were a little bit concerned about,” Foothill principal Joe Bova said.

According to the USDA, foods that do not comply with the standards may be sold from one half hour after school through midnight.

The Gatorade products were distributed to student athletes before and after their workouts for a few days between 2 pm and 3 pm, which is counted as part of the school day.

“It’s just instinct, I always look at the ingredients of things, and like I said, the first two ingredients were like corn syrup and then sugar and I was like, ‘Please tell me, is this healthy energy? Is this the energy I should be consuming before I work out?’” Schuyler said. “The rest of the ingredients were just things I couldn’t pronounce.”

Schuyler said she, as well as some of her friends, had “body problems” after eating the products, but wasn’t sure if the products were the cause.

“I had like an asthma attack. I don’t know if this was induced by the food, but I had eaten the food before I worked out. […] I couldn’t breathe, and every time I breathed it wasn’t enough breath,” she said. “It might be a coincidence that it all happened on the day we ate this food they gave us, but it could not be.”

Junior Cody Clark tried the energy chews and “got a sugar rush” from them, then had a bad headache after practice.

“The guy at the Gatorade rally tried to justify it and say that it’s all coming from carbohydrates, but if you look into it, it’s all just sugar,” he said.

“It’s nice that they’re sponsoring us and giving us money for our equipment, but it kinda sucks at the same time because you’re promoting a product that’s unhealthy,” Clark said.

Sophomore John Marcoux said he felt ill after several cross country practices the second week of school. He attributes this to the Gatorade products.

Several students did not have strong opinions about the products. Junior Alex Beamer, who is on the baseball team, expressed that he wasn’t sure about his stance.

“I don’t exactly hate it, but it’s not great either. They kind of didn’t tell us what was in it,” Beamer said.

Freshmen Olivia Burton enjoyed the product and said it helped her run during cross country practice.

“It [the product] does help us pretty much run. I think it gives us energy to run quick and not be tired and stressed out,” Burton said.

“Buena and Ventura both do a partnering with Gatorade, and they do a similar kickoff to what we did,” Bova said.

He said he thought they might have Gatorade specific vending machines on campus.

Kara Muniz, Director of Health and Nutrition Services at Ventura Unified School District, was not aware of “G-Week” happening at Foothill. She said that she doesn’t think the goal of the new federal standards is to punish companies distributing non-compliant foods, such as Gatorade, but is considering speaking to them about the new Smart Snacks Rule.

“I don’t think the goal of this, like I said before, is to punish people; it’s to educate them,” Muniz said. “So maybe I need to find out who arranges that, and maybe Gatorade needs to realize that we have these mandates.”

Foothill’s Gatorade representative did not respond to several calls from the Foothill Dragon Press.

Items in the vending machines have been changed because of the new standards for snacks sold to high schoolers.

A few items have been changed in the vending machines in order to meets the standards.  Muniz said she personally used the calculator to check each item being sold to be sure it complied.

“Ultimately, whoever at the school level is in charge of those vending machines, they’re the ones that truly need to make sure everything is compliant,” Mike Danzik, nutrition education consultant at the California Department of Education, said.

One of the main issues that have been brought up is the size of items.  In order to comply, there needed to be less sodium and fat, and fewer calories in the items. A simple way to fix this was to cut down the size.

“All the chips, the Corn Nuts, the Chex Mix, that stuff, has gotten smaller, but the cost hasn’t decreased,” Muniz said.  “If there’s a real demand for it, maybe I can lower the cost a little bit.”

The snacks being used will likely be reevaluated in October.

Muniz oversaw implementation of these standards in the district, giving presentations to school principals, office managers, and the Parent Advisory Council (PAC). She says Ventura Unified is ahead of other districts in terms of applying the standards.

Muniz said she thinks the standards are changing things for the better.

“As the Department of Education, I think we feel that [nutrition] is extremely important, probably as much as academic success.  There’s a lot of research that shows a link between health and academic success, and of course we’re for both of those,” Danzik said.

The Smart Snacks in Schools regulations have changed things in the cafeteria as well.

Lori Walker, cafeteria manager at Foothill, said that even though new snacks are smaller, there is more variety.

“The new guidelines kinda opened the window for us to have more choices.  Since we had to re-analyze all of them, we then saw what was all available,” Walker said.

Some of these new foods include chicken alfredo, frozen slushies, and “cinnamon toasties.”

Prices have not had to change for breakfast and lunch, Muniz said, which benefits students on Free and Reduced Meals.

The Free and Reduced Meals program is aimed to help students in difficult financial situations get healthy meals from school. The state and federal government subsidize these meals, so the cost for the district is offset.  However, the district receives “very little reimbursement” from the state for the paying population, Muniz said.

Even with the subsidies, it’s hard for cafeteria staff to craft meals that fit the price range.

“Its tough in this district because we’re close to 50 percent free and reduced,” Muniz said.

Fidelity Ballmer contributed to the reporting of this article