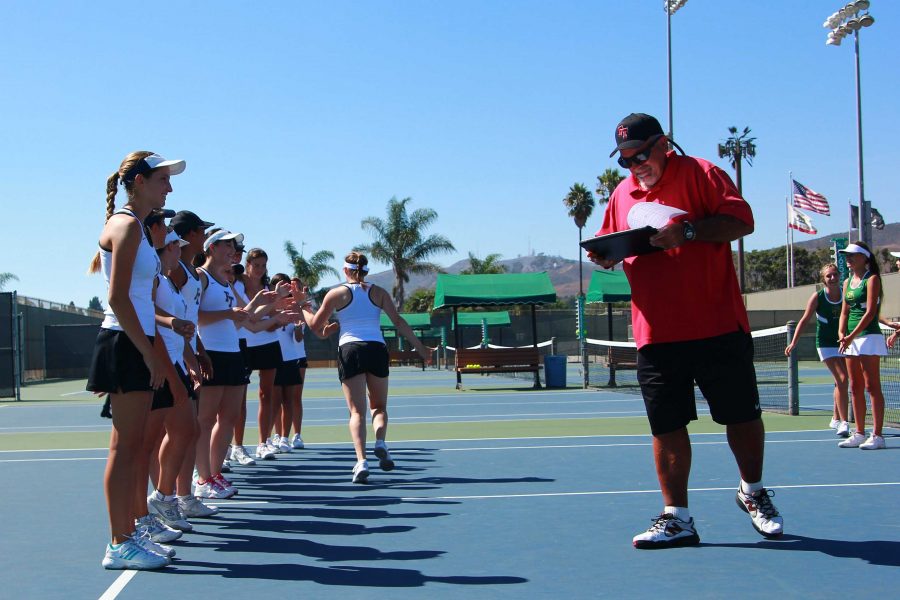 Foothill tennis coach Brad McClain’s nearly 40 years of tennis experience began when his father handed him a racquet when he was just 12 years old. Since then, McClain has played for Ventura High School, Ventura College, and Westmont College.

In high school, McClain played both singles and doubles tennis, but found success in playing singles when he won the Western State Championship in 1982 at Ventura College.

McClain wishes the same success for his team, the first glimmers of which shone through during the the girls’ tennis teamls first tournament, where the team brought Foothill its first athletics victory.

“My goal would be for the girls to try to get into the playoffs,” said McClain.

Sophomore Summer Khouvilay finds McClain to be an effective coach in helping bring her teammates up to that level.

“[McClain] is really concerned about his players, and wants to make sure that we’ll have a great overall team,” said Khouvilay. “He’s a very quiet coach, but he gets things done.”

McClain cultivated his quiet demeanor through his total 22 years of coaching experience at the Pierpont Racquet Club, Ventura High School, and Ventura College.

“When I first started coaching, I was always correcting, always being critical, always trying to get people to improve,” said McClain, “but you have to learn to say a few compliments.”

In the end, however, McClain wants to offer his players only the support they need to succeed and enjoy their time on the tennis team, explaining that he sometimes can be “more bark than bite.”

McClain is looking forward to the “challenge” of building a sports team, rather than simply inheriting an already-established program. He acknowledges that the tennis teams could have their ups and downs, but takes heart in the support and enthusiasm Foothill players show for their sport and for one another.

“We are a team. They support each other very well, regardless of how they play,” said McClain.

McClain is undaunted by the differing levels of skill on the tennis team, and is focused on helping the players improve their game while creating a low-pressure environment. For McClain, it is important that students enjoy their time on the team, though he admits that “[his] blood is as red as anybody else’s.”

“Not all will improve at the same speed. Some will grasp onto something better than the others, and we just have to piece it together,” said McClain.

In all, McClain strives to be “fair and realistic” with his players.

Freshman Serafina McClain appreciates the balance that Brad McClain is able to find when helping athletes.

“I really enjoy working with him as a coach. He’s really supportive of us and gives us one-on-one interaction,” said Serafina McClain.

For the Foothill tennis team, Brad McClain is looking for students willing to put effort into their game and work hard at every practice. He recommends that interested students without tennis experience take some lessons to give them the basic skills they need to succeed on a high school team.

McClain is looking forward to the seasons of tennis to come.

“It’s just starting to unfold for us,” said Brad McClain. “I’m hoping that the most exciting and interesting stuff is yet to come.”