The Foothill Dragon Press • May 31, 2014 • https://foothilldragonpress.org/18723/news/megan-kearney-leads-vhs-track-to-new-heights/ 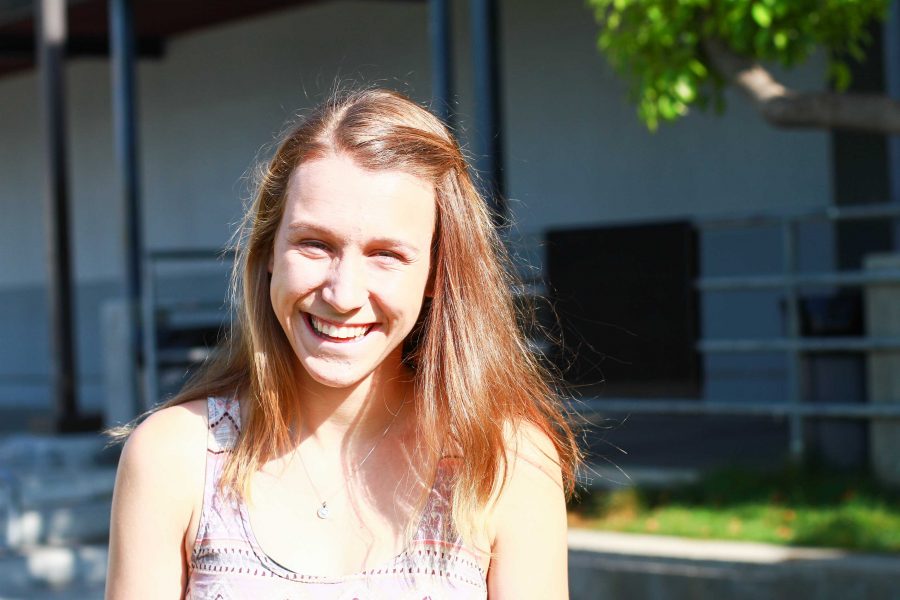 “Track is not an individual sport, as much as people think that it is. It’s really about the team,” Kearney said. “Without the team, there is no track.”

Both Kearney and her team have achieved at the highest levels of track and field. Kearney currently holds a total of six records among the VHS track team: three “frosh-soph” records and three varsity. She was also awarded the  Jack Kelley Perseverance Award, and was named “Sprinter of the Year” at VHS.

However, Kearney felt most grateful to be honored with the Jack Kelly Perseverance Award. The award is given at the VHS track banquet by the coaches in order to honor the student who most exemplifies perseverance throughout the season. It is the highest honor given on the VHS track team.

“It was surprising to me, but exciting, and made everyone in the audience cry when I got that, and myself. It was an exciting moment. I just didn’t expect it,” Kearney said. “I am very thankful for the award.”

Kearney’s teammate, freshman Danielle Askar, feels the award honors Kearney’s dedication and sees her as “a beautiful recipient for the Perseverance award.”

“I know Megan’s senior school year has not been a walk in the park but even if it got her down at times, I never saw Megan give in to a bad outcome. As unhappy as it may have made her, she always managed to fulfill aspects of her life in which needed her,” Askar said. “In my opinion, a place that Megan has touched is a better place because of it.”

Kearney has risen above many challenges this season, greatly impressing one of her coaches, Ken Reeves.

“She [Megan] didn’t make it into the finals [of CIF], but she won the Channel League in the 400 meters,” Reeves said. “Then as a group [her relay team] decided they had a better chance of making it to the CIF finals or breaking the school record in the 4×4, so she gave up her individual event to run in the 4×4; contributing for the team rather than going for the personal glory, kind of a cool concept.”

Kearney attributes her decision to the close bonds connecting her team.

Askar says Kearney has been an inspiration to her this past season.

“Megan inspires me everyday to push my limits, and to work harder, especially at practice,” Askar said. “Not only does she excel as an athlete, but also as a student. Megan is a perfect example of someone who maintains a healthy balance in all aspects in her life, and succeeds in all of them.”

Ventura High School cross country coach, Preston Biller, notes how much Kearney’s confidence has grown as a runner over the past four years.

“When she was a freshman she was a tiny thing, light as a feather, and could run forever, but she wasn’t always sure how fast she was,” Biller said in an email with the Foothill Dragon Press.  “As she got older, she took more risks [and] found out that she not only could run forever, but she had great leg speed and could out kick anyone if came down to a big finish.”

Kearney began her running career in 7th grade with the Ventura Tigres, “kind of just for fun, to be social.” She then joined the cross country team her freshman year. With this season’s end, she has been running for six years.

This love for running combined with her experience proved to make her an exceptional varsity captain this past season.

“Megan has done a very good job regarding our team this past season . She was always able to get me excited for a race along with my fellow teammates, and was always there when I didn’t want to be bothered with a crappy outcome of a race,” Askar said. “But no matter what, Megan genuinely loves her team, and it always shows through her enthusiasm and generosity.”

Biller also notes Kearney’s initiative in leading practices and compassion for her teammates.

“Megan has been a leader since day one.  Things as simple as setting up practices when I didn’t have official practice, to running a great race when the team needed to perform,” Biller said.  “She motivates her teammates and they look to her for advice.”

What Kearney will miss the most is the “second family” she found in her track team.

“When you walk into the gates at track, everyone’s just smiling. Everyone’s laughing. Everyone’s cracking jokes from ‘Nacho Libre,’” Kearney said. “I think that I’m going to miss Ventura’s family because they’re irreplaceable.”

In addition to the support of her teammates, Kearney is grateful for the encouragement of her coaches Reeves, Biller, Kory Anderson, and Tyree Cruz.

She also expressed her deep gratitude for her parents, who supported her at “every track meet, every single cross country meet over the past four years.” Kearney credits them with making her “want to achieve the things that I have. They’re the ones who got me to believe.”

The support of her teammates, parents, and coaches were crucial for Kearney over the past four years. She was injured her junior year, and the encouragement of her team and parents helped her overcome personal challenges both this season and in previous years.

“I think the biggest challenge […] was being mentally strong through whatever happened. Coach Anderson always says to leave your baggage at the gate, and that was something that I really had to learn to do,” Kearney said. “It’s not all about physical strength and talent. You have to be able to tell yourself what you can do versus what you cannot do.”

Kearney plans to continue running in college and beyond, as it is “a huge part of [her] life.”

When she leaves for college, Kearney will miss “the people and the support” on the Ventura track team.

“It’s an incredible thing to just go out there and stand there and just watch everyone be supportive of everyone […] It’s made a huge impact on my life,” said Kearney. “[My teammates have] grown so much as runners and as people, and that makes me excited, especially as a captain, just knowing that the little things I’ve done have helped someone else.”

Kearney’s teammates will greatly miss her as well, along with the memories they made together.

“I will miss everything about Megan,” Askar said. “Whether it’s us jamming to ‘Happy’ by Pharrell Williams, or her pre-meet inspiration talks, Megan never ceases to amaze.”