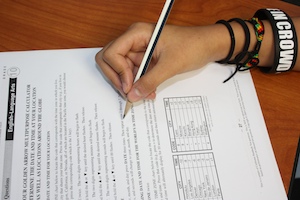 Katie Elvin
It’s that time. The familiar scratch of pencils, the yearly darkening of infinitesimal bubbles, the annual mind-numbing monotony of answering seemingly never-ending questions, the standardized testing that we have grown up with, is finally going to change.By the 2013-2014 school year, English and math standardized tests will be taken on a computer.

These new tests offer ways to individually challenge every person taking them by making questions progressively harder based on the test taker’s success. However, if a student is having trouble answering the questions correctly, then they will become easier accordingly. In addition, a more creative question might prompt the test taker to write a short research paper using attached websites, but the majority of the questions will still be multiple choice.

Current paper standardized tests costs billions of dollars to produce and a common complaint about them is how teachers must structure their lesson plans to satisfy the standards of these tests. A $330 million federal award to 44 states, including California, is looking to change this. These tests will be aligned with national standards, and states will no longer have to develop their own tests, saving them billions.

Teachers still believe that these tests are more of a weapon than a learning tool, since teachers are now evaluated on how well their students do. Computerized versions of the normal standardized tests may change the results, and how the results are seen, but they will still be used to evaluate the teacher.

There are those, however, like Mat Taylor of United Teachers Los Angeles, who believe that teacher evaluations are just a distraction from the real issues. He argues that the real problems go beyond testing, like insufficient funding to schools across the nation and the absence of much-needed teacher input at schools.