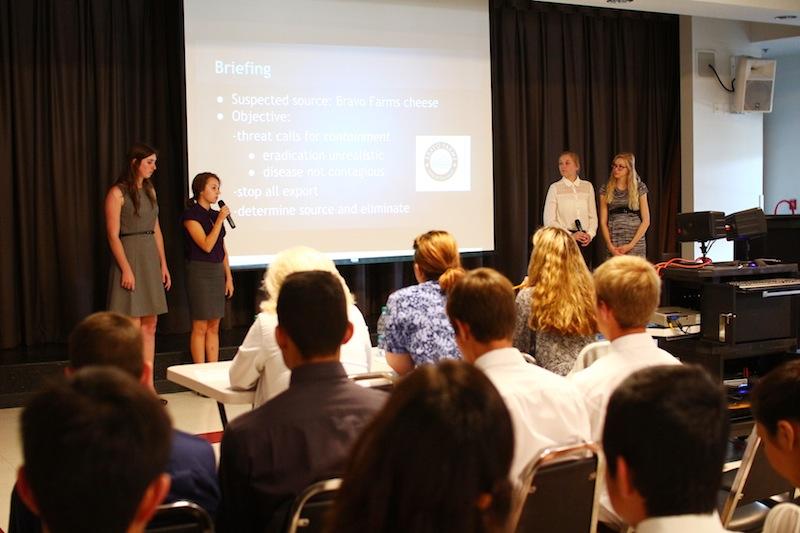 It’s not often that high schoolers strategize to combat lethal and infectious diseases from all over the country, but Foothill’s MedTech students did when they presented their Disease Projects on Tuesday and Thursday in Spirito Hall.

The project, which has been going on for 7 years within Bioscience, assigns groups of juniors an infectious disease. They must use county and federal resources to combat the outbreak as best they can with a hypothetical solution.

The project was originally for sophomores, but was moved to MedTech seven years ago.

“As 10th graders, students didn’t have enough physics, biology, and chemistry background to come up with plans that were realistic,” MedTech teacher and project advisor Mika Anderson said.

Students presented their plans to a panel of six judges, some from St. John’s Medical Center, Public Health and Ventura County Medical Center. These professionals’ fields ranged from Public Health to Microbiology, but all were familiar with infectious diseases and prevention.

The diseases chosen for the project change as new ones become more relevant. Some are recycled, but most are different every year. Judge panel veterans are often the ones that suggest new diseases. Because they work in fields that handle infectious diseases, they are the first to see new outbreaks.

“I wanted people that could assess them based on content,” said MedTech teacher and project advisor Mika Anderson. “I wanted someone to actually listen to the presentations and to determine whether or not their solutions were accurate. The best people to do that would be people who work in the field.”

Anderson said she views the project as a “celebration” of the hard work the students have put in all year.

“This is the moment for you to celebrate your knowledge and what you know,” she told the students before they presented.

Junior Elaine Park presented with her group on Thursday on Carbapenem-resistant Enterobacteriaceae. Park’s assigned disease, commonly referred to as CRE, is an illness that “is popping up left and right,” Anderson said. The disease proves fatal for approximately 50 percent of infected persons, reports the Centers for Disease Control and Prevention (CDC).

“It’s basically its name. It’s resistant to Carbapenem, which is one of the strongest antibiotics, which means it’s very hard to treat,” Park said.

Their plan involved quarantining the few infected. Park said that since CRE is not very contagious, and only targets the already ill, there have only been about 100 cases.

Benjamin Limpich and his group presented Thursday with his group on Bacterial Meningococcal, a form of Meningitis that Limpich said is “much worse than normal.”

The outbreak was at a network of colleges and universities in Massachusetts that shared a transportation system. Their plan was to stop the bacteria’s spread by sterilizing the dorm rooms and buses and starting a public awareness campaign.

Limpich said his group met only three or four times, but collaborated using Google Docs. The students worked largely outside of school to create their presentations.

“It worked because a lot of us have busy schedules, and it’s difficult for us to get together outside of school, so it’s a lot more efficient online on Google Docs,” Limpich said.

Anderson said she thinks many of the students’ plans were realistic and would work well in the “real world.”

“Interestingly enough, when they present, about 85 percent of what they come up with is the actual plan being used,” she said. She added that the remaining 15 percent might be due to a lack of knowledge.

Michele Hom, a second year judge and clinical lab scientist at VCMC and St. John’s Hospital, said she thinks the project exposes students to different types of jobs in medicine.

“I think it’s a great segway into different aspects into the medical field […] It’s not just the usual nurse and doctor you think of,” Hom said.

Hom has worked on many of the diseases that students presented on before in her lab.

“Some of [their plans] could possibly work. The CDC is always formulating new plans and each city and county have their own ways to contain them. It depends on the county,” she said.

Dr. Gail Simpson, an infectious disease specialist who works at CMH, has been one of the judges for the presentations for the last five years.

Simpson introduced the “Red Book” to the project this year. The book is a publication by the American Academy of Pediatrics, updated every few years by the Committee of Infectious Diseases.

The students used it to research their diseases, and find information such as records of past outbreaks, a list of symptoms, and treatment.

Although similar, Simpson noted that the way the students were given the project was different than how infectious disease professionals would handle a case.

“They’re being asked: Here’s an outbreak. How do you solve it? Ours is more like, we see the sick person and we have to figure out how they got it, where it came from, and how to stop it from spreading to other people,” Simpson said.

Overall, students said they thought the project was enjoyable and interesting.

Limpich summarized his experience by saying, “This project is difficult, but fun; stressful, but rewarding.”