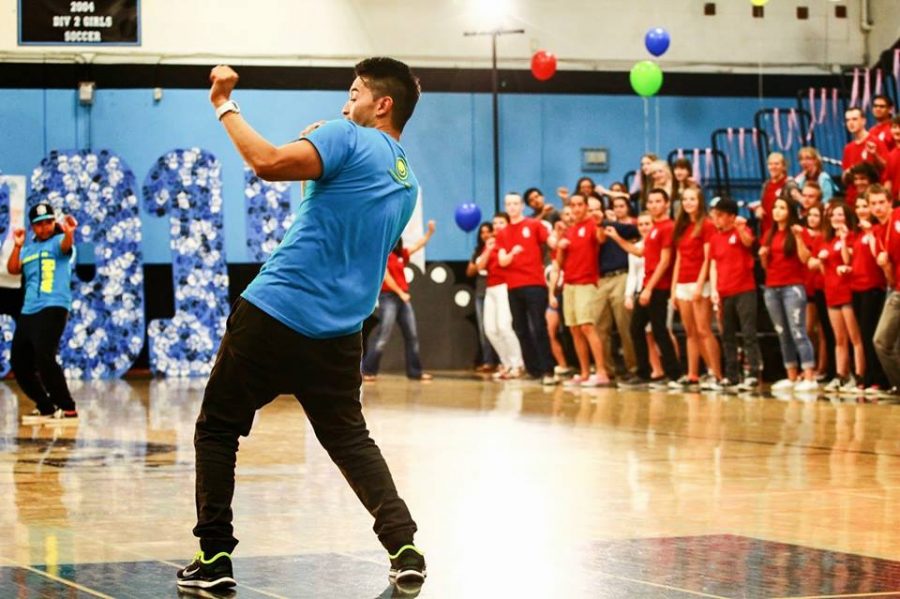 Renaissance Rally 2014 from The Foothill Dragon Press on Vimeo.

Each semester, Foothill congratulates its students who earn a 3.0 grade point average or higher on their academic achievement. This semester all students watched and participated in an assembly called “Happiness is Now.” The rallies are also a way to reach students who have not achieved “B” average.

Students gathered and walked the 0.8 mile stretch to Buena High School. The students and staff took multiple routes and were directed by police and volunteers to ensure everyone a safe trek to the other high school.

Junior Baylee Gatlin didn’t mind the walk. “It really wasn’t that bad. I’m wearing sandals and I’m fine,” she said. “Happiness is Now” is a nonprofit organization that specializes in motivational presentations and after-school dance crew programs endorsed by public and private schools.

The group was founded by Danny V. Batimana, a professional speaker with the Movement Talent Agency (MTA) and the CEO and founder of Happiness is NOW Inc.

“Happiness is Now is my personal journey created for me to find my happiness, and once I started my path, I wanted to share it with the youth and help them find their path,” Batimana said.

Batimana has created what he believes is the formula to happiness.

“The formula I have come up with is finding your passion, along with hard work, leads to happiness which leads to success,” he said. “Happiness is Now” was formed 20 years ago at Cal State Fullerton by a dance crew.

The group grew to have 57 members who compete at the collegiate level, and also perform to inspire youth. The dance members are all volunteers and enjoy finding their own happiness in what they do.

“We get to travel and we get to meet as many youth as we can and honestly it is medicine for their happiness and it brings them balance,” Batimana said.

Batimana’s goal is to inspire as many youth as possible and to help them find what their passion is about.

“[The goal is to] really ingrain in their head that success is a measure of how happy you are, then I have done my job,” he said. “And so if we can change this then I think we will have happier students that turn into a happier adults, that will turn this into a happier world.”

A video celebrating happiness on campus featuring students and faculty dancing along to Pharrell Williams’ ‘Happy’ was played for students to kick off the rally.

Melanie ‘Captain’ Lindsey then spoke of former Foothill teacher Chris Prewitt, who was killed while jogging Sunday morning after being hit by a car outside of Ventura. The former Buena water polo coach was an assistant principal at DeAnza Academy of Technology and Arts (DATA) middle school. In honor of Prewitt, students did what they called the “Prewitt cheer” every time a student was recognized.

Junior Elianna Zambrano enjoyed incorporating the chance to honor Prewitt as an entire school through happiness.

“[My favorite part was] the dancing and also the memories and experiences that we got to remember about Mr. Prewitt. I just thought it was really touching and it was really great,” Zambrano said.

History teacher Claire Adams also believed that honoring Prewitt was a meaningful addition to the rally.

“From a teacher’s perspective, the rally was such a reminder of Prewitt, and we really needed [it] to remember him in a happy light,” said Adams.

During the rally, ASB–on behalf of the teachers–recognized the students for their accomplishments so far this year and the students performed the Prewitt cheer to honor them. Lindsey used this time to incorporate the recognition of students because she feels that it is important to bring that aspect back into Renaissance rallies at Foothill.

“The past Renaissance rallies have been missing recognition we have had the carnivals, and those are great because everybody gets to participate and they have fun and be on the bounce houses, but we have really been missing that recognition part and that was the part that I really wanted to bring back is that celebration of the accomplishments of the amazing students we have on campus,” Lindsey said.

………………………………. Lindsey wants to hold this type of Renaissance rally again. She hopes to have a carnival rally in the fall and a recognition rally in the spring to make the students feel recognized for their successes throughout the year.

“My passion is to get back to what a real Renaissance rally looks like, but that doesn’t mean I’m taking the carnival away, that’s not the goal, the goal is to do one of each,” Lindsey said. “We want kids to know that we honor and celebrate their accomplishments, that part has to come back.”

Lindsey also hoped that the “Happiness is Now” performance would encourage the students to find their passion and not feel that they need to go in a certain direction to find success.

“I really thought that the idea of telling kids it’s ok to not be cookie cutter success, and it’s okay for them to have a passion and that passion to be their success,” she said. “And I wanted that to be the message for our campus because our campus is so stressed about SATs and ACTs and going to the right colleges and they need to know that it is okay for them to go to different places and have different paths and that was the message I wanted Danny to bring.”

Like other students, Zambrano enjoyed getting to get up and dance and have fun. “I thought it was really fun. I liked getting up and dancing. I was laughing so hard I cried,” she said. Sophomore Spencer Witrock was surprised he enjoyed the rally, and hopes that it continues as it made him happy.

Senior Emily Schwerdtfeger was also skeptical about the rally at first, but changed her mind after the event.

“At first I wasn’t very excited about it, mainly because I’m a senior and a lot of seniors aren’t super enthusiastic their last year, but going into the rally it was definitely better than what I expected,” Schwerdtfeger said. “It wasn’t as cheesy as I thought it was going to be which was good and seeing the whole school together, how much spirit we actually had, [it] definitely changed my opinion.”

Other students still preferred the original rally to the new one, however. Sophomore Rachel Peek believes the rally should have stayed at Foothill.

“I didn’t like it all because I didn’t like walking to Buena and being in someone else’s gym,” Peek said. “I think we could have done that here and it would have been more fun being in our own little environment.”

Gatlin on the other hand enjoyed experiencing the change of scenery. “I had a lot of fun and I liked it better than the jolly jumpers that we had because, I mean, I never really went on those and if I did it was for a little,” she said. “It was just a lot more fun to go and be in a different environment.”

For senior Holly Guzman, the rally was a chance to remind students of the “exceedingly awesome” teachers and faculty who work at Foothill. She said she was pleased overall by the inclusiveness of the new rally, and believed many students shared her enjoyment.

“I thought it was awesome how they incorporated everybody,” Guzman said. “It was such a close, intimate atmosphere for it being such a big rally. As for the students, it looked like everybody was happy, like we reached the ‘happiness goal.’”