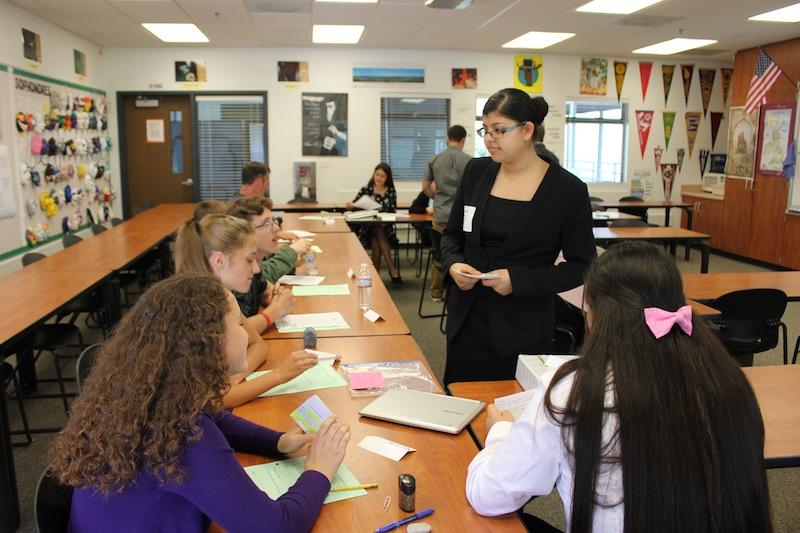 “Lets get this party started,” AP Government and Honors World History teacher Cherie Eulau said to the twelve freshman in her classroom on Monday afternoon, prompting the start of the second “America Eats” 9th-grade Project.

“America Eats” is a project that takes a look at the American food system, analyzing the economic, environmental, consumer, and producer impacts on eight different topics:

These topics were assigned to the freshman from chapters of the film Food Inc.

“In terms of content, it is all about our food system. In terms of our activities, it is looking at critical thinking, and it is literally critical thinking and action. Students are taught to argue pro and con, no matter what they personally believe, and we go into making claims, evidence, and what the impact is,” said Kristen Pelfrey, an EDA teacher who is also a collaborating teacher in charge of the 9th grade project.

The “America Eats” project was implemented last year, but there were some changes made to the project this year. Conni Carr, an EDA teacher who is the other collaborating teacher in charge of the 9th-grade project, said that they changed the project to benefit the students more.

“This year we gave more lead time so the students would have more preparation time and more support. We gave lots of support and scaffolding in EDA, English, Health and Biology; more than last year, because we learned a lot from last year. I think the students had the opportunity to be better prepared. I just think there was more depth this year, because we knew what to expect,” Carr said.

However, these changes didn’t prevent some challenges from arising.

“As always, trying to make sure everyone is on the same page when everybody has other meetings to go to can be difficult. And always the challenge is taking the kids from point ‘A’ to point ‘wherever they can get to,’ but that is the fun part of teaching,” Pelfrey said.

The project was spread out over four of the freshmen classes: Health, EDA, Biology and English.

“The content itself for America Eats comes from Food Inc., so a lot of that is supported through the health curriculum, a lot of the science comes out of the biology curriculum, the whole idea of preparing for a speech is an english class standard, their fourth quarter benchmark, research is always in EDA,” Carr said.

In Eulau’s class, twelve freshmen were placed in a group either pro or con for the proposal they were assigned. Senior Brianna Houska, a speech student, monitored the debate alone with Eulau.

Each student was assigned a number that signified when they would speak, where they gave their two to three minute speech. Then, the opposing side could huddle up and decide what questions they wanted to ask, followed by a one minute question and answer session.

The proposal in this classroom was a 5% sales tax increase on unhealthy foods, where the tax revenue would be implemented and used to subsidize healthy food. Pro-speakers discussed the obesity and fast food epidemic America is facing and how this tax would decrease obesity and obesity-related diseases, how it would benefit small farmers and that for a healthier future we need to implement this. Con-speakers identified the vagueness of the proposal as to what exactly defines “unhealthy,” that it is unsustainable, and would hurt the poor and homeless.

“I think they did really well, I mean usually think of freshman as basically overgrown middle schoolers, but they were very articulate and you could tell their knew the intricacies of the resolution they were discussing,” Houska said.

Freshman Nicholas Dela Cruz, who was a con-speaker on the subject, thought that he debated very well, despite the fact that he felt only half as prepared as he thought he should have been.

“I think I did really well overall. I feel like the points I brought up were not easily countered and I countered quite a few points,” Dela Cruz said.

Freshman Charlotte Cook, who was a pro-speaker, also thought that her side debated very well.

“I didn’t think that I was that prepared. I did a lot of research but I didn’t think I was as prepared as I was. Once we were in the debate you could think of a lot more things,” Cook said. “I have learned that it is a lot easier to think on the spot when you feel strongly about something than when you think on the spot about something that you don’t really understand the topic.”

Eulau though that the project had improved from last year, but could still be changed to benefit the students more.

“I thought they did well, considering I was really concerned about some of my 9th-grade FIRE students, when it just didn’t seem that they had a lot of facts at their fingertips. But I thought ultimately they brought up some sophisticated arguments about lobbying and subsidies and for 9th-graders I think they have a sophisticated understanding, although a lot of it was based off of Food Nations and Food Inc.,” she said. “However, I would like more time for questions, and a conclusion, something for them to wrap it up and make their main points.”

After doing the project, Pelfrey and Carr hope that the students will be more confident in their speaking abilities, more comfortable challenging others opinions, and have improved their own ability to be persuasive through actual evidence.

“They should feel confident, they can learn and apply what they learn. They should know that most adults never had to do anything like this when they were 14, and they should know that this is a real work activity, and they did it,” Pelfrey said. “and I think it’s a real bonding experience. The entire class goes through this trial by fire, and they all find out, ‘You know what, I can do this.’”