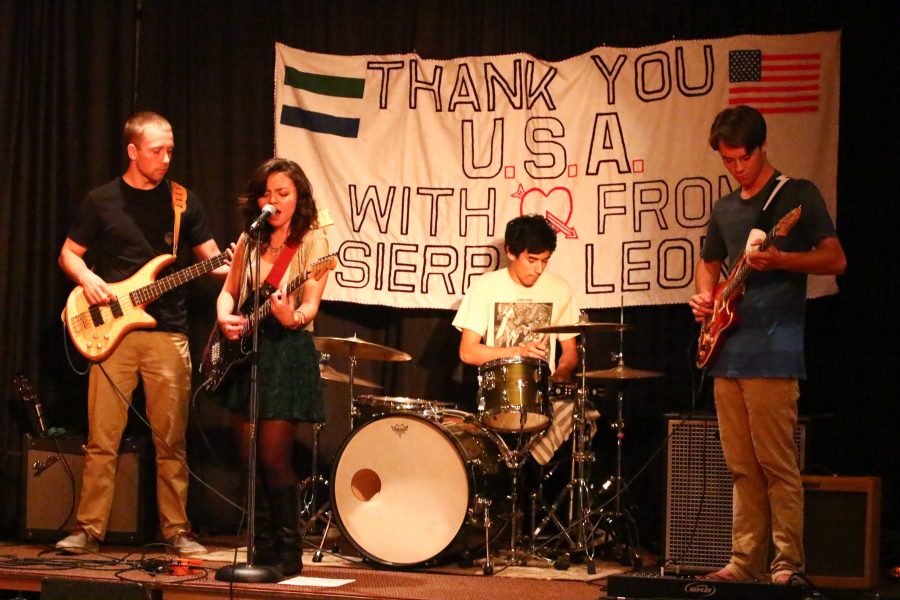 When Jim Phledging, a board member for West Africa Community Missions, fell in a hole and broke his arm amidst his trip to Africa, he went to the emergency room, only to find that he was the only patient there. Not one Sierra Leone citizen could afford to go to an emergency room. Organizations like Schools for Salone and the West Africa Community Missions work to help Sierra Leone after the civil war that ended in 2002.

“The money goes towards the two organizations and it will be split 50/50,” said Foothill senior Tara Yanez, who has traveled to Sierra Leone multiple times through the West Africa Community Missions. “Basically all the money is split to go towards educational purposes, medical and building, depending which organization.”

Lex Rule kicked off the night, playing acoustic covers of “Fly My To The Moon” by Frank Sinatra, “Faithfully” by Journey, “Use Somebody” by Kings of Leon, and “Billy Jean” by Michael Jackson. Emily Sim, a senior at Foothill, loved hearing Lex Rule sing at the concert last year, and was excited to see her perform again this year.

“I think this is a really good cause and besides Tara pestering me about it, I really like the music and I wanted to support local bands and their cause and what they do,” Sim said. “I am a fangirl for Lex Rule. Her voice is just amazing.”

Rule ended with “My Girl,” which she changed to “My Boy,” by the Temptations.

Inertia took the stage next, with a more upbeat and folksy sound. Inertia sang mostly original songs that they wrote, like “It’s Not Okay,” and covers of “Love Potion #9” by the Searchers and “Wagon Wheel” by Old Crow Medicine Show. Their music had the crowd up and dancing the whole time. Senior Noah Davis especially liked this music.

“I wanted to support the cause, the Schools for Salone deal, help fund schools in Africa, and I wanted to hear some good Train music. I liked Inertia’s Train songs. That is good music right there,” Davis said.

After Inertia finished performing, Lex Rule came back on stage with The Special Guests. They started off with “She’s Staying,” an original, covers of “Ten Cent Pistol” by the Black Keys and “Give Me One Reason” by Tracy Chapman, and ended with a cover of “Born Under A Bad Sign” by Albert King.

Sophomore Nyssa Torres is a part of the club that meets at Foothill and helped organize the benefit concert.

“I am one of the volunteers, I’m in the club, we raise awareness,” Torres said. “I plan on continuing with the club at school in the future.”

There was also a presentation to explain to the two organizations and what they do for Sierra Leone. First, Yanez explained what the West Africa Community Missions does in Sierra Leone, and the importance of their work. She has been to Sierra Leone three times, and will be going to Gambia to do medical work in two weeks.

“I know it doesn’t necessarily affect people in their everyday lives, I think it is really important to be culturally aware and I think that people genuinely do know what is going on and they care to some extent. I think that people should care because they are people. No one would like if their brother or sister were starving, or if they had some terrible bone infection or HIV or AIDS,” Yanez said. “I think that once you think about it, it kind of hits home in the sense that they are peoples brothers and sister and family members. They are people just like us, they have feelings.”

Next, Foothill world history and AP government teacher Cherie Eulau spoke about Schools for Salone and their work in Sierra Leone. Eulau and other Foothill teachers brought the Schools for Salone cause to Foothill after they visited the Lungi Village in 2010, and worked to raise $56,000 to build a school in the village.

Yanez also brought a special guest to the benefit concert. While she was in Sierra Leone, she met Joshua Edward Saffe, a citizen of Sierra Leone who now lives in California and goes to Moorpark College. Saffe came to the benefit concert and talked about the huge influence that organizations like Schools for Salone and West Africa Community Missions have had on their country.

“Well, it helps benefit us one, financially, because schools and teachers are not wealthy in the country and when these guys come with school materials and being part of it with the children and teachers, it just brings them joy and happiness and it inspires a lot of kids to go and keep doing what they should do and go to school and learn and be a kid,” he said.

Eulau believes that even though the problems in countries like Sierra Leone may not affect us, by helping them we are helping ourselves.

“We certainly have problems in America that we need to address, but they are nothing compared to the problems that Sierra Leone faces. Really, if you’re looking at philanthropy you are getting a lot of bang for your buck, for $50,000 you can build an entire school, or for $10,000 you can run workshops for two villages and feed everybody and feed all the children,” she said. “I just like this wider scope of we are all on this planet together, if we help other people we are helping ourselves and making the whole planet a better place, and I honestly think that helps us too.”

Even though students that are extremely passionate about the cause, like Yanez, will be graduating this year, Eulau still has hope for the program.

“My hope is that the proceeds every year help the workshops for Schools for Salone, or help a student like Tara be able to go to Gambia or Sierra Leone and help the medical missions, because that little bit does make a big difference,” she said.