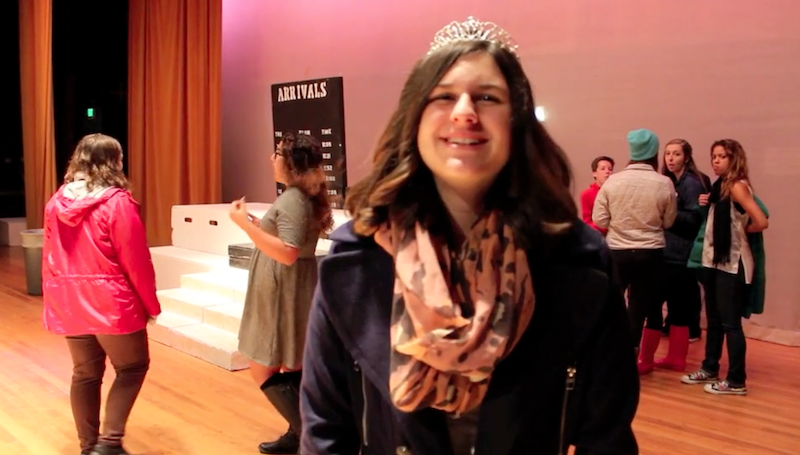 While most high school students are still hitting the snooze button at 6:15 a.m., freshman Olivia Cate is already up and singing Aladdin’s “A Whole New World” at rehearsal.

Cate is a member of Company, a school choir at Ventura High School led by Heidi House with students from all five high schools in Ventura. They have rehearsals every weekday except Wednesday from 6:15 until 7:15 in the morning in the school’s auditorium.

“It’s really fun. I always used to do singing kind of as a hobby, but this kind of makes it to the next level,” Cate said.

She admits that there are days when it’s hard to get up so early.

English and drama teacher Karen Rodrigues is Cate’s F.I.R.E advisor. She said that Cate is a friendly and hardworking student.

“Sometimes I see her as I drive to school in the morning. She’s always bubbly and cheerful, with a big smile on her face,” Rodrigues said. “She has a grit that’s lacking in a lot of students, to not just get up at 6 a.m., but to actually go to class at 6 a.m. every morning. She’s making really good choices for herself.”

Cate was also a member of the Crescendo middle school choir last year, which is also directed by Heidi House and sometimes performs alongside Company. She then decided to audition for Company once she began high school.

Cate said that being a part of Company has helped her make new friends while starting high school.

“Coming into a new high school, it’s good to meet new people, but when you’re involved in something as big as this, then you meet even more people and then doing what you like, it makes it even more enjoyable,” she said.

Jacob Barba, a fellow Foothill freshman who is also a member of the choir this year, described Cate as confident, social, and friendly.

“She has a strong and beautiful voice. She can use the techniques very well,” he said.

The students begin most rehearsals with warm ups, then go on to practice the various songs they are working on for the upcoming show. Their next show, which will be on May 30 and 31 this year, will have a Disney theme. They will be performing pieces from “Mary Poppins” and “Brave,” among others.

When she’s not busy with schoolwork or rehearsal, Cate also enjoys art, math, and watching movies.

“I really enjoyed ‘The Hunger Games.’ I’m pretty sure a lot of people do. Well, if I’m being really honest, my favorite movie was probably the One Direction movie because I’m pretty much in love with them,” Cate said, adding that band member Liam Payne is her favorite. “He’s pretty amazing, but I love all of them, of course.”

Cate is glad to be a member of Company, and is grateful for the opportunities and friends it has given her.

“I’ve made a lot of new friends there. A couple of people quit from last semester, but I still kept close friends with them. A lot of them are older than me, which is fine, I guess. It’s pretty cool to have kind of mentors, because they’ve been there longer than I have,” she said. “It’s been really fun in company. I’ve really enjoyed myself.”