Opinion: The Military-Industrial Complex: Imperialism of the 21st Century 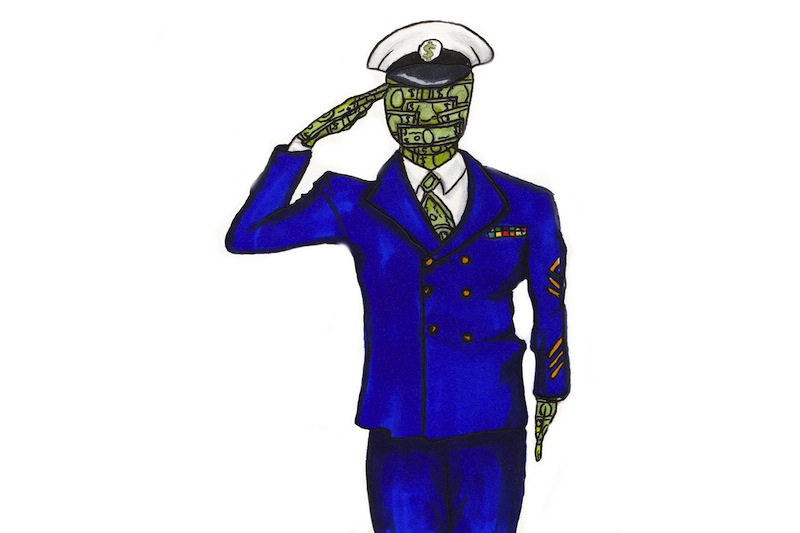 As the dreaded tax season sneaks up upon America, Uncle Sam’s indomitable finger pointing firmly at your wheezy wallet, it’s only fair to ask where all your hard-earned green is headed.

Many cynically lament on where they believe it will go: social welfare for the “lazy” poor, Obamacare for “socialist” America, subsidiaries for the malevolent Monsanto, etc.

Yet the curious thing is both sides of the spectrum seldom stop to question one of federal revenue’s biggest recipients: the United States military.

Close to 47 percent of the Fiscal Year 2014 budget is planned to go to military-related spending.  47 percent.  That’s 47 cents of every tax dollar going to building and maintaining an army and prolonging our involvement in foreign wars where most Americans no longer want to be and where most foreigners don’t want us.

Federal websites, however, show a very different figure, something more like 24 percent spent on the military, veterans and foreign affairs.  Only after further investigation does one realize how deceptive this figure is.

These federal figures are easily beguiling, as they include Social Security Trust Fund payments, something they started doing during the Vietnam War to water down the military’s massive fund in comparison.  Additionally they cloak past military spending, or repayment of debt accumulated on military related grounds, under broad nonmilitary spending categories.

As a newly established taxpayer, I certainly feel outraged that the government forcibly takes 8 percent of my income, and uses 47 percent for modern American imperialism that I do not support, when it could be used domestically for a much better cause, i.e. education, health care.

Still, no one can say we weren’t warned. Dwight Eisenhower predicted the future of America 53 years ago: overcome by warmongering capitalists exploiting tax payer’s money in the government’s constant effort to remain the biggest power in the world—the parasitic symbiosis he accurately deemed the military-industrial complex.

This famous speech, marred and proven by the skyrocketing Cold War, was a dire prediction of America’s fate, and it came true.  It remains true.  And we let it happen.

I mean, come on. This is Dwight Eisenhower, Ike, the five star general of WWII, the hero of D-Day, one of America’s greatest military minds and generals warning us against the horrors of war and the menacing threat of developing bigger and badder guns, explosives, drones, and other instruments of destruction the public would probably shriek at discovering.  That should mean something.

The military-industrial complex, a union of big business defense contractors and the armed forces, began with the Manhattan Project, developing the atomic bomb which continued on to define an era of mutually assured destruction in a Cold War life.

But the nuke was only the beginning. Well past WWII and the Cold War, the nation’s need for military spending has diminished, yet we continue to buy new toys for our boys in uniform. Our scientists still tinker with destructive force, inventing the most pragmatic yet devastating weapons to date.

It’s like we’ve been playing the board game War; everyone knows how long that game lasts yet no one ever seems to finish. Well, neither can the United States. When countries get sick of playing with us, or simply can’t anymore, we drag someone else in with us, hoping it will occupy us for a good decade or so.

Companies such as Lockheed Martin and Northrop Grumman who dubiously lobby and market their war products, create booming weapons that often sell for millions a pop, each one increasingly efficient at taking lives, making it seem much like something from a terrifying sci-fi movie, weapons not even alien invaders would use and feel good about.

But the armed forces chomp at the bit, ravenous, smelling blood in the water. Call of Duty-infused kids beg their parents, “Please pop, can I go? Can I?”

It’s truly terrifying how dehumanizing these weapons technologies are, and how easy it has become to take lives without thinking twice.

One of the most upsetting things about the military-industrial dynamic, and the United States’ massive budget for the military, is the fact that this spending frequently resides under the title of “defense” spending.

There’s truly nothing defensive about it.  The United States has been directly attacked only twice: once at Pearl Harbor and once at the Twin Towers, two dates that will live in infamy and in American hearts for centuries.

I’m not minimizing these attacks and their causes of American casualties, but the fact is the latter incident was not even provoked directly by one nation, and yet we manufactured wars in two countries, one of which we’re still tied up in to this day.

Post WWII America has been consumed in the business of pre-emptive strikes and forcefully fighting for imperialist influence.  We are “defending” nothing but the bloated billion dollar salaries of a few government and business executives.  In fact, we are endangering not only thousands and thousands of foreign civilians’ lives, something we unfortunately seem to care little about, but also thousands of American lives.

So as our affairs in the Middle East hopefully wind down to an end, I start to wonder…where to next?

One can only hope that Eisenhower’s prophetic warning finally kicks in, that we realize the errors of our ways, the damages of war to the world community and to ourselves.

There are many “wars” to fight, but above all, it’s time to fight the war on war.