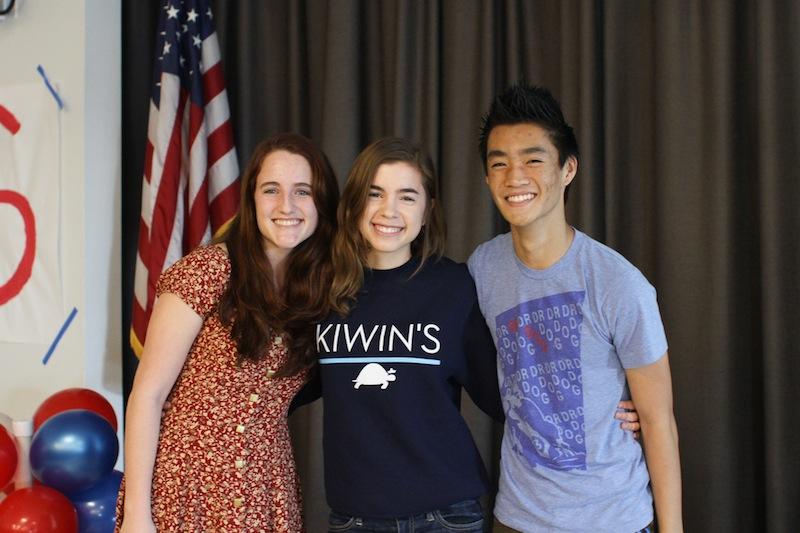 The Seniors Only Academic Rally, or S.O.A.R was held today in Spirito hall. The students played games, watched an inspirational video, and received recognition for their efforts.

The Foothill staff nominated students who they felt fit into five categories: Most Achieved, Most Improved, Most Participatory, Most Inspirational, and Scholar Artists. The chosen students were given a certificate and a gift card at the event.

Afterwards, the valedictorians and salutatorians were announced.

Combined, there were 12 students who met the criteria, a significant increase from last year’s four.

The valedictorian is traditionally the single top-ranking student at a school, with Salutatorian being the runner up. However, Foothill aims to award the title to any student with a 4.9 GPA.

When asked whether she had always dreamed of being at the top of her class, Ami Ballmer said “I kinda had it in the back of my mind as something that was a possibility, but I tried really hard to not put too much pressure on myself.”

Valedictorian Glenda Marshall said her favorite high school moments were all in journalism. She fondly recalled fun times she had at national conferences she attended in Boston and New York with her peers.

“Everything from journalism really sticks out to me actually,” Marshall said. “It’s a really great program.”

Reflecting back on her experiences, Marshall said she would tell her freshman self to go to dances, join Speech and Debate, and not to dwell on small mistakes.

Aysen Tan, the third of the valedictorians, said that sometimes AP and Honors classes are difficult, but you just have to stick with them. ”I did all the AP classes. I was really debating whether to take AP Literature this year, and I just decided to go for it,” he said.

“When I went into high school, it was actually my goal to have a very low GPA. But then my parents intervened and made me pass all my classes,” Egan said, tongue-in-cheek. “I’m not disappointed that I didn’t make Valedictorian. You know what they say – first the worst, second the best.”

Students were also shown a TED talk by Maysood Zayid about how she learned to walk despite her cerebral palsy, which is a rare and tremendous feat, showing that nothing is impossible if you work for it.

Senior adviser Melanie ‘Captain’ Lindsey told the class that although it may be tough to maintain focus during the last few months of school they should try and finish strong.

“You need to remember that you are the reason your path may be a little crooked,” she said. “Some of you may not get into that one school that you had to get into, but maybe that’s not the right path. Maybe what you need to do is learn to find a little joy in the journey.”

The class played fun games like “Guess the Historical Figure,” where students were separated into “North” and “South” and quizzed on their knowledge of U.S. History. They also participated in a patriotic song sing-off.

Once everything had been announced, the senior class went out to the quad to enjoy American-flag patterned cake and toasted with apple cider. They also made Weepuls, small fuzzy creatures made of pompoms, googly eyes, and pipe cleaners.

“On an individual level, I’ve really gotten to know a lot of these kids. I don’t think we’ve had a class this well-rounded and likeable in a long time,” art teacher Justin Frazier said. “This is going to be a class that I’m really going to miss.”