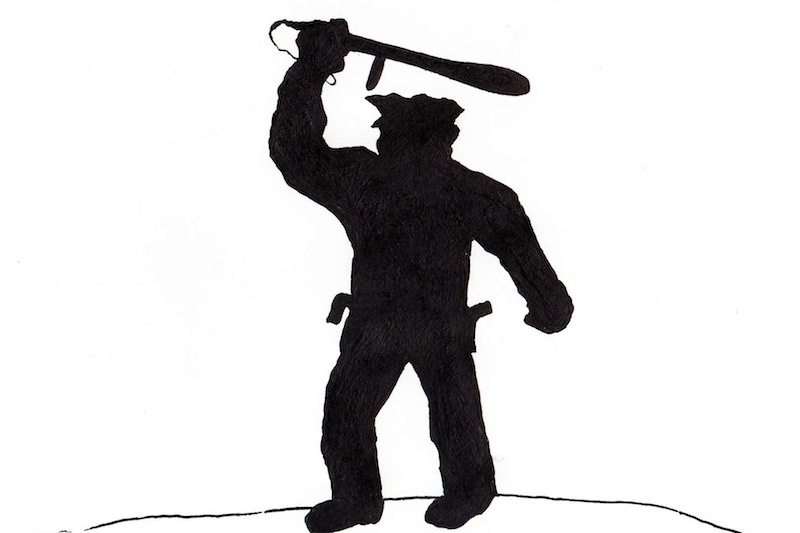 You’re walking around town, trying to enjoy your day, when all of a sudden you look ahead and it’s that one homeless guy, the loud one with the big beard and tattoo who always seems to be yelling or talking to himself or begging for some change.

You inch forward reluctantly; you can’t turn back now, the beast has smelled his prey and will pounce at the sign of fear. Past him you go, trying to avoid eye contact, when he suddenly starts causing a scene, yelling at you for no apparent reason.

Maybe he doesn’t like the color you’re wearing, the look you gave him, the fact that you didn’t give him a buck. Who knows what goes through the mind of a homeless “man.”

He’s no more a man than a rabid dog, so as he refuses to stop, naturally, you call the cops to deal with the situation.

Out come the cops, and after giving him one chance to stop, upon which he does not, they take out their batons, their high voltage Tasers, their bottled up rage and mercilessly beat the agitator to death.

Wait, what? Now might be an appropriate time for a Ron Burgandy meme…surely it escalated rather quickly. Last time I checked, we did not live in Soviet Russia.

Apparently however, Fullerton, California resides in a jurisdiction where policemen are paid to murder the innocent–and get away with it.

Police officers: hands of the law, upholders of peace, fighters of crimes, guardian angels with guns, repeatedly granted immunity when they brutally violate the very laws they enforce?

The prior incident I described is surprisingly not fiction. In June 2011 that homeless man, a schizophrenic named Kelly Thomas, was brutally beaten into a coma and subsequently died in the hospital five days after the incident.

Pictures of Thomas’ horrifying police-inflicted injuries, as well as the 18 minute surveillance video of the actual carnage, are extremely disturbing to see and watch.

Personally, I could make it through no more than two minutes of Thomas screaming “Okay, I’m sorry!” and “I can’t breathe,” as the police officers attempted to “subdue” him.  Thomas was clearly subdued a mere 45 seconds into the video.

Anyone who watches the video would quickly and logically testify to the absolute and unprecedented brutality of the police officers, chiefly Manny Ramos and Jay Cicinelli. It is upsetting to think of what sort of conniving the officers’ DA’s must have pulled to convince the jury otherwise, but nonetheless, all officers involved have been acquitted as of this month, fleeing justice at the expense of three years of wasted tax money. Worse yet, some of the officers even have the audacity to try and become reinstated onto the force.

So, what lies behind this unjust verdict? Many things certainly: a dehumanizing fear of homeless people caused by the widespread self-damnation of being poor, a systematic failure to successfully deal with mental disabilities, a black and white glorification of police officers, a society which solves its problems by incarcerating misfits and agitators, and most importantly, the placing of police officers above the law.

Everyone has some kind of innate fear of police officers, whether they have reason to or not. Cop cars stick out like a wolf among sheep. I can concur personally that whenever I see a law enforcement vehicle while driving around, I feel as if I’ve done something wrong, and as if magically the tempo of traffic slows down to five miles below the speed limit.

Now, this silly fear and automatic self-correction most feel is usually irrational, arising because we don’t want to be one of the victims of the city’s daily quota for making revenue off of traffic tickets. However, recent statistics prove that even the most minor misdemeanor may make cop-phobia rational, even realistic.

I do not mean to slander all law men in uniform. Many truly do their job every day, courageously putting themselves in harms way in order to protect the public from dangerous crime and criminals.

In light of this, a surprising amount of police brutality and misconduct cases arise everyday, and finding a “bad cop” may not be an all so daunting task.  The National Police Misconduct Statistics and Reporting Project (NPMSRP) documents all cases of police misconduct, records them, and displays them to the public, usually day-by-day.

Some may argue that such incidents are simply the nature of the game, and that corrupt police officers are few and far between, but I beg to differ.

Police officers are no less human than the criminals they incarcerate or the homeless people they deal with.

Cops are human beings with human impulses. They have lives at home which they think about, quarrels with family which put them in bad moods, goals and aspirations. Dealing with criminals and delinquents every day, it’s impossible not to become callous, just as it’s nearly impossible to not let one’s emotions get tied into how they deal with a situation.

For this reason, I fear that law enforcement agents become more volatile over time. The more punks they see, the more annoyed they’re going to get, and the less they’re going to treat them like humans, leading to outrageous tragedies such as the case of Thomas.

It’s time we hold our police officers up to the same laws they hold us to. Police departments should require annual evaluations on the personality and conduct of their officers, as well as to commend restrained force whenever possible.

As experts believe the number of police and detective dramas on air number in the billions, it’s easy to have a clear cut view about Cops and Robbers.

In reality however, the lines between right and wrong are often blurred by excessive grey. Maybe the criminal was stealing so that he could support his family. Maybe the culprit had a violent flash of PTSD his four years of servitude to the U.S. military gave him without any post-service support. Maybe the drug dealer sells dope because he grew up in a town where nobody cared whether he lived a day in his life.

Maybe, just maybe, the police officer fired his gun in a bout of fury, killing three hopeless drifters and got away with it.