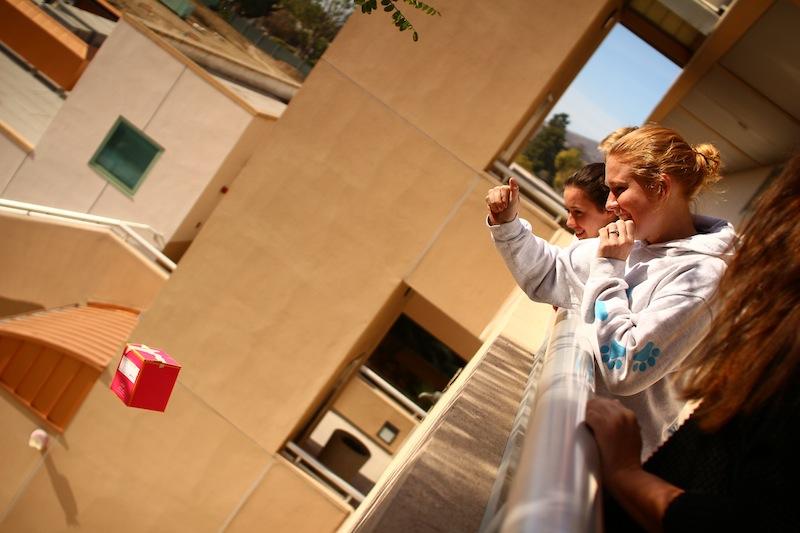 Foothill physics students launched eggs off of a three story building at Ventura College Thursday and Friday. The eggs were encased in homemade contraptions of the students’ own design, applying physics laws learned in the class.

“The project was to drop an egg from 40 feet and have it not break, and use concepts we learned in physics to help us,” senior David Birdwell said.

Structures ranged from a cotton-filled styrofoam cup to a tupperware full of cotton attached to a PVC frame with rubber bands.

Birdwell’s egg easily survived the drop and was based off of space landing technology.

“When he [Weldele] first mentioned it, I thought of the Mars rovers from the early 2000’s. It had a parachute, and there was a capsule and these balloon things that bounced around on Mars,” he said. “So I wanted to mix a couple of those concepts together. The capsule, the parachute to slow it down, and the balloons for a nice landing.”

Students really got into the creativity aspect of the assignment. Friends Bridget Coonan and Amy Bradford wanted to create something entirely new.

“We really wanted to be creative, so we thought using a loaf of sourdough bread would work. We took the loaf and cut out a whole in the top and put the egg in” Coonan said.

“We duct taped it around the bread to make sure the egg was contained,” said Coonan. “Then we didn’t think that was quite enough so we took bagels, cut them in half, and then taped them around it.”

To the surprise of many the duo’s egg also survived.

“We feel really proud of ourselves,” said Coonan.

Physics teacher John Weldele, said that most of the students take the project seriously, although he said there were a few people who just threw something together at the last minute.

Students enjoyed sharing and testing their creations. Weldele said though it’s a creative project, there’s also a lot of learning that goes into it.

“Approximately 70 percent of the eggs made it this year,” Weldele said.

But as they say, you can’t have an omelette without breaking some eggs.