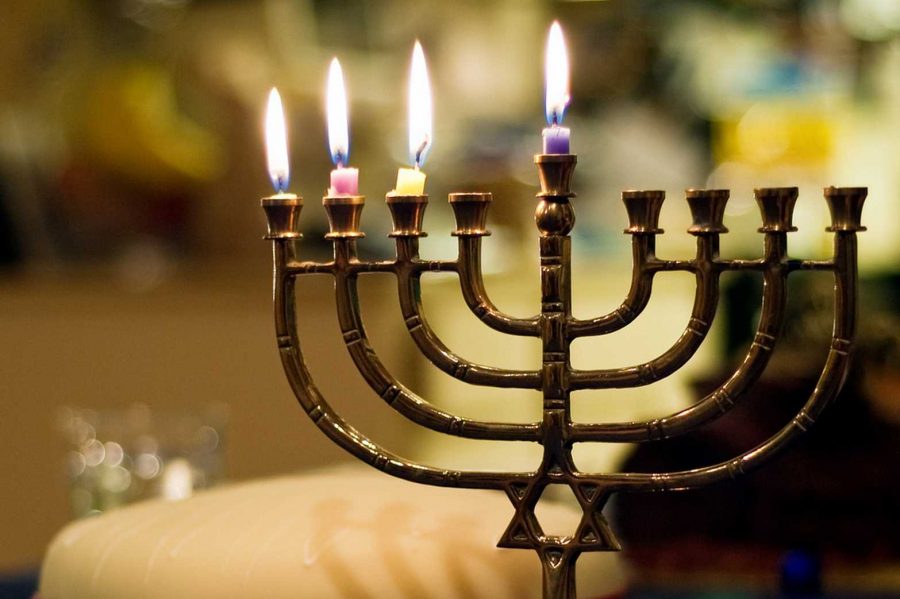 A menorah is lit as part of the Hanukkah celebration. Flickr Creative Commons Credit: David Goehring

This year, while some families were enjoying their Thanksgiving feast, other families were preparing latkes, lighting the menorah, and celebrating Judaism.

Juniors Stevi Pell and Sasha Poirier are Jewish, and in their household, Hanukkah is celebrated with much zeal.

To both students, Hanukkah means coming together with loved ones.

This year, Pell celebrated Hanukkah with her immediate family, as well as her grandparents, aunts, and uncles.

“In my family, [Hanukkah] is about the essence of family values,” Pell said. “Even though a lot of my family lives in Ventura, I don’t get to see them as often as I do around Hanukkah.”

Poirier celebrated Hanukkah with her immediate family and some friends.

“Normally, we’re so busy that we don’t get to talk and interact as much,” Poirier said, “Hanukkah is a way of forcing us to sit down and be together.”

Often symbolized by the menorah, Hanukkah, which was from November 27 to December 5 this year, is also known as Festival of Lights and Festival of Dedication. The dates for Hanukkah do not change on the Jewish calendar, as it always starts from the 25th of Kislev. However, since the Jewish calendar changes yearly according to solar-lunar relationships, the dates of Hanukkah shift on the civil calendar.

Hanukkah celebrates the triumph of the Jewish people for religious freedom against the Syrians in the Maccabean War of 162 BCE. During the course of Hanukkah, a candle on the menorah is lit each day. Jewish people also feast on latkes or other foods fried with oil.

Poirier’s family likes to add twists to the traditional latkes.

“We like to add zucchini to the latkes, and sometimes we add other vegetables too,” she said.

Before the Hanukkah feast, Pell said her family has a tradition of crowding in the kitchen and helping her mother grate potatoes and onions for the latkes.

“We also [eat] jelly donuts because they’re deep fried in oil,” Pell said. “I don’t know if any other [Jewish] families do that.”

Eating foods fried in oil during Hanukkah stems from the miracle of the oil that lighted the menorah for eight days instead of one.

During Hanukkah, the children of the family also play with a dreidel. On a dreidel, the Hebrew letters Nun, Gimel, Hay, and Shin are each inscribed separately on the four sides. These letters are the first letters to the words “Nes gadol hayah sham,” which translates to “A great miracle happened here.”

“[This year,] I got to teach my two little cousins who are three and five how to play the dreidel,” Pell said. “[We] played for chocolate coins.”

During Hanukkah, children receive small gifts over the course of the celebration.

Poirier also celebrates Christmas because her father is Catholic. When asked whether she enjoyed receiving gifts on Hanukkah or Christmas more, Poirier responded, “Hanukkah.”

“It depends on the gift, like if we wanted something big, like a toy or a Patagonia jacket, then we would get that on Christmas,” she explained. “For Hanukkah, we get little gifts over the course of eight days, and it feels more meaningful.”

Poirier also said that gift receiving on Christmas feels too formal and prepared, as presents have to be wrapped and under a tree.

Since Hanukkah is not a national holiday, celebrating it can sometimes be inconvenient for Jewish families with busy schedules. Poirier said that this year was slightly an exception, as part of Hanukkah fell on Thanksgiving. Other days were still hectic, though.

“We couldn’t light the candles before we finished our homework, so it was hard,” Poirier said. “A couple years ago, Hanukkah fell near Christmas, and that was really nice.”