Rubicon’s “See Rock City” draws the audience back in time 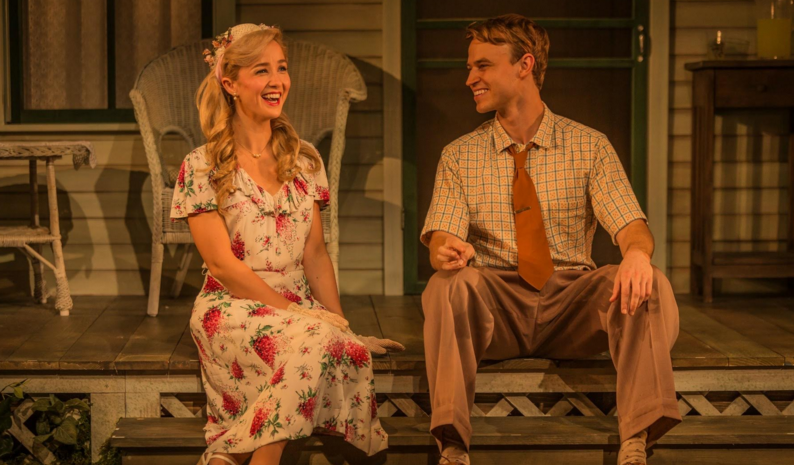 “I think a lot of times when you step outside of yourself and you explore something else, you end up learning something about yourself that you didn’t previously know. And so with each part you do, you hope, I hope, that I get to explore either a part of myself that I want to know more about, or put myself out of my comfort zone so I learn something different

“I think a lot of times when you step outside of yourself and you explore something else, you end up learning something about yourself that you didn’t previously know. And so with each part you do, you hope, I hope, that I get to explore either a part of myself that I want to know more about, or put myself out of my comfort zone so I learn something different,” Erik Odom, the leading male actor portraying Raleigh said in his debut in the production See Rock City.

Brought to you live from Ventura’s own Rubicon Theatre Company, the cast of See Rock City does a spectacular job of embodying the playwright of Arlene Hutton with the directory help from Katharine Farmer, allowing the production to be worthy of its standing ovations and positive critical reviews.

See Rock City is the second segment of a trilogy, following the first of the series Last Train to Nibroc, that was put on at the Rubicon in April of 2015. The story picks up where it last left off, with May (Lily Nicksay) and Raleigh (Erik Odom) returning back home to Kentucky after their honeymoon plans in Rock City are diverted.

First premiering on stage on Jan. 27 and lasting through Feb. 14, See Rock City depicts the experiences of anguish, distress and vexation that May (Lily Nicksay) and Raleigh (Erik Odom) face during wartime. However, these experiences are matched “with a humility and a love so deeply drawn, that their connection only makes them stronger as they learn to make sacrifices for each other,” said Farmer.

The play follows the timeline of World War II, stretching between the years 1940 and 1945. What definitely raises the bar and complexity of this play is that it includes sporadic radio broadcasts throughout the entirety of the production, touching on specific events that occurred during this era. Such events include the introduction of  military conscription in the United States (1940), the declaration of war on the United States by Germany (1941), the invasions of Europe beginning at Normandy (1944) and the Battle of the Bulge ending in German defeat (1945).

Hutton describes how “the Nibroc Trilogy plays weave oft-told family stories with characters based on [her] parents and grandmothers into a fictional plot. Looking at a bigger picture, See Rock City brings us to post-war America, a country on the move during a time of change.”

Nicksay started acting from a very early age, taking part in the film and television industry growing up, and then getting “the bug” for theater. Stepping back during her high school and college years solely to focus on her education and seeing another side of the world, Nicksay “couldn’t stay away” and came back to acting, and has been back in Los Angeles “for about five years now.” She has been spotted in well-known films and television shows like “Killing Animals,” “The Negotiator,” “The Adventures of Rocky and Bullwinkle,” “Boy Meets World,” “The Guardian,” along with several others.

Something that has the ability to make the audience feel a mixture of emotions, to make them laugh, to make them cry, as well as captivate their entire being, making them feel as if they were drawn back in time is truly what defines a good production, and See Rock City does just that!

Citizens from all over Ventura County came out to support the Rubicon’s production and take part in this popular play.

“I saw the first installment of it last year and I enjoyed it so much, my friend and I decided, who I went with last year, decided we’d come and do it again this year, and we can’t wait to see next year’s installment of it.”

“I was really nervous when we started the rehearsals for this play because we had done Last Train to Nibroc here last year and it went so well, and it was so fun, and I learned so much and it had just been such a great experience so I was really hoping that this would turn out well,” Nicksay said.

Odom liked the fact that both characters, May and Raleigh, were able to expand on their characters and portray the same roles a year later.

“The bond between all four characters makes See Rock City a delight to watch and a privilege to direct. The initiative and loving nature of the actors brings a warmth to the play, and the universality of the play’s message speaks to all.”