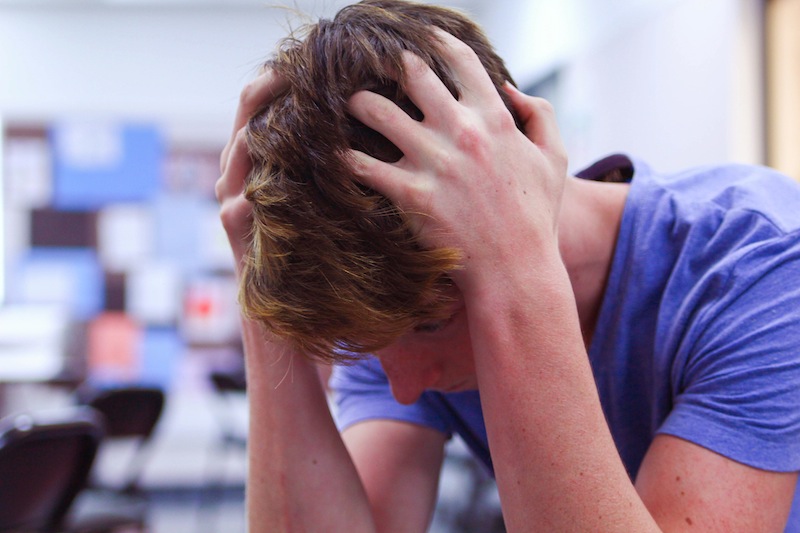 It starts with the racing of the heart. Breathing becomes more and more erratic, hands tighten into clenched fists, and feet pace back and forth in a worried manner.

Junior Johnathan Carriger would undergo this experience whenever he had an anxiety attack.

“It’s kind of like an out of body experience,” he said. “I don’t feel like I’m there completely.”

Anxiety is constant apprehension and often times irrational worrying, and though often linked with depression, varies greatly from it in its symptoms. The constant worrying of anxiety will cause restlessness and muscle tension, unlike depression which makes the individual feel hopeless and act listless.

It is the most common mental health disorder among teens in the U.S. and has several different types, such as social anxiety and generalized anxiety disorder (GAD), which can also contribute to academic anxiety. Although a small level of anxiety can be a healthy motivator, excessive amounts are detrimental and can lower performance level. Today, 25 percent of teens suffer from anxiety but only 18 percent of them receive help.

Carriger first noticed his anxiety when he was 13 years old, however he now acknowledges that he had it from a very young age.

“I would just get really angry and I would hyperventilate a lot over really small things” he said. “Like my sister saying, ‘Why didn’t you clean the kitchen?’ or ‘Why didn’t you do this?’”

When Carriger would become anxious, he became mad and would storm off to his bedroom. This behavior was often triggered from his high irritability , a major symptom of GAD. It was on one of these occasions that he finally realized his anxiety.

He was not the only one who noticed this. Carriger’s family, especially his father, was concerned for him and his well-being; his father urged him to take medication for his anxiety.

“They thought it was a real problem,” Carriger said. “That’s when my dad was like ‘Okay, this needs to stop. You either need to control yourself or we’re gonna get medication [for you].’”

Carriger chose the first suggestion. He taught himself self control by using methods he learned in fifth grade.

“I just tell myself that it’s gonna be okay and that everything’s fine. I start controlling my breathing and counting to ten,” he said. “I go through all of that until my heart rate’s down and I’m starting to breathe normal.”

To this day, Carriger still has some stress from academics and still gets a small amount anxiety from being late, but he knows how to control it efficiently and manage its effects.

There are many healthy ways to reduce and manage anxiety, and one of the most important tips is finding time to truly relax. Many teens are tempted to watch television or go online to unwind after an anxious day, but often times, these activities can actually make teens more tense, because they are false and only temporary forms of relaxation.

“I’m worried that I’ll fail my parents expectations and the expectations I’ve put on myself,” she admitted. “ It usually spirals from there into believing that I’ll mess up my life and be a failure.”

Sleep, thinking positive, and connecting with nature are vital to reduce anxiety. However, the mind can still become anxious even with the help of these factors, and when this happens, one should practice breathing exercises or meditation, which focuses the mind on the present environment, rather than on anxious, irrational thoughts.

A female student at Foothill who did not wish to be identified to protect her own privacy said anxiety is a condition she has always known.

“I have always been really anxious, even as a child, but it intensified as I became older,” she said. “Usually it’s brought on by having to speak in front of people or if I’m going to do something important like a test.”

Slight academic anxiety can motivate students to excel, but high levels of it can cripple students and create vicious cycles of unhealthy apprehension. The student noted that her social anxiety intertwines with her academic anxiety and frustrates her.

“I don’t want to fail. I tell myself that I always have to get at least a B on all of my tests and that I have to talk to people and volunteer in class,” she said. “ I get mad at myself if I don’t reach those goals and I’ll set even higher ones for myself.”

The student admitted struggling not only from individual expectations, but also academic expectations from her parents. So far in high school, she has received good grades, and plays a sport and a musical instrument. However, her academic anxiety blocks her view of her achievements and intensifies her fears.

“I’m worried that I’ll fail my parents expectations and the expectations I’ve put on myself,” she admitted. “ It usually spirals from there into believing that I’ll mess up my life and be a failure.”

Academic pressure can distress any student, and Health teacher Heather Ferris said organization and support at home can contribute to whether or not the student will suffer from anxiety.

“I also see the most organized students who I know have great support [at home] sometimes seem overwhelmed because there is a lot of pressure to do well, which I don’t think comes all from Foothill, but from goals like going to college,” Ferris said.

Ferris, who used to work at a private college preparatory school, explained that while she notices “lots of opportunities, expectations, and competitions” at Foothill, the academic atmosphere is much less straining.

“The pressure [at my past school] was even worse,” she said. “High grades were a topic and priority and in a way it was really unhealthy. It is competitive here, but there, everyone wanted to get into USC or Stanford, and I think [Foothill] is much more balanced.”

When it comes to anxiety, teens feel the need to keep it to themselves and not seek out help or talk to people. Talking to peers can help relieve some of that anxiety. Concerning academic anxiety, students should talk to their teachers because they will often be willing to meet individual needs.

“I think it is important to communicate with your teachers when you’re feeling overwhelmed,” Ferris said. “There are accommodations to be made and you don’t realize it unless you say something.”