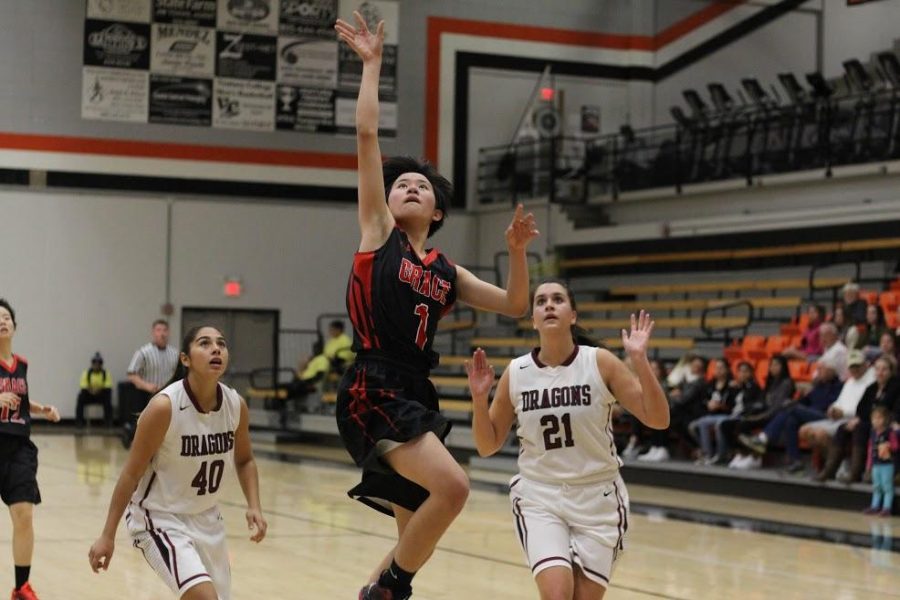 The lights were shining Tuesday night on the Ventura College court with music blasting through the speakers, as Foothill’s girls’ basketball team prepared to bury Grace Brethren 84-9 in their fourth league game. With this win, the Dragons continue their winning streak of 3-0 in league.

Foothill’s and Grace Brethren’s starters both lined up on either side of the half-court line as they prepared for the jump ball. The Dragons immediately got the ball and scored a two-point layup, beginning the game.

The girls continued playing a “fast-paced” offense and defense, keeping the ball away from Grace Brethren throughout the game. With only one minute left in the first quarter, Grace Brethren forfeited a two-point layup to freshman Abby Bova as they had a traveling violation.

Freshman Annika Kinnaman believed she and her team had a good game, but specifically was proud of their many two-point shots.

“I think we played pretty well tonight. We had a lot of layups and pretty good defense overall,” Kinnaman said.

In the last four seconds of the quarter, senior Lexi Woodward scored the last shot, adding two points for Foothill. Closing the first quarter of the game, Foothill was ahead with a score of 31-6.

In the second quarter, freshman Emiline Bova stole the ball from the Lancers and ran it all the way down the court for a two-point layup with no resistance.

Fouled by the Lancers, Abby Bova received a free throw in which she scored one point for the Dragons, and later in the second quarter went on to score a three-point shot.

At the end of the first half, the Dragons were beating the Lancers 63-7.

Coach Edgmond believed that the team did well in getting the ball up and down the court and passing it to each other.

“They really moved the ball, they pushed the ball often and ran the floor, Edgmond said.

After the halftime break, the girls all lined up at the half-court line to jump the ball. The Lancers got the ball and scored their last two points of the game. At the end of the third quarter, the score was 77-9 with the Lancers losing by 68 points.

In the fourth quarter of the game, the Dragons kept a wide gap between them and the Lancers for the rest of the game. The Lancers couldn’t keep up with the Dragons and the victory went to Foothill, with a final score of 84-9.

Kinnaman thought her favorite part of the game was the teamwork they used while playing.

“My favorite part of the game was when we all worked together to slow the game down, and great passing,” Kinnaman said.

Coach Jason Edgmond felt that the team played hard all the way through to the end of the game.

“The girls played really well they came out and imposed their will. They did what they wanted to do,” Edgmond said.

Edgmond felt that the team played a very good defense.

“Obviously they played a good defense, they only gave up nine points. If you’re only giving up nine points you’re defending well,” he said.

He felt the team only had a few minor issues in their game and they played well.

“We turned it over a couple of times, maybe we could’ve gone without those, and then there were a couple of shots that went around the basket. Other than that, the girls played well,” Edgmond said.

Senior and Captain Leah Kopp agreed with Edgmond that, although the team had many steals, they could have played a more solid defense.

“Even though we did a good job at getting steals, I think we could have played a more grounded defense. I think we could’ve gone back to the fundamentals, boxed out more. [We could have] just played more subt[ly] and not give up the easy stuff. We could have [given] up [fewer] points than that,” she said.

However, Kopp thought that the team had a good game, specifically when it came to the fundamentals of passing and steals.

“I think we played [well], I was proud of the way we made steals and we really are good at passing the ball well,” Kopp said, “and I’m just proud of us for continuing to play hard even when the score got kind of […] out of hand.”