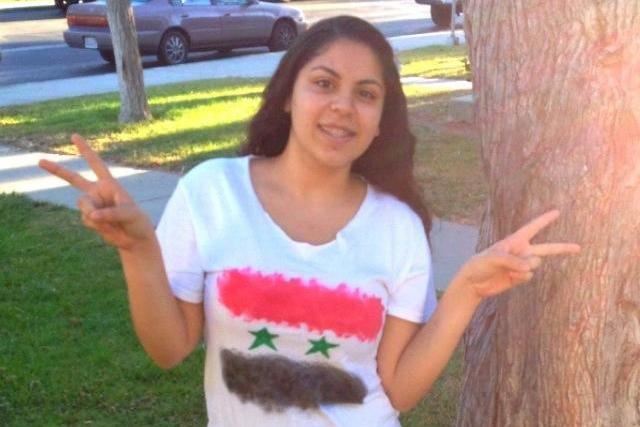 Junior Naja Hawara supports her homeland of Syria during this time of turmoil. Credit:

Junior Naja Hawara was born and raised in Fairouzeh, a small village in Syria, where “everyone knows everyone.” She moved to the United States in fourth grade with her family and still keeps in touch with her Syrian friends and relatives through email and Facebook.

Hawara is a proud protester against U.S. involvement in Syrian affairs, and has been protesting with her family and neighbors,who are also Syrian.
Read Foothill Dragon Press coverage of the Sept. 10 Syrian American protest at the Government Center.
“I can’t imagine anything happening to my homeland, that’s where I grew up,” she said. “I feel as though I’m losing everything.”

Hawara believes that no benefit will stem from U.S. involvement. Furthermore, her Christian relatives and friends in Farauzeh will potentially be harmed if the U.S. does get involved. She said that though leader Assad is Muslim, he is tolerant to Christians, and refuses to persecute them, which makes him extremely unpopular among the untolerant Muslim Syrians.

Hawara is terrified that if the U.S. stops Assad’s leadership, the anti-Christian political parties may take over and harm her Christian friends and family.

“If [anti-Christian groups] did take over, what would happen to my family?” she said, “Even if they tried to move here, it would be difficult, especially for my grandparents and the adults because they’ve lived their whole lives there. And it would also be very, very costly.”

Although there is Muslim and Christian negativity on a national scale, Hawara said her village, Farauzeh, never had any religious disputes. The Muslims and Christians there were very friendly and got along very well.

“When it was Easter, the Muslims would tell us ‘Happy Easter,’ ” Hawara said. “And when they had their Ramadan, we’d [acknowledge] that too. We respected each other.”

Hawara’s family in Syria consists of her grandparents, her aunts and uncles from both sides, and many cousins. She also has friends there as well. Hawara said that her relatives and friends are trying to act calm and are refusing to be scared, despite being in the midst of the currently chaotic country.

“When we talk,” she said, “they act as though nothing is happening. They’re really scared, but they’re acting like everything’s fine, when it’s really not.”